When Tess first entered Simone’s New York studio in Sunday’s Sweetbitter, she — and viewers — couldn’t help but notice an odd furniture choice, right there in the center of the living space: a functioning bathtub, mere steps from the front door.

The set dressing — taken straight from the source material novel — may seem like a whimsical flourish in the apartment of a character who prides herself on being rather practical. But it was based on an actual Brooklyn rental in which author Stephanie Danler, who wrote the book on which the Starz series is based, once lived. 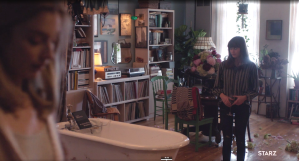 “I had a glorious Williamsburg apartment that was once very cheap, with a bathtub in the kitchen and skylights and a view of the river,” she tells TVLine wistfully. “And I lost it, as every New Yorker has lost their perfect apartment.”

So when the time came to decorate Simone’s East Village dwelling, Danler and Caitlin FitzGerald (who plays the icy restaurant veteran) worked with the show’s production-design and set-dressing teams — as well as with director Shira Piven — to make sure that Simone’s inner sanctum was perfect.

“Every object in that apartment is telling us a crucial story about a very mysterious woman. All of the objects are loaded. So we took it really seriously, and it came out so beautifully,” Danler says.

“I mean, I spent the entire day touching every object,” FitzGerald later says, laughing. “It feels like such an extension of who she is… Stephanie and I placed which books we thought Simone was actively reading, and which records she was listening to, and that was really helpful.”

In particular, FitzGerald recalls choosing The Waves to sit in a spot of honor in the space. “We put Virginia Woolf on the little reading stand that went over her bathtub, and that felt really right,” she says.

She smiles. “It was like designing your fantasy New York apartment.”