Need to catch up? Check out the previous Westworld recap.

Freeze all motor function, because we’ve got everything you need to know about the latest episode of Westworld right here.

Don’t have the time either to watch HBO’s robot drama or slog through a long recap? Here are the three key takeaways from Season 2, Episode 5, “Akane No Mai.” 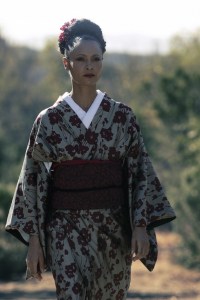 * Shogun World is a lot like Westworld, thanks to Lee being a lazy writer and repurposing several characters/stories. Therefore we meet Akane, who is Shogun World’s Maeve, and Sakura, the young geisha whom Akane considers a surrogate daughter. There’s a touching story where Akane turns a delicate dance into a near-beheading in order to get revenge on the shogun who killed Sakura, but what you really want to leave this storyline knowing is this: Maeve is somehow able to command hosts with just her mind, which is how she gets out of a few violent scrapes during the hour.

* After surveying the hosts destroyed/collected in the Delos sweep, Antoine tells Karl that more than a third of the decommissioned hosts are in essentially “virgin” state, as though they never had experiences/data collected on their drives. Also: Host backups were obliterated when The Cradle was destroyed, “so effectively, we’ve lost a third of our IP in a single sweep,” Karl notes gruffly. 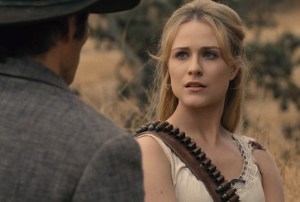 * The night before Dolores and her gang plan to ride the train to The Mesa to find Peter, she and Teddy make love upstairs at the Mariposa. But she decides he’s too kindhearted for the work ahead of them (slaughtering, burning various and sundry to the ground, etc.), so she has some members of her entourage hold him down while the Delos tech who is Dolores’ prisoner captive boosts Teddy’s aggression and such. The tech warns that making such an abrupt change without a reboot is dangerous, but Dolores doesn’t care. “To grow,” she says as she looks on sadly, “we all must suffer.”

There it is! Your updates are now up to date. Have a violently delightful day! (And, if you like, hit the comments with your thoughts on the episode.)