“Th-th-that’s all, folks,” Tuesday’s episode of The Voice told four contestants ahead of Monday’s performance finale. And as we approached the Results Show, the quartet that I predicted to advance — Kyla Jade, Britton Buchanan, Brynn Cartelli and Pryor Baird — was still looking pretty solid. The wild card in the mix seemed to be Kaleb Lee, who’d not only had a great night Monday, but as of 8 am ET Tuesday, was outselling Pryor on iTunes. I still didn’t think he’d ultimately be able to pull off an upset and swipe a spot in the finals from Pryor, a member of Team Blake who’s never been in the bottom. But Kaleb certainly promised to do something he rarely had over the course of Season 14 and make things interesting. (Little did I know at the time what a shock Spensha “I’ll Find a Key, Just Give Me a Few Minutes” Baker had in store!) 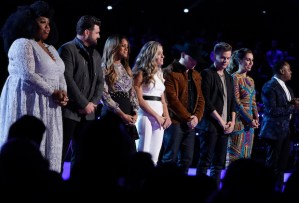 Before we learned which vocalists would be competing for the last save, country hipster Kane Brown took us to a “Heaven” that at first sounded so monotone, I didn’t think he’d make it through the Blinds (and if his performance had been any more laid-back, he’d have needed a recliner); Panic! at the Disco turned up their rollicking swag to 11 till we finally relented and agreed to “Say Amen” (even though we, or at least I, wanted more urgently to say instead, “Do more songs with LOLO”); and Blake performed “I Lived It,” the rare Blake song that I didn’t really like (but still demonstrated the kinda charisma that we’ve always wanted to see in Kaleb). 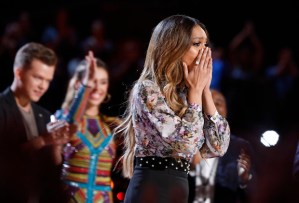 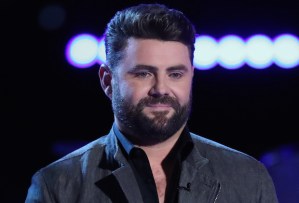 Pryor Baird (Team Blake), “Soulshine” — Grade: B+ | How the hell did the ridiculously inconsistent Spensha make the finals ahead of ol’ Razorblade Larynx?!? While I was scratching my head over that one, Pryor covered the Allman Brothers with a confidence — and moreover a competence — that all but screamed, “[Bleep] y’all, you know I should be in that final.” It was nothing we haven’t heard from him, but maybe that was the problem. I love what he does, but maybe just not enough other people did.

Kaleb Lee (Team Kelly), “Simple Man” — Grade: C | If Kaleb didn’t advance past the Top 8, I wouldn’t have shed any tears. He’d had some fine moments over the course of the season — even as recently as Monday’s performances. But he just lacks the star quality to make us remember his name come Season 15. Here, he was kinda all over the map, perhaps surprised to find himself singing for the save. Kelly did her duty as his coach and danced around like his personal cheerleader, but this seemed like it would be it for him. 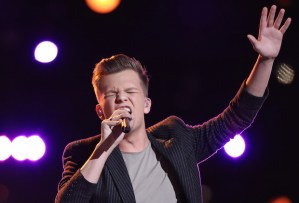 Britton Buchanan (Team Alicia), “Dancing On My Own” — Grade: A- | Before this last sing-off, I was despondent that the JV Matt Damon wasn’t already in the Final Four. W the actual F? Plus, if that many people were gonna vote for Team Blake members (a la Spensha) just because they were on Team Blake, I feared the teen was about to get the chop. Regardless, he turned out a Robyn cover that was stripped down, stunning and the total difference between a karaoke singer on a TV talent show and an actual artist. If he didn’t make the finals, I was ready to revolt. Quietly. Alone. On my couch. (That still counts, right?)

So, what’s your take on the Final Four? Which of the eliminations stung the most? Were you as stunned as I was that Spensha made the finals? Vote in the poll below, then hit the comments.