Ahead of Monday’s Season 14 Semi-Finals of The Voice, I was feeling pretty confident that I already knew which singers would be making up the Final Four: Team Blake’s Pryor Baird and Kyla Jade, Team Alicia’s Britton Buchanan and Team Kelly’s Brynn Cartelli. (If they really do go to the Finals, that isn’t half bad, given my historically spotty track record as a prognosticator; when I made my initial prediction a month ago, I picked three out of those four but had subbed in Jackie Foster for Pryor — a mistake, I now suspect.) So the question for me during the performances by the Top 8 was, did any of the other contestants do anything so stunning that they made me reconsider the quartet that I thought were shoo-ins? That is, did any of the others do something that was so amazing, so unexpected and awesome, that it was going to take away enough votes/downloads, etc., from my anticipated Final Four to allow them to break into the Finals? Aand… did they? Read on.

Brynn Cartelli (Team Kelly), “What the World Needs Now” — Grade: B+ | Recently, Brynn has swung for the fences and, debatably, sometimes hit only as far as the field in front of them. (Which is nothing to sneeze at, but not what she was going for.) Monday, she reeled it way back in, not biting off more than would comfortably fit on a fork but chewing on a bit of glorious, pure pop that often took me right back to her Blind Audition, when for a hot second, the world stopped spinning and all I could think was, “Damn, this kid can sing.” From that a cappella intro forward, Brynn’s performance was just lovely. Not flawless — she ran into a coupla pitch issues, and there was some phrasing that made me go, “Hmm” (maybe because she was doing the Andra Day version, not The Carpenters’). But nonetheless, it made me wish Nelson Riddle was still alive to do an album with her. Final Four for sure.

Pryor Baird (Team Blake) and Kaleb Lee (Team Kelly), “Hillbilly Bone/Hillbilly Deluxe” — Grades: B+ (Pryor), B (Kaleb) | Wonder whose idea it was to pair Pryor and Kaleb for a mash-up — seemed like it could only benefit underdog Kaleb, right? At any rate, though Pryor tore it up in familiar, raspy fashion, Kaleb more than held his own. In fact, it was probably one of his better performances — maybe having Pryor around to play off of loosened him up? Kaleb was so good here that the only real problem he had was that, next to an attention-getter like Pryor, whose voice automatically draws your eyes to him as well as your ears, he came off kinda like an exceptional backup singer, not a star in the making. 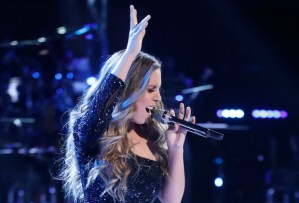 Jackie Foster (Team Alicia), “Here I Go Again” — Grade: C+ | When Jackie said that she was doing Whitesnake, I groaned. It wasn’t that I disliked the song (I like it fine) or that I thought she couldn’t handle it (her recent performances have suggested that she most certainly could). It was just that I couldn’t hear the song without picturing Tawny Kitaen inventing all kinds of new moving violations in that classic music video. So how was the performance itself? It had some terrific moments in it, but it also had moments that were off key and too often sounded less like rocking and more like yelling. I know some of you are really into that intensity — kinda like the way I dig Pryor’s growling, and some of you can’t stand it. But for me, overall, this didn’t really work. Unless ’80s throwbacks miraculously score as well for Jackie as they did for Chloe Kohanski, I think we can safely paraphrase Whoopi Goldberg: Jackie, you in danger, girl. (Oh, and fun fact: Voice musical director Paul Mirkovich was in Whitesnake. #themoreyouknow)

Kyla Jade (Team Blake) and Spensha Baker (Team Blake), “What’s Going On/Rise Up” — Grades: A (Kyla), B+ (Spensha) | Singing first, Spensha sounded like she was going to have one of her excellent “on” nights… then Kyla opened her mouth, and it was like the difference between listening to a singer who’s getting there and a singer who’s already there. That isn’t even a dis of Spensha — she was really good here. But in a situation like this, in which comparisons aren’t likely, they’re an absolute given, “really good” doesn’t sound quite as good next to “really great.” Excellent smash-up, in any case. 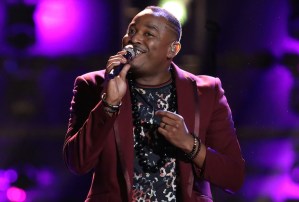 Rayshun LaMarr (Team Adam), “Imagine” — Grade: C- | Hmm… On paper, the Lennon classic seemed a questionable choice for Rayshun. It wasn’t going to allow him to pull out all (or even most of) the stops, as he tends to. And thus far, that’s been a big part of what’s kept saving him. But, as the singer himself said before his performance, “You’ve all seen the entertainer side.” What the ballad was supposed to do was allow him to rein himself in and remind us that behind the showman, there’s a pretty strong singer. Unfortunately, his phrasing was more distracting than Brynn’s had been; there was entirely too much mugging for such a heartfelt number, no matter how emphatically it’s being sung; and while I love a passionate, soulful vocal, I don’t wanna hear “Imagine” shouted. Get that swan song ready, Rayshun.

Spensha Baker (Team Blake), “My Church” — Grade: C | Before her performance, Spensha tearfully told us that she’d really “felt the fire” leading up to showtime. Alas, when she started singing, I feared she was about to flame out. The passion was there, definitely. And she has a big, strong voice that, when she really got on a roll now and then Monday, was thrilling to hear. She just tended to go flat more often than threadbare tires. If I’d had the sound off on the TV and had just been watching the confident way she worked the crowd, I might have thought she’d already won this thing. But since I was watching with the sound on, and even cranked up, I thought instead that she’d almost surely be among the foursome sent packing Tuesday. 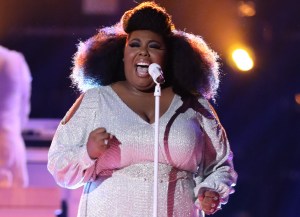 Kyla Jade (Team Blake), “Let It Be” — Grade: A | Religion being mega-important to Kyla, her gospelized version of The Beatles classic “is actually for me,” she told Blake in rehearsal. (Afterwards, he gave her some curious-sounding advice about blowing our brains out and flushing toilets… wait, what? Regardless… ) From the get-go, this was a slam-dunk for Kyla — a Fab Four cover that was gonna not only take us to church but convert us whether we wanted to be converted or not? Come on. She couldn’t have guaranteed her spot in the finals any better if she’d been the only person voting Monday night. Between the notes big enough to shake pews in churches two counties over, the runs that deserve to win gold medals and the control that held it all together, this was an absolute win.

Brynn Cartelli (Team Kelly) and Britton Buchanan (Team Alicia), “FourFiveSeconds/You Can’t Always Get What You Want” — Grades: B (Brynn), B+ (Britton) | Why was there a couch on stage during Brynn and Britton’s performance? Did I miss the part where they explained that this was supposed to be like them jamming in their rec room? Anyhow, their duet worked pretty well, not reinvention-of-the-wheel well or anything, but they sounded good, and their chemistry was really cute. (I still prefer Britton’s duet with Jaclyn Lovey during the Battles.) 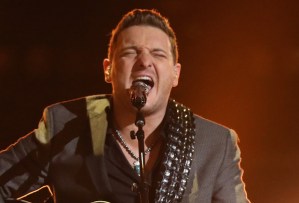 Kaleb Lee (Team Kelly), “It Is Well With My Soul” — Grade: A | Given the spotty response that viewers have had to Kaleb, as well as the personality deficiency that likely contributed to that spotty response, it was beyond smart of him to go the God route Monday. By doing so, he would automatically get at least a portion of the country vote (since he’s country), he’d get some of the religious vote on top of that (since it’s a religious song), and as an added bonus, thanks to a vocal richer with emotion than I think we’ve ever heard it before, he actually sang the hell out of it (if I can say that without it reading like blasphemy). If I didn’t think my Final Four picks had such big fan bases, I’d have said this was the kind of performance that would take any singer to the finals.

Jackie Foster (Team Alicia) and Rayshun LaMarr (Team Adam), “Believer/Radioactive” — Grades: C+ (Jackie), B- (Rayshun) | I went into this performance with some serious trepidation, given the fact that neither Jackie nor Rayshun always has the tightest grip on their vocals at their most rollicking. But this wasn’t nearly the disaster that I’d feared it would be. The twosome gave off enough energy to illuminate the stage even if there hadn’t been a million lights on them, and the shouty choruses were like exciting assaults. Was it great? Mm, no. But for a pair whose singing styles shouldn’t have worked well together at all, it was pretty good. 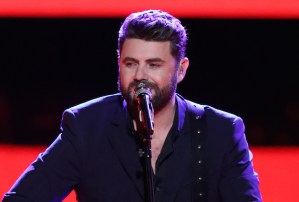 Pryor Baird (Team Blake), “Change the World” — Grade: B | By now, you’re firmly entrenched in one of two camps: Love Pryor or hate ‘im. Me, I love him. I’ve gotten over the initial insincerity that I felt from him and have just come to appreciate his blessed consistency. His Eric Clapton cover Monday wasn’t as much fun as, say, his “Pickin’ Wildflowers,” or the kinda showstopper that makes anyone sit up and reconsider a contestant. But his vocal was solid as ever and arguably more restrained than we’ve ever heard. (See? He does have a volume button!) And if it was only a “polite applause” number rather than a “standing ovation” performance, it didn’t really matter. So long as he never gave us a flashback to his “9 to 5,” his spot in the Finals was never in danger.

Britton Buchanan (Team Alicia), “The Rising” — Grade: B+ | It’s a good thing the jitters never seem to attack Britton, because taking on Bruce Springsteen would surely make almost any vocalist antsy. (Then again, he’d asked his coach if he could cover The Boss himself.) Here, as he always seems to, the teen turned out a performance that came off as raw as it was polished — and that was a good thing. It seemed real, unrehearsed, spontaneous. And had Britton’s place in the Finals ever been in jeopardy, this would surely have put him back in the safe zone. Aside from some iffy la la las, this was a remarkably confident performance. (Now if only Alicia could just make sure he doesn’t ever again back away from the mic before he’s finished a note… )

So, did anyone rock your vote tonight? Whose duet did it for you? Vote in the polls below, then hit the comments.