While the debate over whether Season 14’s Top 12 is awesome or awful continues to rage in the comments sections that follow TVLine’s recaps of The Voice, I’m going to go out on a limb and predict which singers will make the Final Four. 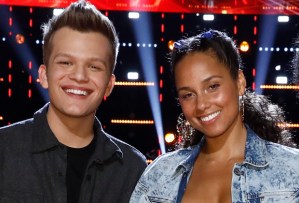 Mind you, it’s a pretty sturdy limb. Since my prognostication is primarily based on the results of our polls — and last season, you were all about eventual winner Chloe Kohanski — I actually feel pretty confident in suggesting that Alicia Keys is headed for another victory: She has two of the four contestants among my — in a way, our — picks. And they are…

Britton Buchanan (Team Alicia Keys) | He’s got the stage presence of an entire band, works the cute-funny combo like nobody’s business, and unlike every other vocalist on this list, he’s yet to turn out a bum note.

Brynn Cartelli (Team Kelly Clarkson) | There are 40-year-olds who don’t handle their nerves as well as this 14-year-old, who not only radiates star power but can go within a single number from rattling the speakers to breaking our hearts.

Jackie Foster (Team Alicia Keys) | Ironic, isn’t it, that the powerhouse rocker that Alicia had been trying to recruit since all the way back in the Blinds lost both her Battle and Knockout rounds to emerge as a frontrunner to win?

Kyla Jade (Team Blake Shelton) | After bringing down the house with “You Don’t Own Me” during the Knockouts, there was no way the sometime JHud backing vocalist was ever again gonna be asked to sing behind someone else.