Sheldon and Amy’s wedding went off with nary a hitch in Thursday’s satisfying, uproarious and heartfelt Big Bang Theory Season 11 finale, although there were a handful of casualties. With so many very special guest stars to accommodate — including Oscar winner Kathy Bates as Amy’s recast mother and Star Wars icon Mark Hamill as the ceremony’s surprise officiant (sorry, Wil Wheaton!) — a number of scenes were left on the cutting-room floor. (Among the excised sequences was an episode-ending tag in which the newly-married couple receive a wedding present from the late Professor Hawking.)

Below, showrunner Steve Holland reveals which cut was the most painful to make (hint: it rhymes with hee-haw), shares the most challenging aspect of the episode, and weighs in on whether viewers will catch a glimpse of Shamy’s honeymoon in the Season 12 premiere.

TVLINE | What was the trickiest aspect of this episode to execute? Was it writing Sheldon and Amy’s vows?
The trickiest part was juggling this big cast of characters. We had so many great people coming in and we had so many little story threads [to service]. We really wanted to make sure everyone had something good to do and had a great moment. And in the middle of all of that, we wanted to make sure we didn’t lose Sheldon and Amy. Because this is their day. So trying to find that balance was the trickiest part. 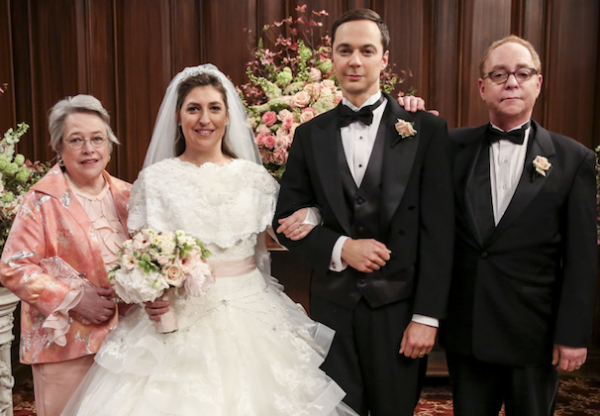 TVLINE | What was the most painful cut?
Probably the Meemaw phone call. It was a lovely moment. That was a hard one. But it was 35 seconds in a script that was [already] five or six minutes long.

TVLINE | How and when did it come up with the idea to have Mark Hamill be the officiant?
When we first started talking about the wedding, it had come up that maybe one of Sheldon’s friends could get him a surprise officiant. And Mark was the first name on the list, so we reached out to him to see if he’d be interested. We didn’t have a script at the time, so [he] really had to take a leap of faith and trusted that we were going to do right by him… He was the nicest human being you could ever imagine.

TVLINE | Will we see much of Sheldon and Amy’s honeymoon when we pick back up next season?
I don’t know. We have some overall conceptual thoughts about next season, but we haven’t nailed down any of the specifics. But it’s certainly possible. It’s something we have talked about as an option.

What did you think of the episode? Vote in the poll below and then elaborate in the comments. Oh, and scroll through the gallery above — or click here for direct access — to check out our 10 favorite moments from TV’s wedding of the year.