The Big Bang Theory wedding eight years in the making is now just six days away. But before Sheldon and Amy make that fateful trip down the aisle next Thursday (8/7c, CBS), we turn your attention to the following mini Q&A with showrunner Steve Holland, which features answers to many of your burning questions about the long-awaited nuptials — beginning with that heavily scrutinized guest list. 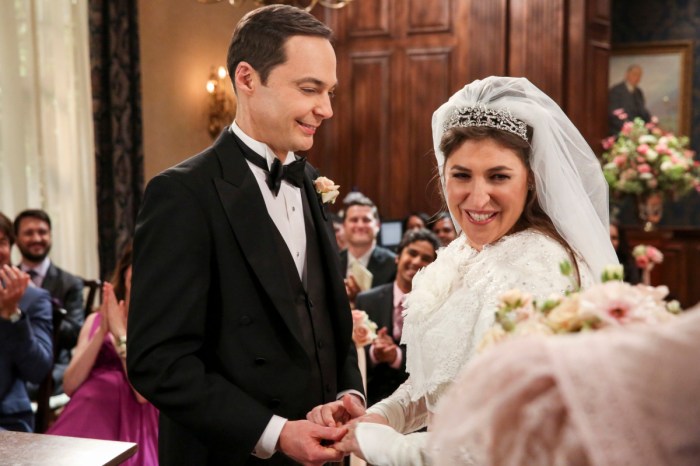 TVLINE | Why did you recast Amy’s mother with Kathy Bates?
When we met Amy’s mother in Season 4 [as played by actress Annie O’Donnell], it was before Amy had become such a big part of the show. It was a one-off [scene] on Skype. [Annie] did a wonderful job. But when we had the chance to bring [the character] back in a role that could possibly recur [we decided to make a change]. And [series co-creator Chuck Lorre] had a relationship with Kathy Bates after they worked together [on Netflix’s Disjointed] and, well, how do you say no to bringing Kathy Bates on? [Laughs]

TVLINE| So we may see her and Teller [aka her dad] again?
Now that he’s married, Sheldon’s in-laws are definitely going to be a part of his story moving forward.

TVLINE | Meemaw was conspicuously missing from the guest list. How come?
We had a voice message from Meemaw and we ended up not being able to include it because [the finale was running so long]… Our explanation to ourselves was that Meemaw is in her 90s and too old to travel. She had a nice voicemail message that we had written for her and that we recorded and we just didn’t have time to get to it.

TVLINE | Was it recorded by June Squibb or Annie Potts?
It was Annie. June [who played the character in Season 9] was terrific [in the role], but with Young Sheldon being on and Annie Potts [aka Younger Meemaw] being such a big part of that show it just felt like a different character.

TVLINE | Fans were also bummed not to see Leonard’s mom Beverly on the guest list.
We would’ve loved to have Christine Baranski back. But she was shooting The Good Fight [in New York].

TVLINE | You luckily were able to get Laurie Metcalf to return.
We knew we needed Laurie. We contacted her a month before we even had a script and said, “This finale is going to be a wedding. We need you to be part of it.” So even though she was in New York doing [the play Three Tall Women], she flew in on Sunday and she was with us on Monday — her one day off. I don’t know how we could’ve done the wedding without her.

TVLINE | You have Jerry O’Connell and Wil Wheaton in the same episode. Fans are wondering if there will be any Stand By Me winks.
We don’t tend to do any of the fourth-wall-breaking winks. But it was neat, just for us, to have them together.