Earn and the Atlanta crew got ready to leave on a jet plane in the Season 2 finale… but not everyone made the trip.

Al has booked a European tour opening for Clark County — and hasn’t officially canned his cousin yet — so Earn scrambles to get everything settled before they leave. He and Al meet with a black entertainment lawyer (he represents four clients on Love & Hip Hop: Atlanta!), but Al sniffs that he’d prefer a “high-level Jewish dude.” Al is moving, too, and Earn hires three dudes to pack up all his stuff — one of whom is clearly drinking beer out of a paper bag. Darius is just realizing his passport is expired. Oh, and while he’s packing, Earn remembers he still has that ridiculous golden gun in his bag that Uncle Willie gave him in the premiere. 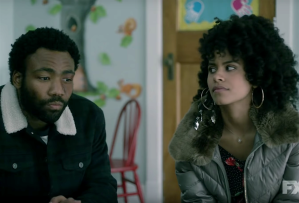 He has his daughter Lottie with him, too, and he and Van go to her preschool to meet with her teacher. They’re worried she’s in trouble, but the teacher instead tells them that Lottie is “very gifted.” In fact, she recommends they put her in the pre-K program at a nearby private school: “It has a reasonable tuition.” Can’t she just stay here, Earn asks? No way, the teacher frankly replies: “This school is awful… if I see a steer smart enough to get out of the pen, I leave the gate open.” (Yes, Van notes, she just compared her school to a slaughterhouse.) Earn reassures Van, “We’ll make it work,” and the two seem to reach a truce — if not a reconciliation — before he leaves for two months.

When Earn gets back to Al’s, he has to bribe the movers to skip their lunch break, and Darius still hasn’t renewed his passport. He knows a place, though, and Earn accompanies him to a quickie passport renewal spot filled with old Jewish guys. The guy at the counter, also Jewish, is used to serving rappers and their entourages there: “Rappers are procrastinators,” he says. His cousin is a great entertainment lawyer, if they need one, and the place goes silent when Earn asks: “Do you think there’s a black lawyer who’s as good as your cousin?” The Jewish guy diplomatically says there definitely is, but “black people just don’t have the connections that my cousin has… for systemic reasons.” (This is America!) He also charges them $350 for the renewal. That’s what you get for procrastinating. 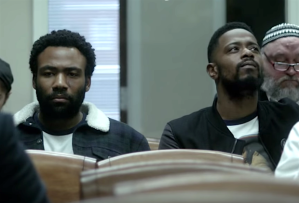 Earn is still worried that Al’s going to fire him, confessing to Darius: “I know you’re always at peace with everything, but my whole world is falling apart.” Darius says Al will always take care of him, but Earn doesn’t want a handout. Darius does admit that Earn is still learning on the job: “Learning requires failure… Y’all both black, so y’all both can’t afford to fail.” But if Al was going to fire him, he’d wait until after the tour, he thinks, to “give you a chance to see the world.” When they get back, Earn tries to talk to Al, but he wants to wait until they land. Uh-oh.

They head to the airport, meeting up with Clark and his manager Lucas, and it looks like Earn actually got everything done in time. (They even blow past guys pushing credit cards with free miles, like Earn was doing when Season 1 began, proving how far he’s come.) But Earn forgot one thing: In the security line, he realizes he still has that golden gun in his bag. Dammit. His face falls; he’s crushed. He still walks through security, though, and doesn’t stop when the TSA guard yells asking whose bag this is. On the plane, Al tells him: “I saw what you did at TSA.” He reassures Earn that he’s not firing him: “You the only one that knows what I’m about. You give a f—k. I need that.” Earn acknowledges this with a small nod, but he’s shocked when he sees Clark County boarding the plane. Clark says Lucas got taken away by the cops; they found a gun in his bag. But “the piece was in Clark’s bag,” Earn whispers to Al. Man, that Clark County sure knows how to survive, huh? (Yoo-hoo!)

And of course, in a fitting epilogue, Tracy knocks on the front door of Al’s empty house, with a lady on his arm and Chinese food in his hand, wondering where everybody went. Sorry, Tracy. Maybe next tour.

But what did you think? Grade the Atlanta finale in our poll below, then hit the comments to share your post-Season 2 thoughts.