FX’s Emmy-winning comedy Atlanta is back for Season 2… and is it possible that it’s even better than last season?

Thursday’s premiere opens in disorienting fashion, with a five-minute vignette centered on two young black men we’ve never met. They hang out playing Xbox and guzzling Gatorade when one casually mentions that if you order a #17 at a nearby fast-food chicken joint, they’ll sell you an eighth of weed. So they head over there to hit the drive-thru, but when they pull up, they put on masks and pull out guns to rob the place. When one of them rushes inside to grab the restaurant’s stash of weed, the manager starts firing at him with an automatic rifle. They exchange gunfire, and when the robber runs out and piles into a car, the manager riddles the car with bullets. Before the car peels away, an innocent woman gets out of the back seat, crying and bleeding from the head.

It’s a startling way to open the season — chaotic, vivid and heart-pounding — and the premiere never circles around to explicitly connect it with Earn and the other characters. But it fits with Season 2’s subtitle: “Robbin’ Season,” which Darius later explains is the local term for the crime-ridden days leading up to the holiday season. (“Christmas approaches, and everybody gotta eat.”) It sets up a darker, deeper season that’s confident in the stories it wants to tell… which includes the bleakly comic and touching Earn storyline that occupies the rest of the premiere. 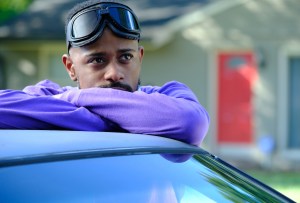 Earn is still sleeping in his storage unit, and he’s rudely awakened by an employee just brazenly taking his stuff. (“Yeah, I watch Storage Wars, too,” the guy grunts. “This ain’t that.”) Earn ends up at Al and Darius’ place and discovers a frosty vibe between the two friends; Earn doesn’t help matters by calling Al’s lady friend the wrong name. Darius agrees to give Earn a ride to meet his parole officer, and he won’t talk about his rift with Al, but he does want to talk about “Florida Man,” who Darius is convinced is a supernatural being committing all the crimes attributed to “Florida man” in headlines. Oh, and he’s really into loud, propulsive speed metal right now, apparently. We’ve missed you, Darius, you delightful weirdo.

After a depressing meeting with his parole officer — he has to pay hundreds of dollars he doesn’t have for mandatory anti-drug classes, and can’t get arrested again — Earn gets a call from Al. Their Uncle Willie is holding his girlfriend Yvonne captive, and Earn needs to go straighten it out. So he and Darius pull up at Willie’s run-down ranch house (Darius: “The vibes here are just so intense”), and they can hear arguing inside as they walk up. Willie — hi, Katt Williams! — answers the door in his bathrobe, and admits to locking Yvonne in the bedroom because he thinks she stole 50 dollars from his wallet. But he warns Earn not to go in the bathroom: There’s an alligator in there. 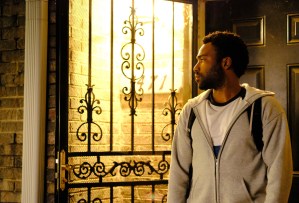 While Earn talks to Yvonne and gives her some cash to pay Willie back, the cops show up, and a defiant Willie refuses to step outside, even threatening to sic his gator on them. (The neighbor kids back him up, calling him the “alligator man.”) Earn steps in and offers to defuse the situation, reminding Willie that he cannot get arrested right now. But when Yvonne gives Willie his fifty bucks back, he calls her “a lying-ass bitch,” and she walks out yelling to the cops that he kidnapped her. Yeah, that’s not defusing the situation, Willie. He and Earn go at each other: Willie jabs Earn for being homeless and dependent on Al, and Earn fires back that he’s scared of turning into Willie — “someone everybody knew was smart, but ended up being a know-it-all f–k-up jay that just let s–t happen to him.”

It looks like things might get really bad when Willie pulls out a gold-plated pistol… but he’s just giving it to Earn to hold. He gives him a bit of sage advice, too: “Get rid of the chip-on-your-shoulder s—t. It’s not worth the time.” As Earn emerges from the house, the cops move in… and Willie sets his alligator loose on them. He wasn’t bluffing! But the majestic beast only takes a few steps towards them before lying down lazily in the bushes. And it’s all just a distraction, so a bathrobe-clad Willie can sprint out the back door and evade the cops — for now, anyway.

Back at Al’s, he and Darius make up by sharing a joint, and by laughing at Earn’s gold-plated pistol. They’re joined by Tracy, a friend of Al’s who is fresh out of jail and crashing on the couch — taking Earn’s spot, basically. But it’s cool: Earn shrugs it off, and assures Darius he’s OK before heading out into the night. Alone. To God knows where.

But what did you think? Grade the Atlanta premiere in our poll below, then hit the comments to share your post-premiere thoughts.