It was only a matter of time before Big Bad Daddy Riggs went a step too far in messing with his son’s life. In Tuesday’s Season 2 finale of Lethal Weapon, that step happened when Nathan Riggs decided to kidnap Trish Murtaugh.

But who would’ve guessed that Riggs’ biggest drama this season would’ve come not from his criminal father but from portrayer Clayne Crawford’s off-screen behavior?

While I’m sure you’re all very worried about Trish’s outcome — and we’ll get to that in a moment — there’s likely a larger question on your minds: Given that we learned earlier Tuesday that Crawford had been fired from the Fox dramedy, did the finale hint at any behind-the-scenes trouble?

Short answer? No. The episode was filmed before the accusations against Crawford, and his response, went public. Also, if the bubble series is renewed for Season 3, producers reportedly are looking to recast the role of Riggs — meaning that, aside from a new face sporting some questionably shaggy facial hair, there wouldn’t be much change for the character.

That said, the hour did end on a cliffhanger, with Riggs bleeding out at Miranda’s grave after being shot point-blank, so…

Let’s back up a little. When the newly anointed Captain Murtaugh went to Riggs’ place to let him in on the big promtion news, he found himself — and his partner — hitting the ground when someone opened fire on the trailer.

Naturally, everyone assumed that Riggs was the subject of the hit. But (twist!) Murtaugh was actually in the would-be assassin’s crosshairs — and not Roger, but Trish. Mrs. Murtaugh ran into danger when she realized that her co-worker, Alan, was a money launderer who was in league with Nathan. Unfortunately, she realized that a second before Riggs Sr. nabbed her and demanded that she transfer $2 million to his account. 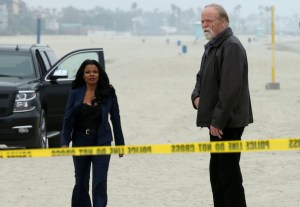 Martin realized that the only way to get through to his pop would be to endanger someone he loves, so he picked up his half brother Garrett from prison and gave Nathan a call. They all met up at Riggs’ camper, where Nathan agreed to a trade… and threatened to get at Riggs’ girlfriend Molly and her son if the cop didn’t let them go.

The whole thing ended with a Riggs-on-Riggs beat-down on the beach. Nathan was choking the life out of his older son when Murtaugh returned from getting Trish to safety just in time to save his partner. Then, with the help of a convenient grenade, Murtaugh got rid of Nathan’s thugs — blowing up Riggs’ trailer in the process — while Riggs gave his father a (near- ?) fatal head wound. Oh, and somewhere along the way, Nathan stabbed his son in the ribs.

With that settled, Riggs planned to move back to Texas with Molly and her son. So he bid Dr. Cahill goodbye, then headed to the Murtaugh home, where the family and Riggs’ co-workers threw him a surprise going-away party. When he left, he thanked Murtaugh for saving his life. Then, after calling Molly and saying he had one more stop to make, Riggs stopped at Miranda’s grave and told her she’d always be with him, but he was moving on.

AND THEN GARRETT SHOWED UP AND SHOT HIM IN THE CHEST.

Now it’s your turn. Grade the season — and possibly series? — finale via the poll below, then hit the comments with your thoughts.