Coming of age is tough enough. Coming of age while simultaneously trying to balance multiple hot plates on your arm? That takes talent.

“The three-plate carry was the hardest thing for me,” says star Ella Purnell (Miss Peregrine’s Home for Peculiar Children), who plays protagonist Tess in Starz’s series adaptation of Stephanie Danler’s 2016 novel Sweetbitter. The story follows 20-something Tess as she moves from Ohio to New York City in the early 2000s; once in town, she near-accidentally lands a tryout to be a back waiter/busboy at a posh Manhattan eatery named 22W and then must prove to the staff that she deserves the job. 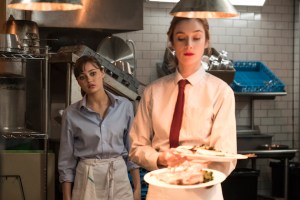 Hence the dish-juggling, which Purnell and her castmates — including Master of Sex alum Caitlin FitzGerald — reviewed during an intense orientation the show held right before filming began. (Further evidence the series is all-in: The highly realistic 22W set spans several levels and contains an operational kitchen that actually cranked out many of the meals you’ll see on screen; the extras playing kitchen workers were sent to the Culinary Institute to learn proper food prep.)

That attention to detail is a direct result of Danler’s involvement in the adaptation of her first book. “I feel such a loyalty to the restaurant industry. It’s the only job I’ve ever had,” she says, referring to her tenure at New York City’s Union Square Café, from which she drew heavily when crafting Tess’ story. “As much as I wrote the book for anyone to read it, I wrote it as a tribute to this industry. It was really important to me to get it right in its highs and lows, beauty and ugliness. So we refused to cut corners.” She laughs, shooting a glance at Stuart Zicherman (The Americans), with whom she executive-produces the series. “Stu was all about television logic and emotional logic, and I was about restaurant logic.”

Sweetbitter‘s six-episode first season unfolds over Tess’ first few wide-eyed weeks at 22W, as she slowly befriends the cliquey waitstaff and soaks up everything — both sublime and squalid — that comes along from living in the Big Apple. She’s dazzled by FitzGerald’s Simone, a longtime server at the restaurant whose icy demeanor and thorough knowledge of wine comes off as sophisticated to the young transplant. 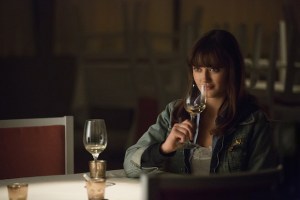 “I don’t think Tess has ever met anybody like her in her entire life, and she resembles everything that Tess dreams of when she dreams of New York,” Purnell tells TVLine. “She knows everything about food and wine, and she just owns the restaurant. She’s such an authoritative figure, and she’s just so classy. She’s so self-possessed.”

Meanwhile, Simone maintains her own interest in the newbie, but possibly for less glowing reasons. (As one character warns Tess at the start of the season, “Simone’s a lot of things. She’s not your friend.”)

“Simone is enigmatic,” FitzGerald says, adding that her character’s interest in Purnell’s might be that she sees her as a threat or that Tess “reminds her of who she used to be, and the nostalgia she has for that person, that girl she once was, maybe brings something up in her that she wasn’t prepared for.”

She adds: “But I also think she feels enormously protective of Tess and wants to shape her, wants Tess to be an audience to her.”

Tess’ interactions with Simone are complicated by the younger woman’s instant crush on bartender Jake (The Hollow Crown‘s Tom Sturridge), with whom Simone has a mysterious connection. And though the series’ sultry trailer plays up the connection between developing one’s sense of taste and awakening other areas of the body, Zicherman maintains that the half-hour drama is “not about sex. It’s about developing a palate, it’s about developing an identity. There are so many components to that.” 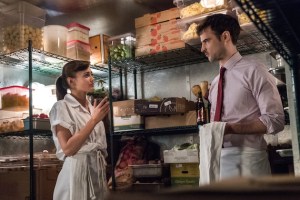 So it follows, he continues, that the freshman season — which premieres Sunday at 8/7c — will slow down the book’s action a bit in order to let Tess’ experiences breathe like a freshly uncorked pinot noir.

“When it came down to six episodes, you know what? Let’s just tackle the first two weeks. Let’s tackle her getting the job. Let’s tackle her discovering how much she wants something,” he adds, “and then at the end of the season, be careful what you wish for.”