Mum was the word in Thursday’s Grey’s Anatomy. Not only did Alex and Jo drive all the way to Iowa to check on his mother, but back in Seattle, Meredith’s mini-livers presentation dropped in her lap an opportunity to try to make right the wrong done to Marie by Ellis, thanks to that lecherous Harper Avery. So was Mama Karev (guest star Lindsay Wagner) OK? Were Mer and Marie able to bury the scalpel? Read on…

‘DON’T ASSUME THE WORST’ | As the Jesse Williams-directed “Fight for Your Mind” began, Meredith was prepping for her presentation; Alex and Jo were on the road; Amelia was caring for Betty as she went through the worst of her detoxing; Bailey was getting ready for a meeting with Vik’s lawyer brother; Arizona reported to Owen and April that Sofia had been suspended from second grade for stealing the field trip money; and Maggie thought she had a case that could take DeLuca’s mind off of his heartache. As Alex and Jo pulled up in front of his mom Helen’s house in Iowa, fear was written all over his face — fear that only grew when there was no answer at the front door. After talking to a neighbor, Alex reported to his fiancée that his mom was… at work. Hey, that wasn’t so bad! At the library where Helen punched the clock, Alex expressed to her his surprise that she’d gotten her old job back. “I missed you so much,” she said, embracing him. Shortly, Helen explained that the volume on her mental illness had been turned down somehow. And it helped if she kept to a routine. “You’re fine now,” said Alex, “and you didn’t tell me?” She had so much to manage, she replied. And instead of let herself become upset, she asked her son to leave — after he’d come all that way! 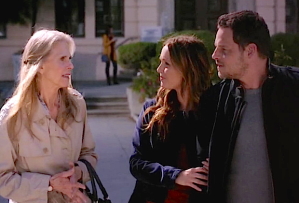 Rather than head right back to Seattle, Jo got Alex to hang out and hit baseballs for awhile. It let him blow off some steam. Not quite enough, though. He remained furious that his mom was fine now, when nobody needed her anymore. He’d always had to clean up her messes, and now he couldn’t say s—, lest he be the cause of one. (Some exceptionally fine work from Justin Chambers in that scene, no?) Afterwards, he marveled that all he’d ever wanted was a mom who wasn’t sick, and now he had one — but she didn’t want him there. Off his conversation with Jo, Alex returned to the library just to tell Helen that he was happy for and proud of her. “I know that I haven’t stayed in touch,” he added, “but I always thought about you.” In response, she let him change the due date stamp like he used to do for her when he was a kid. At the end of the episode, Alex introduced his mom to Jo, and she invited Helen to the wedding. To his credit, Alex was understanding when his mom said that travel was tough with her condition. “My sweetest boy,” she sighed before getting on her bus. “My truest love.” (Sniffle.) 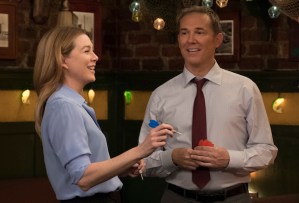 ‘I’M WAY OVER MY SUNSHINE QUOTA’ | As Meredith was being pelted with pre-presentation questions from reporters, in walked Marie. Rather than speak with her, Grey beat a hasty retreat — all the way to the bar, where her order of coffee attracted the attention of a handsomish guy in a suit (Say Anything co-star Loren Dean). Turned out, he was in Seattle from L.A. for her presentation. Mind you, Mer didn’t reveal to him her identity. (Wouldn’t he have seen her on the cover of that medical journal? Or in the news when she won the Harper Avery?) When at last he found out who she was, he said that she was so charming that it made it harder for him to hate her for wasting a year of his life. What the what? Apparently, he’d been working on the kind of cutting-edge surgery that Mer beat him to the punch on with her groundbreaking stomach fix on Megan. So it wasn’t really hatred, more like aggravated admiration on his part. And he was clearly smitten, even flirting (badly), asking if she had any pets. As the day wore on, Mer admitted to her “date” that she felt for Marie — she’d been wronged, terribly. Yet Grey couldn’t bring herself to face her. Ellis had stolen Marie’s dream, totally screwed her friend, so Cerone thought it was OK to turn around and dick over Mer. Ultimately, Ellis’ daughter made a statement before her presentation, revealing that the Grey Method was really the Grey-Cerone Method. Afterward, Marie wanted to talk, but Mer replied curtly that they’d said all that needed to be said. 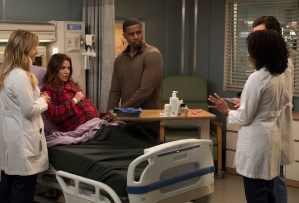 ‘SHE EQUATES SURGERY WITH DEATH’ | To cheer up DeLuca, Maggie involved him in her and Arizona’s case involving a woman, Theresa, who was so deathly afraid of surgery that she couldn’t even allow Robbins to perform a barely invasive procedure to correct her unborn baby’s spina bifida. (And how soaptastic was the couple — Dallas alum Julie Gonzalo and Gavin Houston from The Haves and the Have Nots!) As Theresa tried to flee, Arizona attempted to remind her that without this procedure, her baby could be born paralyzed. Still, the mom-to-be wouldn’t change her mind. Later, Arizona told April that she’d read in Sofia’s diary that the kid had stolen the money to buy a plane ticket to New York. “I can’t keep her against her will,” Robbins said, “can I?” At least their conversation gave her an idea of how to approach Theresa, whose home she next showed up at. Finally, Arizona convinced the young woman to go through with the procedure by sharing the story of her amputation and how relieved she was that Callie hadn’t obeyed her order not to let her leg be taken. “I’ll die,” Theresa replied. But no, her dad had died way back when (thus giving rise to her fear). She wasn’t her dad, and what happened to him wouldn’t necessarily happen to her. Thankfully, the procedure went just fine. That night, Arizona had a fight with Carina, who wished what was best for Sofia wasn’t what was worst for her. The couple kissed, and it appeared that that was that. In the hour’s final seconds, Arizona phoned Callie and said that she thought Sofia should move back to New York — “and I think I need to move back with her.” 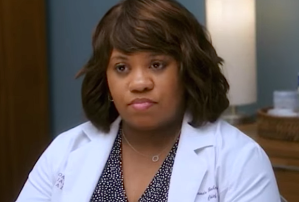 ‘ALL THE BOY WANTS IS AN APOLOGY’ | In a meeting with Bailey and Richard, Sanjay explained that Vik would be happy to scrub back in at Grey Sloan — assuming he received a formal apology for his firing. Rather than jump at the offer, Bailey hit the roof. To calm her down, Richard reminded her that in the past he’d knowingly operated at Grey Sloan under the influence. Later, Miranda questioned Levi about, in essence, whether it had been right to fire Vik. He said absolutely… but also inadvertently reminded her that she’d opened up a patient while high as a kite. In other words, welcome back, Vik! However, Miranda choked on her apology and instead told him how lucky he was to learn from doctors like her and Richard. “I have made mistakes,” she said, “but firing you was not one of them.” Still, she welcomed him back for a one-year probation. If he didn’t screw it up, she’d shape him into an amazing surgeon. “I accept your apology,” he replied. 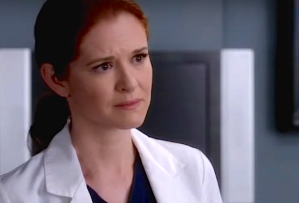 ‘THE NIGHTMARES’LL STOP’ | At Owen’s, Amelia commiserated with Betty. But she was in too much pain to appreciate it. “Your life must be pretty pathetic,” the teen spat, “if you can just sit here all this time watching me puke.” Later, when Betty got quiet in the bathroom — and didn’t jump at the chance to “mean-girl” Amelia — the doc got worried. Rightly so, it turned out. Betty had flown the coop. Next, Amelia went to a meeting at which she confessed that she felt partly responsible that doctors like her who didn’t know any better had helped facilitate the epidemic of addicts with their prescriptions. Finally, near the episode’s conclusion, Jackson revealed to April that he’d paid off all the Harper Avery settlements himself. “You are on a really good path,” his ex-wife told him. Based on next week’s scenes — in which it appeared that April had been in some kind of accident that left her fighting for her life — could those end up being her last words ever to Harriet’s dad?

So, what did you think of “Fight for Your Mind”? Hit PLAY on the promo for next week’s episode, which teases a cast member’s (gulp) exit, then drop a comment with your thoughts below.