Archie was torn between two father figures as Riverdale‘s mayoral race heated up — while Betty started having grave doubts about her own dad.

Archie goes door-to-door campaigning for Fred, but really, he’s just looking into everyone’s eyes to see if they’re the Black Hood. Hiram advises him to reform his Dark Circle vigilante squad to give him some muscle, but really, Hiram just wants them to stir up trouble so Riverdale will look lawless, making Hermione’s tough-on-crime campaign more appealing. Meanwhile, Betty eyes her dad Hal suspiciously across the breakfast table, worrying that he might actually be the Black Hood. She confesses her fears to Cheryl — because of course, Cheryl already knows what it’s like to have a killer for a dad. 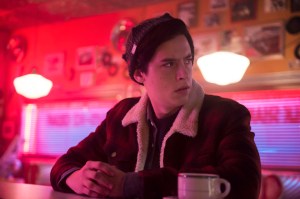 After Archie reforms the Dark Circle, Moose confesses that he had a fight with Midge right before she died when he found out she was fooling around with a Serpent. That sets off Reggie, who interrupts Jughead’s Serpent meeting and starts shoving people around, reigniting the Northside vs. Southside feud. Later, Fangs confesses to Jughead he was hooking up with Midge (remember that “going over lines” moment Jughead caught on camera?), and he was too scared to tell the cops. And he should have been: There’s a new sheriff in town — Hiram’s old pal Sheriff Minetta — and when Jughead’s footage of Midge and Fangs together gets leaked, the sheriff hauls Fangs away in handcuffs. Reggie and his goons get revenge by slashing tires at the Serpents’ biker bar… and Archie finds out Hiram is actually paying them to cause chaos.

Betty, looking to prove that Hal is the Black Hood, breaks into his desk and sees that his day planner indicates he was always “busy at work” or “on a business trip” every time the Black Hood struck. (The coroner calls her down to the morgue to identify a body, and even though it’s not Chic’s, Betty still feels guilty for serving him up to the Black Hood.) Then when she finds Hal is still paying rent on the bachelor pad he crashed in after Alice kicked him out, she and Cheryl break into there (man, Betty is good at picking locks, isn’t she?) and find… that old Nancy Drew code book the Black Hood used to make his encoded messages. Hal claims it was meant to be a birthday present for her, but Betty doesn’t buy it. That’s it, call off the search: Hal has to be the Black Hood, right? 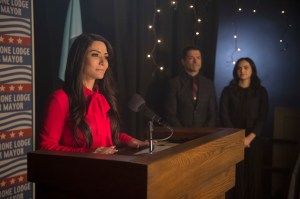 Well, maybe not. Because on debate night, just as Hermione calls the Dark Circle a “dangerous radical group” and accuses Archie of running it, a shadowy figure appears in the balcony. It’s the Black Hood! He takes aim with a sniper rifle, firing at the stage as everyone in the crowd ducks for cover. (Including Hal… so it can’t be him.) No one is hit, but Hermione is badly shaken up, and the Black Hood somehow escapes into the night. Fangs was in a prison cell when all this happened, so clearly, he didn’t kill Midge. The cops agree to let him go — but there’s still an angry mob of protestors outside, thirsty for blood. And they’ll get it.

As Jughead and the Serpents form a human shield to protect Fangs as he walks out of prison, Reggie marches up to them, gun in hand. Archie tackles him to the ground, knocking the gun loose, but as they struggle, the gun goes off… and Fangs ends up with a bullet in his gut. And Betty, still not convinced her dad isn’t the Black Hood, calls Hal and tells him to meet her “where this all started,” at the town hall where she made her speech. But he doesn’t show up — and when Cheryl answers a knock at the front door of Thistle House, the Black Hood is standing there waiting for her. For the love of all that is holy, Riverdale writers, do not take Cheryl “Bombshell” Blossom away from us.

* Veronica tried to play Miss Mob Boss this week, partnering up with a handsome young devil named Elio to finance a new casino in Riverdale. (Was Elio a redhead, too? I couldn’t tell in the neon lighting at Pop’s.) But when Hiram said no — and stashed her ransom money from the St. Clairs in a trust so she couldn’t touch it — Ronnie ditched her dad and threw her support behind Fred for mayor. Hiram will probably just calmly accept this betrayal with a shrug, right?

* This new sheriff is definitely under Hiram’s thumb, right? Guess we’ll see how he uses Minetta to make sure Hermione ends up in the mayor’s office.

* Anyone else notice the weird look that Midge’s mom gave to Jughead in the protest crowd outside the prison? I sure did. What was that about, hmmm?

* I thought nothing would be funnier than the name Poppa Poutine, but now Elio has revealed that the late Mr. Poutine has a son known as… Small Fry.

* After last week, I officially have a new theory about who the Black Hood is. I will let you know by season’s end if I’m right. (I am probably not!)