After all the kidnappings in this week’s (particularly bananas) episode of Riverdale, the town’s general store might want to order a fresh supply of duct tape. 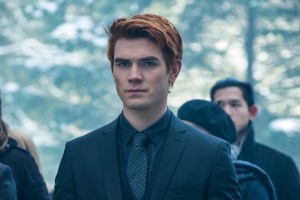 At Midge’s funeral — where Cheryl sings a mournful ballad, natch — the whole town is in shock… and Archie is back in what Veronica calls “Death Wish Archie” mode. He’s convinced that the Black Hood’s return means that he and his dad Fred are in danger, and sure enough, as he’s peeking inside a boarded-up house, he spots a hooded figure lurking behind him. He confronts the masked man, who’s quickly joined by two friends who pummel Archie into unconsciousness. But it’s not the Black Hood: It’s our old friend Nick St. Clair!

Nick takes Archie hostage (Kidnapping #1), calling Veronica and demanding a $1 million ransom for his safe return. (He’s still nursing a grudge against Archie, and wants to prove himself to his mobbed-up father.) When Hiram refuses to step in and help — “We risk exposing ourselves,” he tells his mija — Veronica takes matters into her own hands. She steals cash from the family safe, but it’s not enough, so she agrees to meet Nick for “a night together” (ick) to cover the difference. And because Nick is a total psycho, he sets up a webcam so a tied-up Archie can watch on a laptop while Nick and Ronnie get it on.

Veronica gets dolled up to meet Nick, and he greets her in his hotel suite with Champagne and caviar. But she pulls a trick out of his own playbook: She drops a roofie into his Champagne glass, and by the time an enraged Archie escapes and busts down her hotel door, Nick is passed out on the floor. They tie him up (Kidnapping #2) and turn the tables on him, calling his dad and asking him for a $1 million ransom. And they get it, too! Hiram apologizes to Archie for not helping get him back, but Archie’s sole focus right now is to bring down “the Black Hood, once and for all.” And Hiram promises to help in any way he can — assuming he’s not actually behind this whole Black Hood thing in the first place. 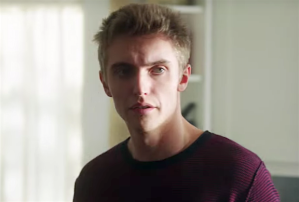 SON DAMAGE | Jughead thinks Midge’s murderer could be a copycat killer, and instantly sets his sights on Chic. He theorizes that Chic and Mr. Svenson could’ve crossed paths at the Sisters of Quiet Mercy, so he and Betty head there to look at Chic’s file. But in the file, they find a photo of… not Chic. So did Chic steal the real “Charles Smith’s” identity? They confront Chic, telling Alice that he’s an imposter, and Chic’s totally normal reaction is to pick up a knife, slashing Alice on the arm before Betty knocks him out cold. When he wakes up, Betty and Jughead have tied him up in the garage. (Kidnapping #3!)

Chic admits he’s not really Alice’s son: He met Charles at that seedy flophouse, but he says the kid died of a jingle-jangle overdose after he knocked on Alice’s door and she slammed it in his face. Alice falls into a guilt spiral, sobbing and blaming herself for her son’s death, but Betty and Jughead don’t trust Chic — as they shouldn’t! — and go to the flophouse to investigate further. A resident there tells them Charles didn’t have a drug problem, but she did hear a lot of “nasty fights” coming from his room… and she also saw Chic dispose of some bloody sheets and pillows.

And just like that, Betty’s phone rings with that annoying “Lollipop” ringtone. Yep, it’s the Black Hood, and he tells Betty they made a mistake letting Chic into their lives: “That man has murdered before.” That gives Betty an idea: As Alice brings Hal up to speed, Betty grabs Miss Grundy’s gun (!!) and takes Chic out to a snow-covered graveyard, demanding the truth about Charles. He admits it: He killed him. And then a hooded figure appears: “It’s your very own Angel of Death,” Betty tells Chic as he runs (futilely) for his life with the Black Hood chasing behind. When Betty gets back home, though, Alice tells her Hal is gone because “he went looking for you.” So the Black Hood… is actually the Black Hal? 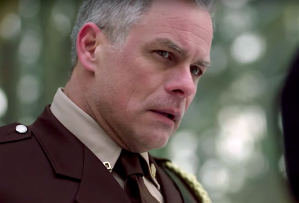 * With the Black Hood back on the prowl, Sheriff Keller faced fresh calls for his resignation, with Cheryl penning a particularly critical op-ed (at Hermione’s request). The sheriff told Kevin he’s been asked to step down by the deputy mayor, and only Fred getting elected could help save his job. He also mentioned an outsider could be brought in as Riverdale’s new sheriff. Hmmm… a Season 3 cast addition, perhaps?

* We didn’t actually see Chic die, did we? Yeah, I’m betting we’ll see that creepy smile of his again somewhere down the line. And anyone else think Charles maybe isn’t really dead, either?

* Did we ever see Cheryl and Midge interact at all before she died? Just wondering why she’s so broken up about her death. I didn’t even realize Midge was a River Vixen, to be honest.

* Yes, Alice finally confessed to the worst-kept secret in Riverdale: F.P. is the father of Chic Charles. Now when are these two crazy Serpents gonna get together already?