Take your seats, folks: It’s time to raise the curtain on Riverdale‘s musical episode. There might also be a certain hooded villain in the audience, though…

The singing kicks off right away, with the full ensemble lending their voices to the high-energy opening number “In,” from Carrie: The Musical. Kevin is directing a school production of Carrie, and his casting choices are, well, interesting: Archie and Betty are paired up as sweethearts Tommy and Sue, Veronica is playing mean-girl bully Chris, and Cheryl is playing the “iconic” lead role of Carrie White. A few of Cheryl’s castmates make it clear they don’t think she has the chops, but she proves them wrong with a soaring rendition of “Carrie,” dressed in a pink satin prom dress. She gets a round of applause… but she also gets a sand bag falling from the rafters that narrowly misses crushing her skull. 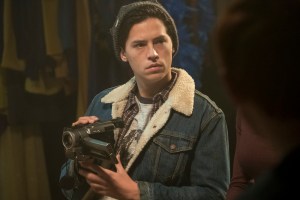 Could it be the Black Hood, part deux? Sure enough, Kevin discovers a ransom-style letter in his locker claiming to be from the thought-to-be-dead killer, demanding that Carrie be recast. But he suspects it’s just a prank from a jealous student, and tasks Jughead (who’s shooting a documentary on the making of the musical) with finding out who wrote the note. Betty volunteers to grill Ethel, who was clearly not happy she didn’t get to audition for Carrie, but denies she’d ever try to hurt anyone.

She’s not the only one unhappy about Cheryl’s casting, though: Josie is still holding a grudge over Cheryl’s creepy stalker routine, and the tension between them is evident as they rehearse a duet about friendship called “Unsuspecting Hearts.” They mend fences, though, after Cheryl apologizes, saying she was struggling with “some dark, Carrie White-like demons.” And there’s another fractured friendship in the cast: Betty and Veronica, with Betty no longer trusting a word that comes out of Veronica’s mouth. She snipes that the role of Chris is perfect for Ronnie: a “spoiled rich girl” with “major daddy issues.” But Archie asks her to ease off, and Betty eventually forgives Veronica, with the two even singing Tommy and Sue’s love duet “You Shine” together. (A landmark “Beronica” moment!) 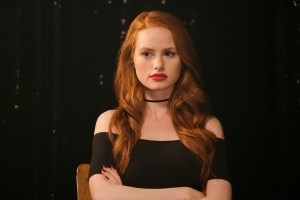 After another Black Hood note — this one vowing that “next time, the sand bag won’t miss” — Kevin is legitimately worried, and asks Cheryl to bow out for her own safety. She’s defiant (“I will not succumb to thespian terrorism!”), but her mom Penelope seals the deal when she refuses to give her parental approval for Cheryl to participate. (Because she’s evil, basically.) So Moose’s girlfriend Midge takes over the role of Carrie, while Toni comforts Cheryl: “You’re not done playing Carrie… by a long shot.” And she doesn’t know just how right she is.

While the cast gets ready for opening night, Cheryl transforms into a real-life Carrie, marching into Thistle House wearing that pink satin prom dress, drenched in blood and dramatically clutching a candelabra. She informs Penelope that “the next blood to be spilt will be yours” and demands to be emancipated, so she and Nana Rose can live in Thistle House together… without Penelope or her scheming Uncle Claudius around. And Penelope looks scared enough of her “nightmare child” that she might actually do what she says.

But the bloodshed, sadly, doesn’t end there. Back at school, Jughead discovers magazines with letters cut out in Ethel’s dressing room; she claims it was just for her vision board. Before the musical begins, Creepy Chic ducks backstage to say hi to Betty, telling her to “break a leg.” (Which sounds very ominous, coming from him.) And with the musical in full swing, a set change reveals Midge stabbed to death against a wall, with a message written behind her in blood: “I AM BACK FROM THE DEAD. ALL THOSE WHO ESCAPED ME BEFORE WILL DIE.” Yep, the Black Hood is officially back… and the town of Riverdale is back in full panic mode. 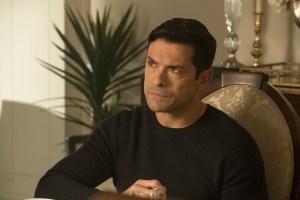 DILF FIGHT! | Hiram is getting more evil by the week: He plots to ruin Fred’s mayoral bid by exploiting the rift between him and his son Archie, gleefully revealing to Fred that he just gave Archie that vintage Pontiac Firebird as a gift. (Archie didn’t have the heart to tell Fred.) Archie comes to his senses, though, and warns Hiram not to come between him and his dad, handing him back the keys to the Firebird. He surprises Fred by buying a junky old jalopy — just like in the comics! — so the two of them can fix it up together. That’s sweet and all… but Hiram doesn’t strike me as someone who takes “no” for an answer all that easily.

* Lots of Black Hood suspects out there: Chic, obviously. Hal was in the audience, too, after patching things up with Alice. Cheryl was mad about being recast — and where did she get all that blood? We caught a glimpse of Fangs giving Midge “some last-minute notes,” and Moose didn’t seem too happy about it. Chuck reappeared from out of nowhere to “redeem” himself by taking a key role in the show. Heck, half of Riverdale was in the audience, so your guess is as good as mine.

* What’s weirder: that the school would let a student direct the musical, or that they’d bring in a student’s mother — Betty’s mom Alice — to play one of the main roles?

* The musical’s ’70s fashions and hairstyles — feathered hair! Bell-bottoms! — were a visual feast, to be sure. But they did seem ridiculously elaborate for a public school production. (Can the kids from Rise borrow some of Riverdale High’s drama club budget?) And what kind of school has the facilities to give students their own dressing rooms?