Let’s set Riverdale‘s core characters aside this week and focus our attention on Cheryl Blossom — and maybe the most beautiful image this show has given us so far.

Our dear Cheryl has been robbed of all of her trademark sass, forced by the Sisters of Quiet Mercy to wear a Puritanically modest dress and watch musty old filmstrips about the perils of gay experimentation. Plus, the nuns prescribe her “physical therapy” to break down her will, having her lug heavy bags from one side of the cellar to the other. It’s miserable, and American Horror Story-level creepy, and Cheryl’s spirit is close to being broken… but luckily, Toni won’t let that happen. She tells Veronica and Josie that Cheryl’s been silent on social media — “a sure sign of foul play,” Veronica deduces! — and they head over to Thistle House to get the real story on Cheryl’s disappearance. 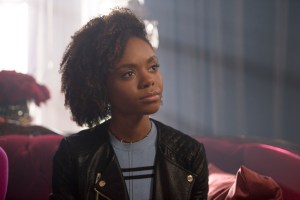 They confront Penelope, and when Josie threatens to take the case to Sheriff Keller, Penelope admits that she sent Cheryl away to deal with her “strange deviant behavior,” showing Josie the pencil drawings Cheryl did of her. This freaks Josie out to the point where she bails on the rescue, but Toni and Veronica aren’t giving up. They get a tip from Nana Rose — yeah, Nana Rose! — that Cheryl is nearby “with the Sisters,” and Kevin confirms that the Sisters of Quiet Mercy still do gay-conversion therapy. (“What the hell decade is this?” Toni wonders. Exactly.) And Kevin also knows about a secret Prohibition-era tunnel that leads right inside the convent…

So Toni and Veronica go into action-movie rescue mode — Veronica wears an ’80s-aerobicizing tight black bodysuit, natch — and sneak inside the Sisters complex, where Toni finds Cheryl sobbing during another filmstrip session. And here’s that beautiful image I mentioned: Cheryl runs into Toni’s arms, and they kiss passionately at the front of the room, as the anti-gay propaganda plays across their bodies. It’s a stunningly romantic moment that says more for LGBT equality than a thousand words could, and Toni and Veronica end up outrunning the nuns and getting Cheryl the heck out of there. Sure, their relatively easy escape is a little implausible — where’s the security? — but that image makes it all worth it. Count me in for Team Choni, all the way. 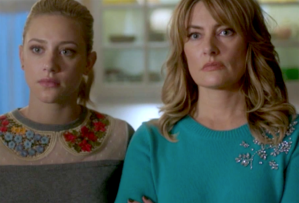 CAR TROUBLE | Betty, Chic and Alice go on high alert when the car they buried that dead body in gets dragged out of the river. F.P. tells everyone to play it cool, but Betty and Jughead can’t resist snooping and discover Dwayne the dead guy stole that car from his ex Darla — and Chic, for some reason, brings Darla home to the Cooper house with him. She’s not too broken up about Dwayne’s death, but she does want the ten grand he owed her, or she’ll have “a long talk with that handsome sheriff of yours.” Jughead and the Serpents scare her off, though, which leads to Chic finally moving out (good riddance) and Alice softening towards the Serpents… even showing up at F.P.’s door in full biker-chick makeup. This could get really weird for Betty and Jughead, couldn’t it?

* A ridiculous Archie/Hiram storyline unfortunately took up the bulk of this episode: Hiram got a threatening visit from mobsters Lenny and Carl — a Simpsons shout-out? — who demanded a healthy cut of Hiram’s profits if they allow Hermione to run for mayor. After the Lodges’ bodyguard Andre got beat up and sent to the hospital, Archie took it upon himself to protect the family, so he gathered Reggie and his football buddies to give Lenny and Carl “a message from the Dark Circle” (!), setting fire to their car and blowing it up. Hiram gave Archie a brand new car as a thank-you… but we really shouldn’t be encouraging Archie and his secret Circles, should we?

* Even in Riverdale‘s heightened reality, does it make any sense that Kevin and Moose would appear in the Sisters of Quiet Mercy’s anti-gay filmstrip?

* Riverdale‘s kids have a whole lot of bad ideas, but Betty getting a Serpent tattoo to prove her loyalty has to be one of the worst. There’s a reason you should be 18 before getting inked: It’s. Forever.

* Oh my God, did we actually witness a scene of Toni and Veronica… in class? (When Toni got the call from Nana Rose.) It was only a few seconds, but still. Couldn’t believe my eyes.

* Ha, of course Veronica knows the name of the only all-girls boarding school in Switzerland off the top of her head.

* Scheduling note: This is the last new Riverdale for three weeks, with the much-anticipated musical episode airing April 18. Can’t wait to see Cheryl burn that place down!