Politics and friendships do not mix on Riverdale this week — resulting in a serious rift between two of the show’s dynamic duos.

Hermione, fresh off announcing her run for mayor, is out there selling Hiram’s Southside prison plan — and winning the endorsement of Bravo’s own Andy Cohen! — but Fred isn’t a fan, and now wants to sever all business ties with the Lodges. Jughead is fuming about his former school being converted into a jailhouse, and goes on a hunger strike to protest. And Ethel, whose family lost everything thanks to the Lodges, dumps a milkshake on Veronica’s head for her family’s “crimes against Riverdale.” (But they still have Andy Cohen’s vote, right?) 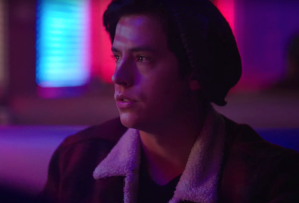 Jughead steps up his protest game after Hiram announces that Southside High will be demolished by week’s end, chaining himself to the school along with his fellow Serpents. Archie tries to talk him out of it, which puts the two lifelong friends on opposite sides, with Jughead chiding Archie for taking Hiram’s side over his own dad’s. (Ooh, burn.) Meanwhile, Veronica is fed up with all the gossip circulating about her family and decides to run against Reggie for student body president. She recruits Betty to be her running mate, but a nasty flyer circulated by Ethel — with inside dirt supplied by Josie! — labels her a liar, and when Betty finds out Veronica knew about the prison plan and didn’t tell her, she quits the campaign. Uh-oh… Riverdale‘s two strongest friendships are in serious trouble, folks.

True believer Archie is still dishing out pro-Lodge propaganda when his mom Mary returns home to help Fred get out of his contract with the Lodges. She can’t believe Archie is standing up for “a crook” like Hiram, and scolds him for disrespecting his father. Hiram is ready to move Jughead and the Serpents out by force — and wants Archie and his wrestling pals to do the dirty work for him. Archie hesitates, but Hiram reminds him of his blood oath: “If you break it, there will be consequences.” So Archie reluctantly agrees… but only if Hiram will let Fred out of his contract with Lodge Industries.

When Archie and his wrestling squad show up at Southside High with bolt cutters, F.P. is ready to knock him out, but Jughead is confident that with everyone taking video of this moment, his message is getting out there anyway: “We’re not going to go away.” After Archie snaps his chains, Jughead moves onto the next phase of his plan: running for student body president, with Betty as his co-president. And he’s not the only one: Fred announces he’s throwing his hat back into the mayoral race. Attention, Lodges: Your day of reckoning is approaching. 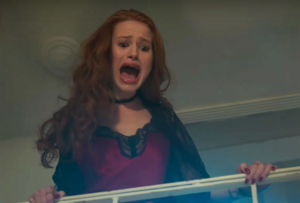 CHERYL IN PERIL | With her mom Penelope plotting her demise along with Uncle Claudius, Cheryl doesn’t feel safe in her own home. (To be fair, who would feel safe in that creaky old haunted house of hers?) So she invites the gals over for an old-fashioned slumber party: “Fancy dressing gowns are appreciated. You’ve all seen The Beguiled, right?” Really, she just wanted an excuse to invite Toni over, and we almost witness our first Choni kiss when — there’s a loud crash. The wheelchair-bound Nana Rose “mysteriously” tumbled down the stairs… and Cheryl’s starting to worry she’ll be next.

The doctors tell Cheryl they found a toxic herb in Nana Rose’s bloodstream, but Penelope chalks that up to the old lady chewing on plants in the greenhouse. Cheryl is still freaked out, and when she directly accuses Penelope of poisoning Nana Rose, Penelope sighs: “You leave us no choice… we’re going to make you all better.” She later tells a confused Toni that Cheryl was sent away to boarding school in Switzerland, but really, she’s trapped in an American Horror Story-style asylum — is it the Sisters of Quiet Mercy? — with a nun assuring her that they’ll rid her of “all those unnatural thoughts.” Conversion therapy? Yep, Riverdale just went there.

CHIC, MEET DARK BETTY | Betty’s days of sympathizing with Chic are so over: The DNA results prove he doesn’t have any Blossom blood, so he can’t be a Cooper. Except Alice explains that’s because Chic isn’t Hal’s son. (So whose son is he, then? Alice claims it’s “absolutely not” F.P., but we don’t believe that, do we?) Betty declares war on Chic, waking him up by flicking a lighter in his face and informing him, “I’m going to bring you down because I catch bad men.” Chic fires back by showing her Dark Betty wig to Alice and tattling that she uses it to have sex with Jughead. Betty offers a truce, since Alice still really loves Chic, but he warns her if she ever tries to go to the cops about the dead body, her fingerprints are all over that crime, too. Chic is clearly manipulating everyone here… but what’s his endgame? 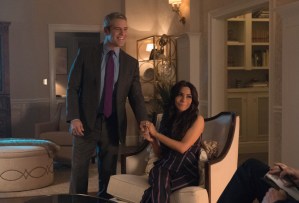 * I just have so many questions about that laughably awkward Andy Cohen cameo. Since when does Andy endorse political candidates? And did Andy agree to this cameo just hoping to be on set for a KJ Apa shirtless scene?

* F.P. mentioned that Hiram tried to buy them off with a penthouse suite in his new housing development, so they could welcome back Jughead’s mom and sis Jellybean. Does this mean we’re getting closer to meeting more of the Jones family?

* That campaign song Ronnie and Josie sang together? The Schoolhouse Rock feminist anthem “Sufferin’ Till Suffrage,” dating back to 1976 (i.e. before half the Riverdale cast was born).

* Archie, surprisingly, had the week’s funniest line when he laughed at the idea of Jughead going on a hunger strike: “I’m sorry, man. It’s just… you’re always eating.”