Family ties ran deep this week on Riverdale, as Hiram revealed his master plan — and it’s a nasty one.

Jughead is guzzling coffee and building a new murder board to chart Hiram’s insidious takeover of Riverdale’s real estate. But Hiram isn’t through scheming yet: With Mayor McCoy stepping down, Hiram pushes Archie’s dad Fred to run for mayor. (With the Lodges providing financial support, of course.) Archie senses something’s not right here — c’mon, even Archie can tell the Lodges are not on the up-and-up — so he lets it slip to Jughead that Hiram actually bought Pop’s, too. Uh-oh… the Lodgefather isn’t going to like that. 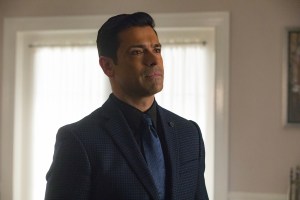 Jughead runs to Pop Tate for confirmation, but the old guy begs him not to publish that, because it would break Mom Tate’s heart that he sold the family business. Luckily, Jughead gets another fresh scoop when F.P. tells him how Hiram paid off the Serpents to trash the drive-in so he could buy the land on the cheap. And then another from the Lodges’ former butler Smithers, who tells Jughead to look into Shankshaw Prison (wait, that’s really its name? OK…), where F.P. was locked up. Principal Weatherbee won’t let Jughead publish his exposé, calling it “a malicious takedown,” but when Archie threatens to go public with a notebook full of details about Hiram’s business dealings, it’s enough to get him to ‘fess up…

He admits to Fred that his massive land grab is a precursor to — wait for it — building a private, for-profit prison where Southside High once stood. (The other land is to house the prison employees.) Fred is disgusted, and quits the mayor’s race. But Archie wants to hear Hiram out: He and Hiram later slice their palms (!) and exchange a blood oath, before Archie tosses that incriminating notebook in the fireplace. And then a new candidate for mayor emerged: Hermione Lodge! One way or another, the Lodgefather always gets what he wants. 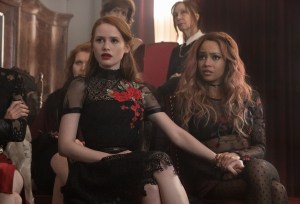 BAD WILL HUNTING | I love any excuse for more Blossom family insanity, and we get it this week with the belated reading of Cliff’s “secret will.” Of course there’s a public reading, of course Cheryl brings Toni along for moral support and of course Penelope gives her side-eye for that. The will awards Thistle House to Nana Rose (yay, she’s still alive!), the charred remains of Thorn Hill to Penelope (great, thanks), and divides the rest of Cliff’s assets in half. One half goes to everyone in town with a drop of Blossom blood — so half the town is salivating — and the other half goes to his children Jason and Cheryl. So… just Cheryl. She gets up to give a speech (because who doesn’t make a speech at a public will reading, right?), but she’s interrupted when — her dead dad Cliff walks in!

To be fair, even Riverdale isn’t that crazy: It’s not Cliff, it’s just his long-lost twin brother Claudius. (Oh, that’s all.) He was once being groomed to inherit the family fortune, but Cliff sent him into hiding with talk of a “Blossom curse”… and also by pointing a gun at him. Claudius settles right in at Thistle House, taking a room above the garage. He’s also looking to exact vengeance on the Lodges, but Penelope reminds him: “Nana, then Cheryl.” They agree that “our house must be put in order”… while Cheryl eavesdrops. Is Miss Bombshell going to have to burn another house down? 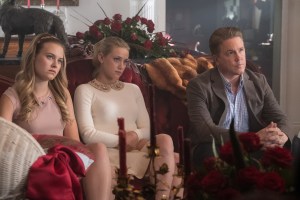 * Hey, Polly’s back! (Briefly.) She brought her twin babies around long enough to see how creepy Chic is, and then hightailed it to San Francisco. Betty’s starting to have doubts about Chic, too: First, she recruited Kevin to webcam with Chic to dig around for information, then she fished a bit of his dental floss out of the trash to test his DNA. She confronted him with the results: “You’re not who you say you are.” So who is he, exactly? And why is Alice taking his side over Polly and her newborn grandkids?

* How does one end up with “War Baby” as their gang nickname, I wonder?

* Cliff’s “Blossom Curse” was actually pretty foreboding: “One of the twins always meets a violent end… and often at the hands of the other.” And this is where I’ll note that Polly just gave birth to two Blossom twins.

* Riverdale‘s idea of what webcams are like — basically just platonic chats, maybe with somebody’s shirt off — seems ridiculously PG-rated, doesn’t it?

* Fred has to be the least intrusive dad ever. He walks in to find his teen son shirtless and sweaty with his girlfriend, tells them, “Hey guys, running for mayor!” and then walks right back out again. Have fun, kids!