This week’s Superstore confirmed the identity of Amy’s baby daddy.

The episode picked up moments after Amy reveals to Jonah that she’s pregnant. And while an overwhelming 75 percent of TVLine readers suspected that she was about to tell Jonah that he was the father, she instead confirmed that the child-to-be is in fact Adam’s. Jonah then left, unsure how to react to the news or the kiss that preceded it.

Afterwards, Amy approached Jonah and insisted they should talk. She explained that the kiss was a spur-of-the-moment decision, and she was in a weird place emotionally — but Jonah isn’t interested in discussing things any further. The next day, she attempted to talk to him again, only this time she’s interrupted by Adam, who, as we all know, received a pretty urgent voicemail from his ex. Amy suggested they talk after work, but Bo went and accidentally revealed to Adam that Amy’s pregnant. Then, as if that’s not awkward enough, Amy’s boyfriend Alex approached them, only to discover his girlfriend is carrying another man’s baby. Suffice it to say, their relatively short romance ended then and there. 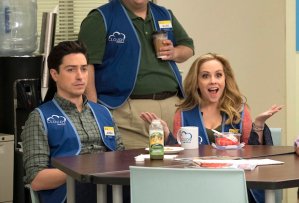 Towards the end of their shift, Jonah found Amy and apologized for reacting poorly. Amy cut him off, saying she’s had a long enough day. Jonah fired back, saying he’s sick of only getting to talk whenever she’s feeling up to it. He also admitted that he’s pissed that it took until he was with Kelly and she was pregnant for her to make a move. Amy responded, insisting that Jonah didn’t have to wait around for two years. He then regretfully quipped that she could’ve left the store as well, only everyone knows she’s never going to leave Cloud 9.

As the episode drew to a close, Jonah and Kelly exited the store and walked towards her car. Kelly stopped to tell Jonah that she loves him, and he responded by saying… he thinks they should break up.

What did you think of this week’s Superstore? Were you hopeful that Jonah was going to be revealed as the father of Amy’s baby, or did things play out exactly as you expected?