Somebody phone Maury Povich:  Superstore‘s got itself a potential baby-daddy mystery.

In Thursday’s episode, expectant mom Amy informed Dina and Cheyenne that her unplanned pregnancy was the result of a drunken one-night stand with ex-husband Adam — but we’ve got our doubts. In fact, we think the child-to-be is Jonah’s.

But when did Jonah and Amy have sex? If we had to guess, the deed was likely done immediately following Jonah and Amy’s golf “date” in the April 12 episode. (Watch the moment below.) 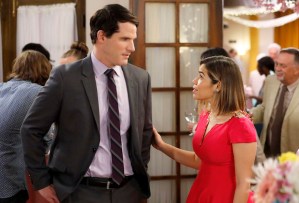 We don’t doubt that Amy slept with Adam, or that she believed (at least initially) that he was the father. (She did, after all, attempt to leave him a voicemail.) But we also think there’s a chance that, after she came down from her panic attack, she quietly considered the possibility that Jonah could be the dad. It would explain why she felt compelled to tell him she was pregnant immediately after kissing him. A previous, unseen hook-up would also help explain why things got so awkward between them during that ridiculous Italian accents bit. 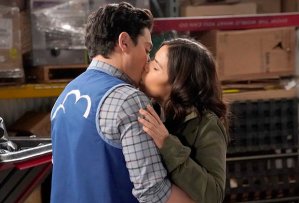 We’ll have our answer soon enough. After all, only two episodes remain this season, beginning with Thursday’s “Aftermath.” The curious synopsis reads in part, “Amy and Jonah deal with the consequences of their recent interactions.” Hmm…

We’ve speculated enough. Now it’s YOUR turn! Who put a bun in Amy’s oven? Vote in our poll, then back up your choice in the comments.