Pills don’t come much bitterer than the cure prescribed for what ailed Grey Sloan in Thursday’s Grey’s Anatomy — in other words, the Harper Avery scandal. And, as the hospital’s powers that be grappled with ways to keep it off the critical list, Alex suffered a (metaphorical) heart attack when former fling Nurse Olivia returned — with her son! — and Arizona was diagnosed with heartache over Sofia’s struggles at school. How’d it all shake out? Was anything resolved by the end of “Bad Reputation”? Read on and find out. 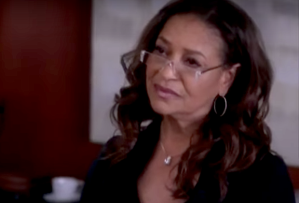 ‘WE ARE IN A CATEGORY 5 STORM HERE’ | As the episode began, DeLuca was moping at Meredith’s, having called in sick post-high; Mer packed up her Harper Avery as well as Ellis’ to return them; and reporters were camped outside the hospital to fire questions at Grey and her peers about how they felt working under the name of an alleged sexual predator. (“Surprised” would be my snippy response; no one but Catherine knew about Harper’s abuses until Jackson waived Rebecca’s agreement with his grandfather.) Inside, Bailey told Jackson she was pulling the plug on his contest — within Maggie’s earshot. Off that revelation, Maggie confronted April, who was unaware that her ex had paid the bill for the contest that he’d then entered. Off that revelation, April confronted Richard, calling him “slimy” for setting her up to look like she and Jackson were in cahoots. Off that revelation, Richard stormed Catherine’s situation room, thus tipping off to this new situation her and her crisis manager, Erin. “You entered your own contest?” Erin asked Jackson in disbelief. “Oh, God.” Unfortunately, oh, yes. Well, then, they’d just have to make sure nobody found out about it. In the meantime, she’d found through a charity organization a high-profile surgery for him to perform as a distraction for the press. “You want me to operate on a child as a PR stunt?” he asked, taking his turn to be incredulous. Pretty much — and Erin wanted him to operate with Meredith. When Jackson assumed that that was because she’d just won a Harper Avery, Catherine corrected him: Grey was a must on the case because she was giving her Harper Avery back. After giving the journalists something to write about besides the scandal, Erin explained that they’d go after the women who’d accused Harper. No way, said Catherine, Richard and Jackson practically in unison. At that point, Erin warned the “Boy Scouts and Girl Scouts,” as she called them, that somebody was going down for this. If it wasn’t Harper’s accusers, it was gonna be them! Fine, sighed Catherine. If they needed a scapegoat, it could be her. But Jackson wasn’t about to let a strong black woman take the fall for a sleazy white man. 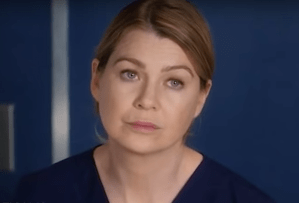 Next, Mer floated the idea to Jackson that he might actually have planned to rig his contest. And though she initially balked at being part of his PR stunt, she had a change of heart when she got a look at the patient, Diego, a Venezuelan kid with a tumor taking over his face. Mer wanted to take a risky approach, but Jackson wouldn’t hear of it — they couldn’t afford a bad outcome right now. Before they could finish their argument, the charity tried to pull Diego out of the hospital since their religious donors were having, let’s say, a strong reaction to the Harper Avery scandal. Mer solved the problem by saying that they’d do the surgery pro bono. As Grey and Jackson resumed their argument, it took a turn. Jackson admitted that he was worried about the Harper Avery Foundation and all of the jobs that would be lost, were it to fold. He tried to appeal to Mer as someone who knew a thing or two about having a difficult forebear, and she shut him right down. “You don’t get to compare your grandfather and my mother,” she railed. Ellis had had to fight every day of her life whereas “Harper Avery had everything — except decency!” Before surgery, Jackson clarified that he hadn’t been comparing Harper to Ellis, he’d been comparing Catherine to Ellis. He also copped to it being “not the smartest thing in the world” to create his own contest so that he could compete for a change. Operating on Diego, Jackson suggested they reach out to the women Harper had harassed. Mer said they’d have to tear down the foundation before building it back up — a remark that inspired Avery to go all in on the procedure so as never again to have to put the kid through such a painful surgery. Afterwards, Jackson fired Erin and presented Catherine with an alternative to the falling-on-the-sword statement she intended to release. It stated that the Harper Avery Foundation was being dissolved, and all those wronged would be welcomed back to work and retrained for employment at the Catherine Fox Foundation. 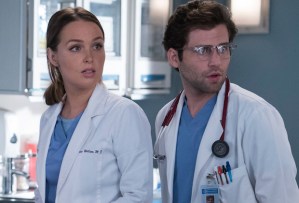 ‘IS HE STILL GIVING NURSES SYPHILIS, OR HAS HE MOVED ON TO GONORRHEA?’ | As Alex and Jo began thinking about spots to hold their wedding, Bailey chimed in that yes, absolutely, they should lock that down. Not because of their deep and abiding love, though. “This place needs morale,” she said. Since April figured she’d just lost her contest, she volunteered to plan the Jolex wedding for them. After the groom checked his bank account and became mysteriously upset, Olivia showed up in Grey Sloan’s ER with her son, who’d swallowed a chew toy. Chatting with Jo and Levi about the Harper Avery scandal, Olivia said that when she’d worked there, they wouldn’t have believed the “pig doctors” she had to put up with. And right on cue, in walked Alex. In short order, he learned that she no longer lived in Seattle and was married. When she, in turn, learned that he and Jo were engaged, Olivia wished the bride-to-be, “Best of luck with that.” The nurse then went on to tell Jo all kinds of (true) horror stories about Karev. So when Alex, Jo and Levi were treating Olivia’s son, it was… awkward. Jo admitted that she was bothered by the fact that Alex had cheated on his first wife, especially since he was suddenly acting so weird about the wedding. Hey, at least it didn’t appear that there was any real concern that Olivia’s son was also Alex’s! 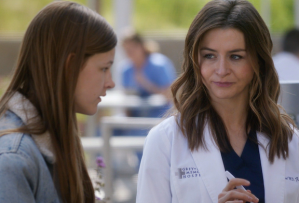 ‘HE IS SUCH A CUTE PRACTICE BABY’ | Owen was concerned that the birth mom was going to be present at Leo’s six-month checkup, prompting Amelia to remind him that he might not get to adopt the tyke. While filling out paperwork in Peds, Hunt was surprised that the very young girl sitting next to him was Betty — the birth mom. After Amelia joined them, she ushered away Betty for some food rather than make the clearly-uncomfortable kid watch her baby get a shot. And it was hard not to feel for Betty — she’d bought a dress (tag still attached) for this occasion — as if Leo would know, she noted. Alone with Betty, Amelia got her to admit that she’d gone from soccer jock to a homeless drug addict whose baby was fathered by a dealer. Off their conversation, Amelia raced to Richard and admitted that she was thinking of taking in Betty. “If you see something in this girl,” he advised, “you go ahead and drag her.” It might not work… but it also just might. Owen was for the idea, too. But he wanted Amelia and Betty to stay with him and Leo. Maybe they could give the baby back his mom. 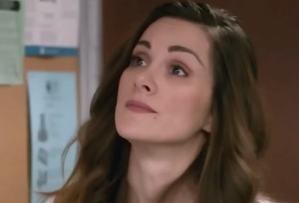 ‘MAYBE YOU CAN BRIBE ME WITH SOME SNUGGLE TIME’ | When Arizona told Carina what a tearfully tough time Sofia was having at school, DeLuca’s sister seemed to have… er, not a whole helluva lot of interest. Owen, on the other hand, asked if it would cheer Sofia up to come over and play with the baby — a normal human reaction, in Arizona’s estimation. Fired up, she ran to Carina and asked point blank if she liked kids. Sure, Carina said. She just didn’t know Sofia other than what her mom told her about her daughter. She also said that she just didn’t believe in coddling children. Her brother had been coddled, and look at him — he was in a fetal position over Sam! 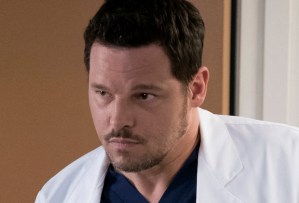 ‘I’M JUST A WEDDING PLANNER NOW’ | As the hour neared its conclusion, April assured Maggie that Jackson would have an explanation for why he entered his own contest. “He deserves the benefit of your doubt,” she said. Richard, on the other hand, had totally played her. That night, it was clear that Maggie had forgiven Jackson. She didn’t even mind if he was going broke, as long as it was for noble reasons. Betty agreed to come live with Owen, Amelia and Leo. Amelia immediately set ground rules, like that Betty had to text her family, quit drugs and attend meetings. “She’s so bossy,” Betty told Owen. But it looked like this had some potential to work. Mer asked Arizona to talk to her old roommate DeLuca for her — he hadn’t moved off the couch in a week, apparently. Arizona instead suggested someone else — Carina, who anything but coddled him. At last, Alex admitted to Jo why he was being weird: His bank account had a lot more in it than should have been there, which meant that his mom hadn’t been cashing the checks he’d been sending her for essentials like food. That meant she was dead, he said. Or wandering the streets. Maybe, he suggested, he wasn’t any less of a jerk than when he’d given Olivia syphilis. Sanjay Roy approached Bailey as she left the hospital to inform her that Grey Sloan was being sued for feeding Vik a psychotropic cookie and then firing him. But, Vik said perkily, he could start back on Monday.

So, what did you think of “Bad Reputation”? Relieved Alex didn’t have a kid with Olivia? Liking the potential dynamic of Owen and Amelia playing house? Hit the comments.