Homeland took the action overseas to Moscow this week, as Carrie was forced to pull off a tricky balancing act. (And no, that’s not a metaphor.)

Carrie and Saul arrive in Moscow with Anson and the Kabul crew, knowing that Yevgeny and Simone are holed up together in that rural Russian castle. The plan: separate Yevgeny from Simone, and then bring her back to America. But they don’t have a lot of time, with President Keane possibly being forced out of office any day now. Saul sits down at a meeting with Russian officials, and demands to know why Yevgeny’s not there. A Russian general dismisses Yevgeny as a nobody — “He sits in front of his computer screen in a basement” — but when Saul threatens to walk away, the Russians agree to bring Yevgeny to the table. 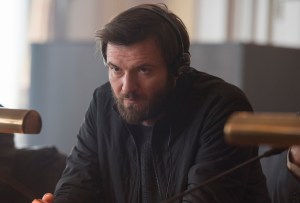 When Yevgeny arrives, Saul presents him with photos of him in the U.S. promoting fake news, but Yevgeny calls the photos fake: “Everything you think you know is fake.” They argue, and Carrie screams at him for “using me to inflict damage on my own country,” but really, it’s all a diversion to get Simone alone so Anson and his team can swoop in and grab her. The Russians seem to know that, though, and Anson’s team walks into an ambush, with armed guards killing one of them and forcing the rest to retreat without Simone. Carrie thinks they were tipped off, and Saul has even worse news: Keane is officially out, and “whatever authorization we had has vanished.”

Saul tells the team to pack up for home, but Carrie won’t give up that easily. She phones Max and Sandy to brainstorm ideas for finding Simone, and they decide to target General Yakushin, an old-school Russian who doesn’t have any love for Yevgeny. Yakushin has $300 million stashed in American bank accounts, and Carrie plans to drain those accounts and tell Yakushin he’ll get his money back if he turns over Simone. She brings this plan to Saul, and he’s skeptical at first, but Carrie assures him she’s “not all over the place” like she’s been in the past: “I’m all in, and I need you to say yes.” 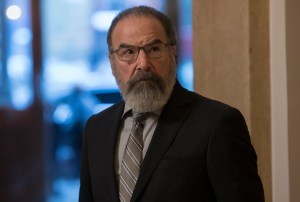 So when Yakushin angrily comes to Saul, saying “I’ve been robbed,” Saul calmly explains that he needs to produce Simone in order to become un-robbed. (He also gets in a nice jab at Russia’s malicious meddling in our affairs: “They left bodies on the ground, in America… I’m sick of your bulls–t, all of you.” Yeah, Saul! USA! USA!) Yakushin snaps, and the next thing we know, a small army of masked gunmen are loading up in SUVs and heading for a secure suite at Russian military intelligence headquarters. Yep, Yakushin knows exactly where Simone is… and he’s sending them in to get her.

As Yakushin’s men take hostages and storm the building, Carrie and Anson arrive and put on masks to blend in with the gunmen. Carrie manages to snatch a staffer’s ID and make it upstairs, close to the suite where Yevgeny has stashed Simone. But to get inside, she needs to climb out a window and edge her way along a very narrow ledge many stories in the air. (Is this Carrie Mathison, or Ethan Hunt? What is happening?) Carrie somehow makes it to the suite, but Simone gets the drop on her, pointing a gun at her and forcing Carrie to drop hers. She refuses to go with Carrie — “Yevgeny will never let me go” — until Carrie explains that Yevgeny has already betrayed and killed many people, and he’ll kill her, too: “In the big picture, you are expendable.”

So when Yevgeny gets back to the suite, he finds it empty, and looks outside to see Simone — brunette hair, red scarf — getting into a grey Mercedes and leaving. He orders the guards to follow that car. But it’s not actually Simone: It’s Carrie! She’s in a Simone wig, wearing her scarf, to distract Yevgeny while the real Simone, wearing a blonde Carrie wig, is stashed in the back of another van. Let the endgame begin. 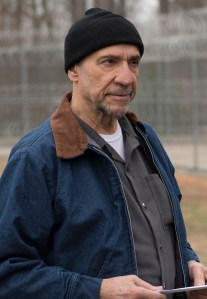 * Hey, it’s Dar Adal! The master manipulator made his Season 7 debut — albeit behind bars — to tip off Paley about Saul’s mission in Moscow. He doesn’t seem so intimidating in those drab prison coveralls, does he?

* President Keane is now former President Keane, after VP Warner invoked the 25th Amendment and chased her out of the Oval Office. It’s a little disturbing that Paley and his chief of staff continued their push to expel Keane, even after confirming Saul was right about the Russians being behind all of this. (“We’ll be wrong about some facts, apparently,” the chief of staff admitted, “but we were not wrong about her.”)

* Boy, Saul’s tech guy Clint sure folded like a cheap card table when Paley’s chief of staff pressured him for information about Saul, didn’t he? C’mon, man! And move out of your mom’s basement, while you’re at it.

* Saul and his team’s idea to build a makeshift tent in their Russian hotel suite, therefore shielding their actions from any surveillance cameras, was quite smart. Soon enough, we’re all probably going to have to do that anywhere we stay in the world if we want any privacy, huh? Sigh.

* Pretty incredible that Carrie and Anson happened to be wearing clothes and masks that allowed them to blend in seamlessly with a group of armed gunmen they didn’t even know existed. Just an awfully lucky coincidence, I guess!