Carrie and President Keane both had people telling them how incompetent they are this week on Homeland. (Gee, thanks, guys.)

In the wake of last week’s psychotic meltdown, Carrie is in treatment, and even receiving electroshock therapy again. (Season 1 flashback!) Her custody lawyer brings her an offer from Maggie: She wants primary custody, with Carrie only seeing Franny one weekend a month. They’re set to go to a hearing if Carrie doesn’t agree, and she defiantly says if they want Franny, “they’re gonna have to take her from me.” Her lawyer warns her, though, that if the hearing doesn’t go her way, she may not even get that one weekend a month. Anson wants her to fight back and offers to dig up some dirt on Maggie — namely, that she served as Carrie’s doctor under an alias and administered meds to her under the table.

Saul brings Carrie news on the Russia front, telling her that Yevgeny escaped back to the homeland, and they’re working on tracking down him and Simone. She offers to put Anson’s team on it, but they’ll need a supervisor, he says: “Really should be you, Carrie.” She declines, though, insisting she needs to put all that aside and focus on being Franny’s mom. He doesn’t really believe she can do that… and we don’t really, either, do we? 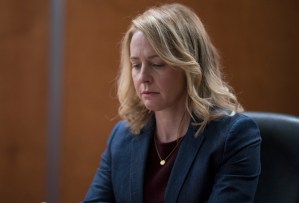 At the hearing, Carrie faces a damning battery of witnesses — Josie, the CPS agent from last season, Franny’s teacher — who all testify about her terrible parenting. Then she has to face Maggie, who says that Carrie “deliberately put Franny in harm’s way” by taking her to Dante’s. She addresses Carrie directly, saying she’s always been headstrong and fearless, and she’s done amazing things with her life, but “safe has its advantages, too.” Carrie clutches an envelope full of incriminating evidence about Maggie she got from Anson, and it looks like she’s about to open it up as a Hail Mary when she calls Maggie over during a court recess.

But really, Carrie just wants to see if that custody offer is still on the table — and if they could maybe bump it up to two weekends a month. Maggie happily agrees, as Carrie finally comes to terms with the fact that yes, Franny is better off with her sister than with her. She never uses the dirt Anson dug up, and when Saul tells her they’ve located Yevgeny and Simone’s hideout, Carrie is able to say yes to supervising Anson’s team, knowing that Franny will be safe with Maggie. And Franny’s going to draw her a picture every day she’s gone! An emotional Carrie thanks Maggie, and they hug as Maggie tells her: “Go do what you were born to do.” 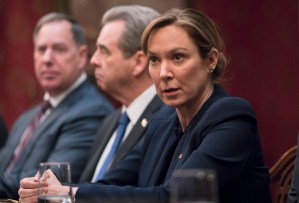 SIGNED, SEALED, DELIVERED | Carrie isn’t the only woman under fire: Keane faces renewed opposition from Senator Paley, who’s ready to invoke the 25th Amendment and declare her unfit to serve. He has half of Keane’s cabinet onboard, but he needs VP Warner to sign off, too. Warner pledges his loyalty to Keane, but when he goes radio silent after a surprise dinner with Paley, she gets nervous and decides to fire the cabinet members who are ready to backstab her, despite Wellington’s protests: “I did not survive an assassination attempt just to fold up my tent and go home.”

Warner is stunned Keane would go this far: He admits to having second thoughts, but he was resolved to stick with Keane. Now the firings have changed his mind, though, and he tells Keane to un-fire them, or he will sign that letter after all. She refuses to play ball — “I don’t like being dictated to” — so he vows to go along with Paley’s plan and declare her unfit. Only Carrie and Saul can save Keane now.

* Boy, this show sure moved on from Dante quick, huh? Confirmation of his death was thrown in as an aside during an unrelated conversation, and Carrie didn’t even show up in time for his funeral.

* Paley sure seemed convinced by Saul and Wellington’s Russian evidence last week, so what changed? Dante’s murder? But why would Keane have him killed? Wasn’t he about to testify for her?

* Hey, another Orange Is the New Black actor! First, we had Catherine Curtin as Saul’s professor pal Sandy, and now Adrienne C. Moore (aka OITNB‘s “Black Cindy”) joins the Homeland cast as Carrie’s custody lawyer Rhonda. Kate Mulgrew must be next: We already know she does a killer Russian accent.

* Just two episodes left this season — and Carrie and Saul are already headed to Russia for the ultimate endgame.