Carrie’s work life and home life collided violently this week on Homeland — and unfortunately, I mean that almost literally.

After last week’s poisoning, Dante is in a coma at the hospital. Carrie tells Saul he should wake up at some point, and as Saul says, “he better.” With Simone vanishing, they need Dante’s testimony to connect the Russians to McClendon’s death. And speaking of Simone: Yevgeny is about to whisk her away to safety on a private jet when he gets word that Dante — who, yes, was working with Simone and Yevgeny — has gone AWOL. Yevgeny tells Simone he can’t leave without knowing what’s happening with Dante, and lets her board that private jet alone. Once he finds out Dante’s been arrested and is now in the hospital, he sets his GPS for the hospital and angrily hits the gas.

Dante does wake up, and Carrie (while still blaming the poisoning on the fake “attorney”) presses him for details on his Russian contacts. He doesn’t trust the government to protect him, but Carrie eventually wins him over, and tells Saul he’s agreed to testify. He also revealed the Russians use Twitter to communicate with their network of spies, and Carrie and Saul hatch a plan to break into Twitter’s servers to manipulate the tweets and identify Yevgeny’s operatives. Saul gets a reluctant OK from Keane, and puts his tech guy to work illicitly infiltrating Twitter’s framework. (Hey, how hard can it be?) 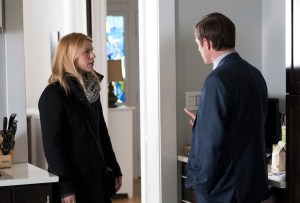 Carrie realizes she has to go home at some point, though, to check on Franny. When she gets there, she only finds Maggie’s husband Bill. He tries to cover for Maggie, but eventually admits she’s meeting with a lawyer about gaining custody of Franny. Carrie, of course, reacts poorly to this news, first with anger, then crying and acknowledging that she’s screwed up a lot lately. (Ya think?) But Bill doesn’t budge, telling her that if Franny “doesn’t get some stability in her life, she’s going to end up just like you.” Ouch. That’s enough to send Carrie running upstairs to pack up her stuff and Franny’s and move out for good.

Back at Saul’s, they’ve found the phony Twitter account the Russians use to communicate; when it tweets out, “Darwin loves Bitcoin,” that’s code for the spies to stand down. They have a standard reply, too (“What about Ripple?”), and once Saul’s guy hacks into the account and tweets out the code, they can see who’s replying and identify them as Russian assets. That includes a wealth-management guy in Connecticut, so Saul sends the FBI to his house to put pressure on him. Sure enough, the guy panics and calls Yevgeny, who now knows the feds have his code. “My network is burning down,” he screams to a colleague, adding: “Dante Allen needs to be eliminated.” 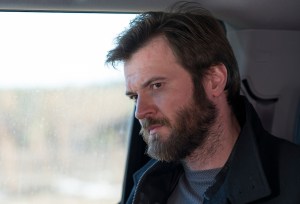 Yevgeny arrives at the hospital and, when an old Russian operative tells him about the tight security surrounding Dante, calmly shoots the guy in the gut so he has an excuse to enter the hospital. Once inside, he swipes a nurse’s ID and sneaks back to Dante’s room. Dante fears for his life, since he thinks Yevgeny was the one who poisoned him, but Yevgeny insists it wasn’t him: “I don’t poison my own people.” In fact, he challenges Dante to call Carrie and ask her point-blank if she poisoned him. And he does… just as Carrie is picking up Franny at school.

She’s just finished explaining to the school principal that she’s totally fine and stable and Franny is totally safe with her, when she gets the call from Dante, demanding to know: “Did you poison me?” She denies it with a few choice expletives, but Dante seems to not believe her, and in desperation, blurts out that Yevgeny is there with him. Yevgeny grabs the phone and starts to smother Dante with a pillow, and Carrie snaps into action mode. She dumps Franny back in the principal’s arms and runs for her car, leaving Franny to scream, “No, Mommy!” Franny runs after her, and when Carrie backs her car out, she almost backs over her own daughter, stopping just inches from her. (Christ.)

She hands Franny back again and hits the road, but she’s clearly shaken: As she speeds recklessly to the hospital, she has visions of herself actually hitting Franny with her car, with a bleeding Franny lying on the pavement. Then as she enters the hospital and hears Dante “didn’t make it,” she flashes back to Brody (!) being hanged to death in front of her, and Aayan (!!) getting shot in front of her, and Quinn (!!!) getting shot in front of her. She reaches Dante’s room, and is met by a nurse… who has Carrie’s face! She yells at Carrie, “What did you do?” while Carrie collapses to the floor, crying in terror. How much of this is real? How off her meds is Carrie? And where do we sign up to testify in Franny’s custody case against her?

* Senator Paley looked like he’d seen a ghost when Saul and Wellington laid out the evidence that Simone and Dante are Russian assets. (Welp, there goes his camera-friendly Senate investigation.) The extra punch in the gut: when he noticed a “UI” by his name, and Saul had to tell him it stands for a Russian term — “useful idiot.”

* Do I even need to say it? Once more, with feeling: Poor Franny. Will Season 7 end with Carrie (correctly) seeing that the girl is better off with Maggie’s family?

* Hey, what happened to Anson and the rest of Carrie’s secret team of kidnappers? They were here for a few episodes, then they disappeared. Discuss.

* Boy, Costa Ronin is pretty great as Yevgeny, huh? He’s like the evil twin of his character Oleg on The Americans.