Although Scott Gimple won’t be The Walking Dead’s showrunner in the AMC drama’s upcoming Season 9, he’s still as psyched about it as any superfan. His successor, longtime TWD writer/EP Angela Kang, “has it under lock,” he tells TVLine, adding that in his new role as the franchise’s chief content officer, “I’m enjoying seeing it come together.” 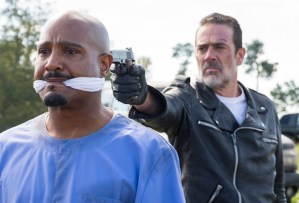 Viewers likely will enjoy discovering what the new normal is for the series’ survivors now that the AHK alliance’s war with the Saviors has ended. “The conclusion of that conflict in some ways was the conclusion of a certain way of life they were following,” says Gimple. And the new world order that they’re pursuing “is a very ambitious dream to put together. It’s enormous, in fact.

“It requires cooperation, and the stakes are much, much higher,” he continues. “That leads to very different types of stories and different sorts of conflicts.”

Who and what are you hoping to see more/less of in Season 9? If you could give Gimple’s replacement one piece of advice, what would it be? Hit the comments.