“Well, it’s difficult to talk about it all, as much as I’d love to.”

Westworld‘s Simon Quarterman is charming. He’s funny. And he’s in no way about to give up the goods about the HBO sci-fi series’ upcoming second season, no matter how nicely we ask.

When the drama returns on Sunday, April 22 (9/8c), Quarterman’s Lee Sizemore — along with a whole bunch of other human characters we met during Season 1 — will be scrambling to save themselves as the robots that populate the series’ titular adult theme park test out their newfound consciousness.

Fans of the show will recall that Lee was the head of Westworld’s narrative department (translation: the guy who wrote the stories the android hosts would act out around guests) who wound up in a plot to help a Delos executive smuggle proprietary code out of the park. But Westworld co-founder Robert Ford took a giant Ctrl+Alt+Del to that plan by ushering his creations to sentience, culminating in a massacre at a company gala held inside the park. 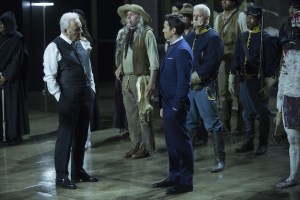 All we really know about Lee in Season 2 is that he is, indeed, alive and at one point seems to be under the control of a gun-toting Maeve (played by Thandie Newton). With the show’s spoiler-phobic nature as a giant caveat, we asked Quarterman about the episodes ahead. Here he is, in his own words, discussing:

HOW LEE RESPONDS TO THE HOSTS’ SIEGE | “He’s incredibly ill-equipped for this kind of situation. I think he lived a lot of his time, you know, entitled and everything’s falling into his lap — the way that he feels it should. You got a brief look at him last season when he gets… just destroyed [by his narrative getting rejected]. I think that’s one of the very few times that kind of happened to him, so being in this situation with Maeve and with his relationship with the hosts isn’t that great. He doesn’t think of them as anything other than props for his story. That’s it. That’s all they are. He has no interest in them other than that. They’re just fulfilling his stories and all the things that he’s conjured up. So yeah he’s completely ill-equipped… We find him floundering.”

HOW LEE FEELS ABOUT HIS PLAYTHINGS HAVING THE UPPER HAND | “The tables have turned completely in this season, and that goes for across the board. Yeah, I think this rankles him, sure, but he’s also hyperaware that he has no other choice but to go along with Maeve [see photo above] because it’s his best shot. Really it’s the only shot he’s got if he’s going to survive.”

ON WHETHER LEE MIGHT HAVE A CHANGE OF HEART RE: THE ROBOTS | “Possibly. I can’t really quite go into all of that, but yeah that’s a difficult one for me to even touch, so I’ll just leave it as ‘possibly.'”

ON LEE’S CAREER PROSPECTS | “Let’s put it this way: I think his aspirations have taken a back seat in the start of this season. His career has certainly found itself very low on the old pecking pole, you know, so it’s not something that he is even really thinking of at all.”

ON WHETHER LEE HAS THE CAPACITY TO CHANGE FOR THE BETTER, GIVEN WHAT HAPPENS TO HIM THIS SEASON | “Anyone finding themselves in a situation such as this, and the challenges that they might face, are certainly forced to maybe look at other areas of themselves that they might not really been aware of.”

Do you think Lee will make it to the end of the season? Hit the comments with your predictions, theories, hopes and expectations for Westworld‘s sophomore season.