Thursday’s Grey’s Anatomy was a biggie for Alex, Amelia and Koracick: The latter duo and DeLuca got to try on young Noah the same risky ultrasound procedure that they hoped would save Kimmie. If you’ve seen ABC’s promo for the episode, you might have a hunch about how well it went, based on Alex’s moment of Hulking out on Koracick for refusing to put Kimmie through the same treatment. If you haven’t seen the promo, or if you want to find out how misleading it was or wasn’t, keep reading. Actually, keep reading regardless — that story was by no means the night’s big jaw-dropper!

‘WE’RE AT THE EDGE OF THE CUTTING EDGE’ | As “Hold Back the River” began, Alex and Jo were happily canoodling, Owen was punishing his luggage for his having made a botched play for Teddy when he’d just left Amelia’s bed, Ben gave Bailey the worst present ever — a pill organizer, and April was back in the chapel, her long-lost smile having returned to her face. At Grey Sloan, having decided not to abandon her research project just because of mean ol’ Marie and her stab at blackmail, Meredith and Jo were frustrated that their lab rat had died. Upon hearing from Owen how badly things had gone with Teddy, Amelia, eager for him to not give up, cheerfully placed a call to Dr. Altman. And just about as quickly as Amelia said hello, she came to the same conclusion that Owen had: “Yeah, that’s not happening.” Working on Noah’s case with Alex, Amelia explained to his mom that the ultrasound procedure was very dangerous, but it was his best chance. “And we want this to work almost as badly as you do,” she added. That said, Mom signed the consent form. Afterward, Alex immediately reported to Kimmie and her grandmother that this was a big step toward getting her cured and back to singing. 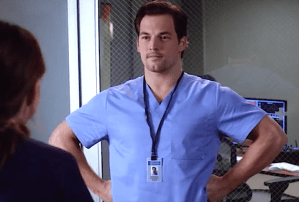 When DeLuca noticed how anxious Amelia was about the very real possibility that they were about to melt Noah’s brain stem, he very sweetly went into superhero pose to psych her up. “C’mon,” said Koracick upon realizing he was being left out. “You know I love doing that, too.” (If you haven’t tried it, you should — it really is kinda fun.) Unfortunately, Noah’s procedure was extremely touch and go — his head kept getting hot enough to make fondue. Fearing that they were about to turn the boy’s head into stew, Koracick called off the continuation of the procedure, so upsetting Amelia that she ran into the hall and puked. (Hmm… could she and Owen be expecting?) That night, Alex checked in on the patient, who was still unconscious. “What did we do to him?” Amelia wondered. The next morning, when Sam woke up with DeLuca in an on-call room, she realized that she’d never been to his place. After he confessed that, yeah, he was between places, she suggested that he move in with her. Finally, Noah awakened, and it turned out he was better — the treatment worked. Still, Koracick didn’t want to do Kimmie’s procedure — that, he said, was years away. There had been too many problems and it could have killed Noah. Alex flew into a rage and attacked Koracick. But at least he stopped himself before beating him up like he once had DeLuca. 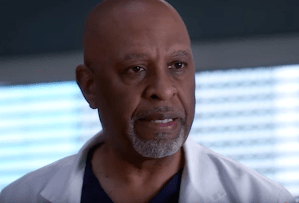 ‘I’M NOT GONNA LET YOU DIE’ | Richard’s heart sank when his AA sponsor Olive wasn’t just admitted to Grey Sloan but admitted with a DNR. “There are multiple options for dealing with liver failure,” he insisted. But she had decided that she’d reached her expiration date. She’d made that decision eight months ago but hadn’t told him, she said, because “I didn’t know how to sponsor you through my death.” Desperate to save Olive, Richard called in reinforcements: Mer and Maggie. Pissed, Olive threatened to reveal to the medical community that he was a recovering alcoholic if he didn’t respect her wishes. Left alone with Mer and Maggie, Olive advised them that, after she passed, Richard would need a new sponsor. “I need to know that he’s gonna get through this without a bottle,” she said. As another of Mer’s lab rats passed away, she dove back into the project with doubly renewed vigor — this was her and Jo’s chance to save people like Olive, dammit! Later, Richard told Bailey that Olive was the keeper of his secrets and “how I feel God’s presence.” When Olive rejected her so-so options for treatment, Jackson commiserated with Maggie, who’d have to somehow get through to her dad; he’d been there with her, after all, when her mom had died. Reaching out to Richard, Maggie said that she wished she could go back in time and not put her mom through that painful experimental protocol and instead give her the ending that she’d wanted — a peaceful one, with the assurance that she’d be OK. As the episode drew to a close, Richard brought into Olive’s room Amelia, frayed from her experience with Noah and Alex, and they had an impromptu AA meeting. 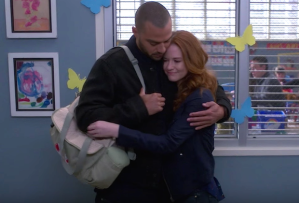 ‘JUST PICTURE ME NAKED’ | Her faith restored, April pulled Koracick aside and apologized for using him just for sex. In response, he said it was fine to just use him for sex. And, sensing that she’d made up with God, he added that he was sure the Lord was cool with her doing that, too. Next, Kepner apologized to Owen for worrying him. “I forgive you completely,” he said, adding that (like him, obviously), she didn’t deserve to be crucified for one bad move. Casey was up next on April’s apology tour. But “I didn’t take it personally,” he said, adding that he’d thought she was having a nervous breakdown. Levi apologized to April before she could even get out an “I’m sorry.” At last, she got to Jackson and confessed, “I lost God” after losing Matthew’s wife. And she’d been furious with Jackson, because during their marriage, he hadn’t wanted to know God. And when she lost Him, it was like Jackson had won. Anyway, she had found God again. And even when it had felt like God wasn’t there, she added, Jackson was. So she thanked him, apologized and gave him a hug. April’s final mea culpa was to Maggie for the scene she’d made at party night. But, since her apology included a mention of her “jumping” her ex-husband in the closet, it was an “I’m sorry” for which Jackson would immediately be sorry. 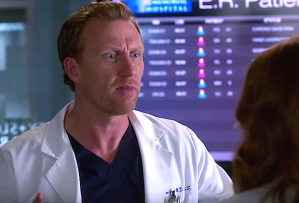 ‘PUMP THAT POISON INTO A COMPLETELY HEALTHY PERSON’ | While Owen took out his anger over the Teddy sitch on Levi, he also discovered that Dana, the wife of Arizona’s former patient Peggy, didn’t have cancer as she’d been led to believe. Soon, he had figured out that Dana’s oncologist wasn’t an oncologist at all. Playing Hardy Boy and Nancy Drew, Owen and Arizona went to “Dr.” Hansen’s clinic posing as a couple. To their horror, it turned out that — nooo! — Arizona actually did have breast cancer! Back at Grey Sloan, April scanned Arizona, and — whew! — she didn’t have breast cancer! (Jeez, that was scary!) Livid, Owen took off to take care of Dr. Hansen. Arriving just as Hansen was closing up for the night, Owen, scary as hell, threatened to administer chemo to him. Finally, sirens blared — Hansen would live, but he was so busted. And in the episode’s last minutes, it turned out that Mer and Jo hadn’t needed the polymer at all — one of their lab rats had grown a new liver without it! Hot damn! At the Bailey-Warren household, Bailey reminded Ben that she wasn’t dead or dying by demanding playfully that they have sex right then and there. Again, hot damn!

So, what did you think of “Hold Back the River”? It felt mean to me, making us believe, even briefly, that Arizona had cancer as Jessica Capshaw is on her way out. What’s your take? Oh, and Amelia — totally preggers, right?