In the basement of The Church of St. Paul the Apostle in Manhattan, a long, wide room where The Rockettes often practice their kicklines and such, rehearsals are taking place for Sunday’s broadcast of Jesus Christ Superstar Live (8/7c), the next entry in NBC’s list of live musical events. 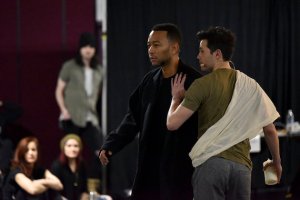 “There’s something timeless and exciting about Superstar, period,” Platt says at a press event weeks earlier. “There’s no bad language in it, and everything is metaphorically, theatrically done, and it’s a concert. Part of its virtue, particularly on Easter Sunday… [is] that it is a family event.

The ensemble also includes Ben Daniels (The Exorcist), Norm Lewis (Scandal) and Jason Tam (One Life to Live) — as the rehearsal progresses, Daniels, Lewis and Jin Ha (Broadway’s M. Butterfly) gather to work out an Act II number called “Trial Before Pilate.” They launch into the scene, with Daniels singing “And so the king/Is once again my guest,” but they don’t get far before director David Leveaux stops the action to smooth out a kink. While Leveaux confers with other members of the behind-the-scenes staff, Tam uses the time to go over a dance combination, marking the moves off to the side of the room. Daniels goofs around by shimmying while the musicians run through a few tricky bars. And while they’re doing that, we’ll use this time to give you a few key Superstar details in advance of Sunday’s show: 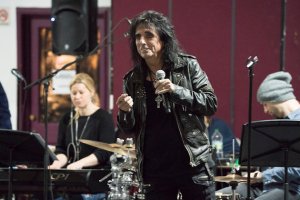 ORIGINAL FLAVOR | Don’t expect any new interpretations or wacky arrangements in Jesus Christ Superstar Live, which uses the original concept album as its, well, Bible. “We’re doing it as Andrew and Tim wrote it,” Meron says; the only change will be the addition of “Can We Start Again Please?,” a song from the 1973 film adaptation. “David is really rooted in the storytelling. We acknowledge that it’s a concept album, so he’s really rooted in everything we can communicate about the relationship between Jesus and Judas and Mary and the disciples,” Dixon tells TVLine.

IN THE HOUSE | Though the bulk of rehearsals are happening in Manhattan, the actual event will be broadcast from Brooklyn’s Marcy Armory, a vast hall which production designer Jason Ardizzone-West (Adele Live in New York City) says he and his crew are transforming into “a very sophisticated, fully functioning, rock ‘n’ roll opera house.” Think broken fresco walls of an ancient chapel mixed with steel scaffolding, as well as wood and fire elements — oh, and the musicians are on stage, “very inherently imbedded in the texture of the design,” Ardizzone-West adds. 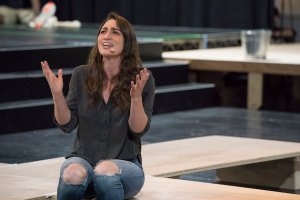 POWER TO THE PEOPLE | While past live TV musicals like Grease and Hairspray have made prominent use of detailed sets and studio backlots, Superstar will unfold across a giant stage flanked by a live audience that will be present throughout the show — some theatergoers will be close enough to touch the actors, which is fine by Legend. “We like touching people and feeling the energy,” he says, grinning. “That’s why we’re there.” Bareilles, who’s about to wrap a run in Broadway’s Waitress, concurs. “It will be nice to help distract from the idea that there are cameras at all,” she says. “Just play to the crowd, and hopefully, that will transcend.”

HOLY THREADS | Forget dusty desert dress: Hamilton‘s Tony-winning costume designer Paul Tazewell is behind Superstar‘s look, which he says is “strongly reflective of contemporary fashion” and includes pieces like distressed jeans and priests’ capes made of synthetic materials. “It’s the most Kanye West I’ve ever looked in my entire life,” cast member Tam, who plays Peter, says jokingly. Still, “All this stuff is stuff that you could potentially see on the street,” Tazewell tells TVLine. 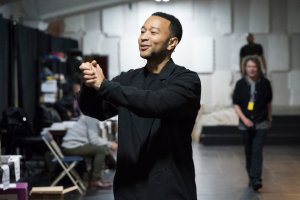 PAGING MR. LEGEND? | Thanks to Legend’s previously scheduled Asian tour, Superstar‘s Jesus was absent for some of the show’s prep time. So he got some early rehearsals before taking off, then rejoined the company about a week before showtime. “Once you get in it then it’s about just embracing the character and the music itself and letting it speak through you,” he said in early March. “That’s what I’m focused on now that I’ve learned the material.”

IT’S A GROUP THING | If you watch closely on Sunday, you’ll notice elements of social dance — moves as diverse as the Charleston and the Bart Simpson — that choreographer Camille A. Brown (Broadway’s Once On This Island) says help signify community among Jesus’ followers. And the disciple who’ll boogie the most during the broadcast? “Definitely Brandon,” she says.

TRIAL BY LIVE MUSICAL | Of the main cast, Daniels has the least singing experience — though he has sung the role of Judas before. “But not professionally,” he says, laughing. “You know, it sort of doesn’t count, really, in your local school hall in the Midlands.” (Editor’s note: The rehearsal we attended was Daniels’ first, and we had no complaints.) 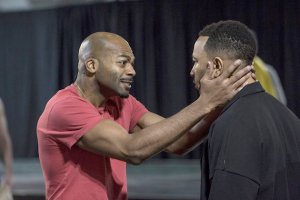 But wait — back in the rehearsal hall, Leveaux and the cast are ready to go. The scene begins again, with Daniels’ Pilate demanding that Jesus defend himself against charges that are certain to lead to his death. The show’s signature bass line kicks in. The members of the company, who at this point are portraying an angry mob, shake their fists and raise their voices. And when they’re done, Leveaux seems pleased.

But even the Son of Man and his followers can’t rest on their laurels for too long; after all, April 1 quickly approaches. “Alright guys,” Leveaux says to his cast, “can we go from the top?”