Roseanne is back — and potentially more relevant than ever.

The revival picks up 21 years after we last left the Conner clan, and wastes no time reversing Dan’s death. Even better, it does so in a way that honors the previous twist ending: the family patriarch finds his wife’s unpublished manuscript in the garage, turns to her and says, “This would have sold like hotcakes if only you hadn’t killed off the most interesting character.” It’s a clever nod, and ties in nicely with the opening scene that finds Roseanne checking to make sure her beloved husband, hooked up to a CPAP machine, hasn’t died in his sleep! 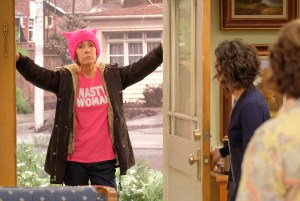 The first half-hour features the buzzed-about feud between Trump supporter Roseanne and her left-leaning sister Jackie. Everybody’s favorite aunt (who is now a certified life coach) arrives at the house wearing a “nasty woman” t-shirt and a pussy hat, and refers to Rosie as a “deplorable.” We’re told they’ve barely spoken to each other in over a year, which makes their first exchange all the more hostile. Jackie mocks her big sis for believing that POTUS would fix health care (Roseanne and Dan’s premiums have gone up, so they can only afford half of their prescription meds), and Roseanne fires back by calling her a “snowflake.”

After a few more references to Russia, taking a knee and a certain “Liar! Liar! Pantsuit on fire,” Jackie reveals why she’s really upset: Roseanne had gotten into her head about voting for Clinton, so she regrettably cast her ballot for Green Party candidate Jill Stein. Roseanne (sort of) apologizes for ever making her sister feel stupid, but can’t quite bring herself to say she’s sorry. Jackie embraces her anyway, and all is supposedly forgiven.

The rest of the episode catches us up with the Conner kids. First up is Darlene, who is raising teenage daughter Harris (Shameless‘ Emma Kenney) and gender fluid son Mark (newcomer Ames McNamara) as a single mom. She initially tries to sell the family on the idea that she’s returned home to help take care of her parents, but we soon discover that she’s lost her job. David is not mentioned, but Darlene’s not wearing a wedding ring. 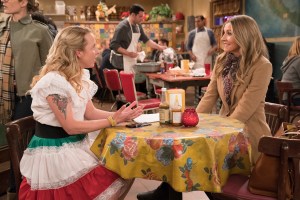 Then there’s Becky, who is now a widow and barely making ends meet as a waitress. She arrives for a family dinner, smack dab in the middle of Roseanne and Jackie’s fight, and announces that she has agreed to become a wealthy woman’s surrogate for $50,000. Dan and Roseanne make their feelings about the arrangement abundantly clear (they don’t like it), but that doesn’t stop their eldest daughter from proceeding as planned. The episode closes by introducing us to Andrea, the woman for whom she’s agreed to carry a baby. She’s played by none other than Sarah Chalke (fka Becky No. 2), and she’s insisting on meeting Becky’s family. 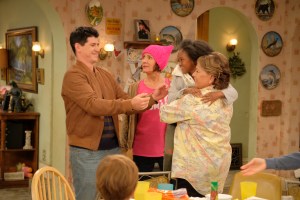 D.J., meanwhile, is now a soldier in the United States Army. He arrives for dinner with his daughter Mary (newcomer Jayden Rey), whose mother is Gina, the black girl D.J. wouldn’t kiss in the school play. Gina remains stationed overseas, while D.J. has just returned from his latest tour in Syria.

And lest you think he was getting Judy Winslow’d, Roseanne does make mention of her youngest son Jerry. We’re told he’s on a “stupid fishing boat where apparently they don’t get phone calls,” which helps explains away the fact that he won’t be making an appearance this season.

What did you think of Roseanne‘s first episode back? Weigh in below, then head over and read our recap of Episode 2!