Everybody’s investigating everybody this week on Homeland… and poor Franny just wants some breakfast.

Carrie’s crew searches every inch of Dante’s apartment while he’s passed out, and Max copies over the contents of his laptop, but they have to scramble and leave when he wakes up suddenly. When Carrie gets home, she has to face an angry Maggie, who had to take care of Franny while her mom was out all night. It gets so ugly that Carrie grabs Franny, marches out of Maggie’s house and heads to a motel… only her credit card gets declined, and Franny is starving. So when an unsuspecting Dante calls, Carrie admits she and her daughter have nowhere to go, and he saves the day, inviting them over to enjoy some of his “excellent pancakes.” 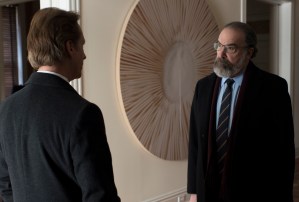 Meanwhile, Saul is busy making house calls: First, he visits Wellington and breaks the news that Simone, who’s set to testify against him in three days, is “almost certainly” a Russian intelligence agent — which understandably throws Wellington for a loop. Then Saul ambushes Max, informing him that he knows about the illegal Wellington webcams and dragging him down to his makeshift office to search through Dante’s hard drive there. (If he doesn’t comply, Saul will nail him for the webcams.) Saul also tells him to bring what he finds directly to him, not Carrie. She can’t be trusted right now, Saul warns.

Dante trusts her enough, though, to leave her alone in his apartment after he and Franny enjoy a few pancakes together. Carrie, of course, goes right to work snooping, but Franny is actually the one to hit paydirt when she finds an old scrapbook of Dante and his ex-wife Audrey, who works for the Treasury Department. Carrie poses as a job interviewer to meet with Audrey and question her about Dante. He told Carrie they split up because of his drinking, but Audrey says no, he just got too obsessed with work and thought he was unfairly blamed for that “mess in Kabul.” In fact, he was fixated on “this CIA station chief who was completely off the rails” who ordered a drone strike on a wedding and still got a promotion. Uh-oh… so he’s been obsessed with Carrie since Season 4?? 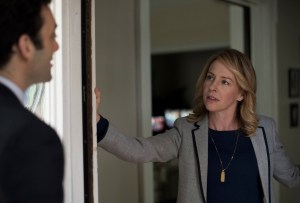 But maybe he doesn’t trust her that much after all: Dante drops by Maggie’s, supposedly to pick up some of Franny’s things, but really to sneak a peek at Carrie’s room, where he finds a profile of himself printed out. He returns with Franny’s beloved stuffed bunny, and Carrie isn’t happy he went to her sister’s unannounced, but she reluctantly agrees to spend the night, tucking Franny and her bunny in. Dante offers her a drink before asking, “What did Audrey say?” Uh-oh… he knows. Carrie is vague, but Dante keeps pressing until she says Audrey told her he was “preoccupied… with someone else.” All this spying is apparently a turn-on, because they start furiously making out, and don’t worry about Franny: “She can sleep through anything,” Carrie tells him (!).

Well, maybe not anything. Saul’s tech guy informs him that Simone’s charity is basically a money-laundering front for Russian oligarchs, and Saul takes the evidence to a judge, hoping to get a court order to interview her before she testifies. But the judge turns him down, calling his request “witness tampering.” So he turns to Max, who dug through Dante’s travel itineraries and found that five of his overseas trips match up with Simone’s. Saul realizes Dante is the key to exposing Simone, so just as Carrie and Dante are going at it, the FBI busts down his door and hauls him out in cuffs, bare-ass naked. That’s enough to wake Franny up, and she leaps into Carrie’s arms as Saul stands there and stares at her, leaving without a word. (He’s not mad, Carrie. He’s just disappointed.) 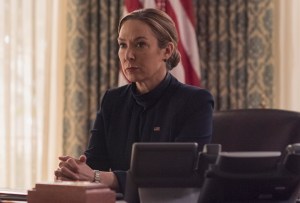 * Keane got a shock when the Simone revelation led Wellington to send her a letter offering his resignation — and proclaiming his love for her? It wasn’t ever spelled out, but his letter called Simone “a relationship of convenience… to hide my true feelings.” Keane ended up not accepting his resignation and asking him not to run away from this fight. But it feels a little off to add a romantic angle to this relationship so late in the game, doesn’t it?

* Beau Bridges made his debut as Keane’s vice president, voicing his concerns about the Wellington rumors. With such a recognizable face in the role, I have to imagine the veep will be a major factor as this season approaches the homestretch.

* This Week in “Poor Franny”: God, where do I even start? From Franny asking Maggie, “Why doesn’t she like to be here?” to her crying after Carrie yelled at her, to her drawing a frown on her pancakes, to her pulling Carrie aside during an argument with Dante and saying “Mom, don’t” (!!), it was an especially heart-wrenching week for Carrie’s kid. We already have more than enough material for a Season 7 “Poor Franny” supercut, don’t we?

* Is it weird that we haven’t heard anything from O’Keefe in a couple weeks? Are the Homeland writers saving him for a late-season twist? He might have some very interesting things to say about these Russian fake-newsers.

* Saul made a funny! When his tech guy asked him what Max’s “skillset” is, Saul gruffly replied: “Irritant.”