Homeland‘s Carrie discovered a hitch in her plan to expose Wellington this week… and she’s not afraid to use everything at her disposal to prove it.

She and Max are still spying on Simone and Wellington via webcam, and can’t believe she hasn’t said a word yet about her kidnapping. She does, however, tell Wellington when she receives a subpoena to testify before Senator Paley’s committee. Carrie wants to warn Paley and Dante before the hearing, but Max reminds her she can’t, because that would expose their illegal webcam activities. So she finds a way to sit in on Simone’s private questioning session with Paley, to see if she can get a clue as to why Simone is so tight-lipped.

At the session, Simone is confronted with hard evidence of her check-cashing odyssey, and her lawyer wants full immunity before Simone says a word. But Simone does admit that “a senior White House official” instructed her to withdraw the money and leave it in the woods right outside the prison where McClendon was killed. Gotta be Wellington, right? Case closed, right? Well, not so fast. Carrie senses something’s up and tells Dante she thinks Simone is lying. He thinks Carrie’s just off her meds and tells her to go home and rest, but she’s not satisfied, so she turns to an old friend for advice. 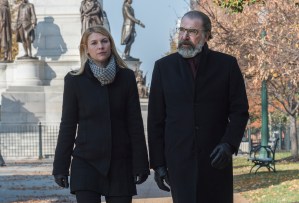 Thus, we have our first Carrie and Saul scene of the season: She tells him, “I’m in a corner, Saul,” and runs down the whole Simone/Wellington saga. When he asks how she knows Simone is lying, she comes clean about the webcams, and Saul almost walks off right there. But he stops long enough to question Carrie: If this is a conspiracy to smear Wellington and discredit President Keane, who has a grudge against her? Carrie starts to put it together — she ran into Dante “by chance,” he showed her the parking ticket — and that chin starts to quiver. Dante is the one behind all of this, and he made Carrie an unwilling accomplice… and now she’s determined to “nail that f—ker.”

So she hatches a plan, gathering Anson and her kidnapping team for some victory drinks along with Dante. They hand Dante a barrage of tequila shots, while Carrie stays sober. (She’s on her meds, you see.) Carrie giggles and flips her hair — we saw her doing this with the troll hacker, too — and flirts with Dante, eventually going home with him and making out. But Dante becomes a little unsteady on his feet… and passes out. That’s when Carrie goes to work, bringing in Anson and his team to search the apartment from top to bottom while a clearly drugged Dante sleeps it off. She even uses his thumbprint to unlock his phone! Don’t fall for Carrie Mathison, boys; you will wake up to regret it. 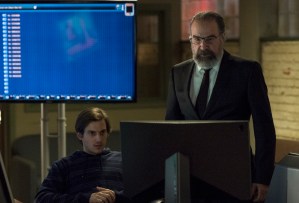 RUSSIA, RUSSIA, RUSSIA! | Meanwhile, Saul is assembling a covert team of his own, pairing former CIA colleague Sandy (played by OITNB‘s Catherine Curtin) with “information scientist” Clint to get to the bottom of the J.J. fake news spawned by Russia. They’ve traced it to Yevgeny Gromov — the muckracker played by The Americans‘ Costa Ronin who took that misleading photo of J.J. — and Clint shows Saul how anti-Wellington news is always spread online by the same automated accounts. Russian bots, that is.

Russian operative Ivan goes straight to Yevgeny, warning him that he got sloppy with the J.J. stunt, and now Saul is breathing down his neck. He calls Keane a “wounded animal” and says she could “strike back in unpleasant ways.” But Yevgeny just brushes him off, even when Ivan threatens to report back to Moscow, saying, “The old rules don’t apply anymore.” And Ivan learns that the hard way: After setting up a secret rendezvous with Saul at an abandoned dock, Saul arrives to find nothing but traces of blood, and Ivan’s necklace. Ivan’s been tied up and stuffed into a bag by Yevgeny’s goons, then tossed into the ocean. Let’s hope Saul isn’t the next one in that bag.

* Wellington’s week goes from bad to worse when he finds out Simone is getting immunity to testify against him — during a press briefing with Keane, no less — and then confronts Simone about it at a restaurant, only to have her end things with him and then pretend like he grabbed her arm hard, yelling out, “You’re hurting me!” We all have the same question about Simone that Carrie does: “Who the f—k are you?”

* This Week in “Poor Franny”: The poor girl asks Carrie to join her and Josie for a game of Go Fish, only for Carrie to ignore her, charging forward on her latest mission. This bad parenting is definitely going to come back to bite Carrie by season’s end, I’m betting.

* An Allison Carr reference! Season 5’s CIA mole played by Miranda Otto came up during Saul’s meeting with Sandy, who referred to Allison a “textbook honey trap.” Hey, that pretty much describes Carrie this week, right? (And Simone, too, I guess.)

* Is Carrie’s sister Maggie really OK with Max lurking around in Carrie’s bedroom all the time? We’ve got to have some house rules here, people.