A well-medicated Carrie got her hands dirty with a few spy games on this week’s Homeland. But is she any closer to the truth?

In her quest to expose Wellington, Carrie assembles a dream team of former CIA colleagues, including a former flame named Anson (Agent Carter‘s James D’Arcy). She briefs her team on her plan to “shake up” Simone, in an effort to tie her to McClendon’s murder. These guys are used to playing rough, though: “Don’t punch her in the face,” Carrie has to remind Anson. They stake out Simone’s office, waiting for her coworkers to leave before they move in; Max disables her car and poses as Triple A to stall her so she doesn’t leave. 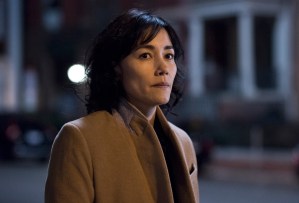 Once the coast is clear, they cut the electricity and get to work, kidnapping Simone and zip-tying her to a chair. Anson grills her on the $50,000 payment to knock off McClendon, and she eventually admits to it. He demands another hundred grand from her before setting her loose, while another guy plants a bug in her purse. They’re thinking they’ll be able to listen in when Simone goes running to Wellington… but after they clear out, they realize the microphone in her purse isn’t working. So Carrie has to go to Plan B.

She tracks Simone to a nearby bar and follows her into the ladies’ room, “fumbling” her purse so she can drop a miked-up pen into Simone’s purse. It goes off without a hitch, and they listen in while Simone sets up a rendezvous with Wellington and orders an Uber to go see him. Mission accomplished, right? Well, maybe not: Simone gets to Wellington — but she left her purse in the Uber! Carrie freaks out that they can’t hear her conspiring with Wellington, but Dante calms her down; he thinks they already have enough evidence to go to Senator Paley.

What he doesn’t know, though, is that Carrie and Max still have those webcams set up at Wellington’s, so they can listen in on his conversation with Simone. But Max has bad news for Carrie: Weirdly, Simone doesn’t mention anything about the kidnapping or the hundred grand to Wellington. Instead, she makes small talk before straddling him for a lengthy lovemaking session. What does this lady have planned for Carrie and company, hmmm? 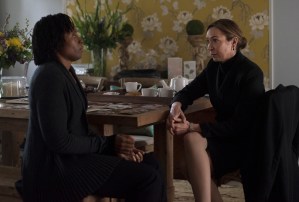 CALMING THE WATERS | The bloody FBI standoff with O’Keefe’s followers resulted in 19 deaths — including 5 FBI agents and 3 children — and Keane is left to do damage control. Saul blames the Russians for that fake news report about J.J.’s supposed “death,” but Keane refuses to use that as an excuse: “We broke it, we bought it.” A memorial for the slain O’Keefe loyalists is planned, along with a massive protest, but Keane wants to see the 5 dead FBI agents honored, too. So she meets with Jackie, the widow of one of the dead agents, and asks her to attend the memorial as an olive branch to the other side. “I’m worried about people killing each other in the streets tonight,” she confesses.

When the memorial begins, Jackie isn’t there, and Keane prepares for the worst, OK’ing the use of water cannons and tear gas to deal with the rowdy protestors. But then Jackie shows up in the church — and though O’Keefe loyalists shout at her to leave, J.J.’s mom Mary Elkins stands up for her, inviting her and her fellow FBI widows to join her in her pew. It’s a miracle! Keane later addresses the nation, lauding the widows for finding a way to unite during hard times, and says she wants to meet Mary Elkins. Yeah, my cynical side says there’s no way this would really go down like this… but it was nice to see, just the same.

* Saul’s hunt for the source of the J.J. fake news report led him to needle an old friend for information on a particular Russian muckraker named Yevgeny. Will Saul get to the bottom of this whole Russian meddling thing before our own government does? (Survey says: very likely!)

* Carrie and Dante’s romance keeps developing. He’s even keeping a close eye on her meds. Aw!

* The spy mission to “shake up” Simone was mostly successful, I guess, but I’m confused: Why didn’t Anson and his colleagues wear masks while kidnapping Simone? Now she knows exactly what they look like. Seems like that’d be something they’d learn on Day 1 on CIA school, no?