O’Keefe’s conspiracy-theory chickens came home to roost this week in a terrifically tense Homeland — and man, did they ever make a mess.

With the FBI surrounding his West Virginia hideout, O’Keefe and his loyal listeners settle in for a long siege with power generators, jugs of water — and lots and lots of guns. The family’s mom is worried about the children, but O’Keefe assures her he’ll give himself up before anyone gets hurt. He’s a little late, though: J.J., the teen with the O’Keefe tattoo, chases his dog through the woods, only to see the feds shoot the poor pup dead. An enraged J.J. points his gun at them… and gets shot in the gut. An FBI agent runs out to help him, but the other survivalists arrive and snatch up J.J., taking the agent hostage. Yeah, there’s no way this ends peacefully now. 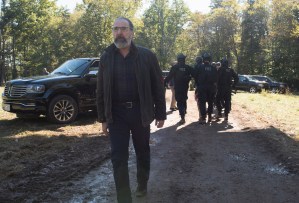 While the family rushes to patch up a bleeding J.J. on the dining room table, O’Keefe looks stricken, as if he’s just now realizing what all of his heated rhetoric has led to. (Just you wait, buddy.) Saul calls in, wanting to transport the kid to a hospital, but O’Keefe admits: “I’m not in control here.” The FBI doesn’t want to budge, either, until their agent is returned safely, but a call from President Keane herself seals the deal: An ambulance drives up to take J.J. to the hospital. The survivalists are wary of the medics and pat them down thoroughly… but they don’t catch one of the medics planting a bug inside the house before leaving. Sneaky!

O’Keefe goes live to broadcast a fresh rant about Keane’s “trained assassins,” but J.J.’s grieving mother cuts him off, and after a deal is struck to get the women and children out of the house safely, it’s looking like cooler heads might actually prevail. Yeah, about that… a rabble-rousing journalist — hi, Oleg, from The Americans! — sneaks into the hospital where J.J. is being treated and snaps a misleading photo of him on a gurney after the doctors leave, spinning it as “FBI Lets Boy Bleed to Death.” A conservative news outlet picks it up, J.J.’s family thinks their son is dead… and then all hell breaks loose.

J.J.’s dad takes revenge by shooting the FBI agent hostage in the head, and the FBI batters the house with gunfire in response. (Keane calls Saul, hoping there’s still a peaceful solution here, but he gravely tells her: “It’s too late. It’s done.”) O’Keefe hides in the basement, trying to broadcast one last bit of outrage — “We’ve been betrayed!” — before being silenced by tear gas. As the feds haul him out in cuffs, he sees the dead bodies of his listeners lying in the yard… and when Saul stares him down with a withering glare of disappointment, an ashamed O’Keefe can barely meet his gaze. 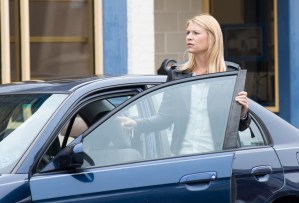 FOLLOW THE MONEY | With all the fireworks on the Saul/O’Keefe side, Carrie’s story takes a backseat this week, but she makes some progress on the Simone front. She hands over the contents of Simone’s hard drive for Max to dig around in, then heads out to trace Simone’s steps when she got that parking ticket close to McClendon’s prison. She parks where Simone parked and spots a check-cashing place nearby. By lying to the clerk that Simone is her sister and off her bipolar meds — where’d she get that idea from, I wonder? — she gets him to fess up: Simone came in there for a one-time cash transfer of $9,950.

That amount is conveniently just below the threshold that would get noticed by authorities, but Carrie thinks that’s not enough to pay someone off to kill McClendon. Max digs up travel receipts on Simone’s hard drive that show her stopping at four more check-cashing places, so we’re up to almost 50 grand now. This all distracts Carrie, though, to the point where she forgets to pick up Franny, so Maggie forces Carrie to swallow her Seroquel in front of her to make sure she’s taking it. After a groggy Carrie buys illicit meds from a sketchy drug dealer to self-medicate, she presents Dante with the evidence of Simone. It’s not enough to bring her in, he says, so Carrie has an idea — but it’s “completely illegal.” Well, why let that stop you now, right?

* Wellington, weirdly, admitted to Keane that he lied and authorized that Syrian air strike without her permission, claiming she needed one “in the win column” — and Carrie was listening in, via Max’s webcams. Wellington offered to resign, but insisted he just wants to help show the world Keane can be a great President. Um, by overriding her direct order? Good to know our first female president will just have her agenda shouted down by mansplainers anyway.

* Again, the conversations between Saul and O’Keefe were a highlight this week. Well, they’ll have plenty of time to continue their philosophical debate in a maximum-security interrogation room.

* Don’t think I didn’t notice that O’Keefe used an American flag to cover his nose and mouth during the FBI assault. What kind of patriot are you, buddy?