This week on Homeland, both Carrie and Saul found themselves in grave danger. (Carrie’s was mostly her fault, though.)

After last week’s violent tussle with a 4chan hacker, Carrie rushes straight to her therapist — the guy’s blood is still spattered on her forehead — and confesses that she thinks her lithium might be wearing off. (Gee, ya think?) “Impulse control is becoming a problem,” she admits before choking back sobs. When a worried-sick Maggie confronts her at home, Carrie says her therapist wants her to go into a drug-induced coma for a few days to break the manic cycle she’s in. She’s frantic at the thought of her bipolar disorder creeping back in: “I can’t raise a kid if I’m at the bottom of a black hole with no walls.”

So Maggie agrees to help, using the drug Seroquel to put Carrie into a deep sleep. But before she can doze off, there’s a knock at the door: It’s Dante, who has new information about the woman Carrie spotted in Wellington’s house. Her name is Simone, she works for an NGO and she’s had an on-and-off thing with Wellington for years. He wants to dig deeper, but Carrie stops him. “I’m sick, and I’m going to be sick for a while,” she tells him. But when he tells her Simone got a parking ticket right near the prison where General McClendon died, that’s enough to convince Carrie. She downs some of her niece Josie’s Adderall (!) and heads out with Dante to chase down this lead. 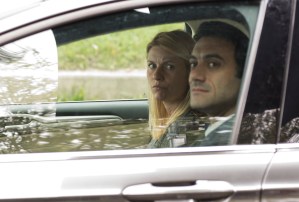 They stake out Simone at her D.C. townhouse, and even bond a bit: Dante tells Carrie that an ex of his was bipolar, too. When Simone leaves, Dante follows her by car, leaving Carrie to sneak inside Simone’s house (!!) through a window and snoop around. She finds the parking ticket, along with photos of Simone and Wellington together, and snaps pictures of them with her phone. On her way out, though, she’s stopped by cops, who got a report of a break-in. Carrie lies that she was just there to feed a friend’s cat, but when she refuses to give the cops her name, they haul her downtown for further questioning. (Dammit, Carrie… you could’ve been asleep and getting better right now!)

Carrie’s put in an interrogation room with a female cop, and when acting tough doesn’t work, she breaks down in tears, claiming she’s in a custody battle with an ex and an arrest will make her lose her daughter. (Which is sort of true, actually.) But she refuses to let the cop call social services, and that’s the last straw: She’s dragged kicking and screaming to get fingerprinted. Magically, Dante shows up to bail her out; he got all records of her arrest scrubbed. Once they’re out, Carrie admits she’s terrified Franny will be taken away from her again. Dante sits in silence with her, just listening — and is something more than friendship brewing here? 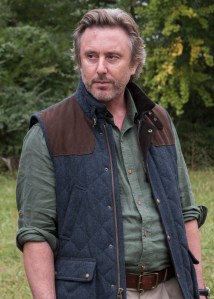 WHERE’S THE O’KEEFE? | Saul, meanwhile, has tracked O’Keefe down to that West Virginia family shack in the woods and asks the feds to stay back while he goes in alone. The kid with the O’Keefe tattoo pretends not to know where he is, but soon, O’Keefe emerges and informs Saul that if he’s leaving, “it won’t be without a fight, I can tell you that.” With O’Keefe’s well-armed followers and the FBI staring each other down, he and Saul sit down to chat, with O’Keefe insisting he’s just exercising his right to free speech. Saul counters that he’s breaking the law by peddling lies and conspiracy theories: “You’re poisoning the conversation.” (This is a riveting exchange, by the way. Kudos to Mandy Patinkin and Jake Weber.)

O’Keefe agrees to negotiate, but while Saul takes his terms of surrender back to Keane — she balks at a televised trial — O’Keefe laughs to his female producer that Saul “has no idea what’s about to hit him.” She runs out to warn the feds: Reinforcements are coming. And just then, a convoy of pickup trucks scream up and take Saul hostage. A tense standoff ensues, with the O’Keefe side finally letting Saul go after the feds threaten to take them all out via sniper. But they won’t surrender, either, and the FBI settles in for a Waco-style occupation, with Saul left to marvel at the heavy military artillery being brought in. Remember when he said “no one will get hurt”? 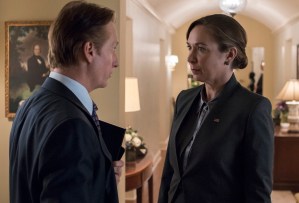 * Wellington, you snake. Keane’s chief of staff tried to talk her into authorizing a Syrian air strike — a strike Keane had already said no to, twice — as “a show of strength” to knock O’Keefe off the front page. She said no (for a third time), so what did Wellington do? He went behind her back and lied to a general, telling him Keane authorized the strike and passing along her authorization code without her knowledge. And what was with him advising Keane to drop all the charges against O’Keefe? Is he trying to take down Keane’s administration from within?

* I feel like I say this every week, but: Why, Carrie? Why couldn’t you just concentrate on getting better and let Dante handle investigating Simone? He did get her out of jail scot-free, but I’m still worried. Any little slip could lead to Franny being yanked out of her arms again — this time, for good.

* A strong week for Claire Danes, though. Unfortunately, the worse things get for Carrie, the better Danes’ performances end up being. Welcome back, Carrie Mathison’s Cry Face!