Allow me to suggest an alternate title for this week’s Homeland: “Carrie, What the @%&#$*! Are You Doing???” 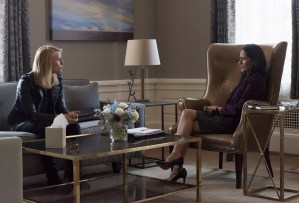 Carrie meets with a therapist to talk about the latest turmoil in her life — and there it is, our first Peter Quinn mention of the season. A clearly emotional Carrie remembers her late friend, saying, “He would’ve understood what I’m doing. He never let me down.” She’s adamant that Keane needs to be taken down, and that she’s taking her meds every day. But the therapist points out she’s taking lithium, and that can become ineffective if you take it for years. (Uh-oh.) That gives Carrie pause… but it doesn’t stop her from logging into Wellington’s surveillance cams again, where she sees an unidentified woman enter his home and leave a note.

She takes a screengrab of the woman’s face and tries to get her source Dante to identify her, but he hangs up on her. So she (stupidly) logs onto the notorious troll haven 4chan and posts the screengrab on an anti-Keane message board, asking if anyone recognizes her. One commenter claims to know, and sends Carrie a JPEG. She (stupidly, stupidly) downloads it, and… bam! Her laptop is now infected with ransomware, locking her out of her computer unless she pays five thousand dollars. Why, Carrie, why? Doesn’t the CIA train their agents not to click on unverified links?

Carrie starts to panic: She’s broke, so she can’t afford the five grand, and her laptop has the very illegal Wellington spy cams on it, so she can’t go to the cops. She calls in Max to help, but even he can’t fix it — and the hacker, listening in to their conversation via Carrie’s laptop mike, doubles the ransom to $10,000. And when he finds the Wellington cams, he doubles the ransom again to 20 grand: “You’re going to be my golden goose,” he tells Carrie. But she goes on the offensive, claiming that Wellington wanted the cams in his house because it’s a sex thing; he gets off on being watched. Then she starts flirting with the hacker, offering him “an exchange of services.” She takes off her shirt and bra for him via webcam, but once she senses him getting excited, she cuts him off, telling him, “It’s not for free, asshole.” 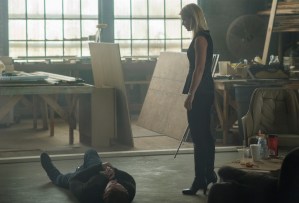 She wants to meet in person, and the hacker directs her to an empty warehouse with a very creepy vibe. There, the hacker reveals himself — he’s a skinny white kid, like you’d expect — and she starts to undress for him… but when he gets close, she hits him with a vicious headbutt and unsheathes a collapsible baton, beating the hacker senseless with it. She threatens to kill him unless he unlocks her computer (“I’m CIA, motherf—ker”) and records him doing it on her phone. With her laptop unlocked, she strolls out of the building, leaving the hacker bloodied and whimpering on the ground. 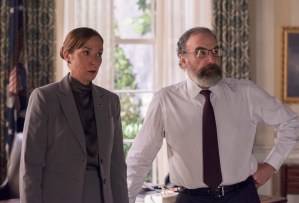 BETTER HAUL SAUL (OUT OF JAIL) | General McClendon’s mysterious death is fueling even more conspiracy theories about President Keane, and she recognizes it makes her look bad, so she agrees to “change the conversation” by freeing Saul and the two hundred other intelligence officials she detained. In turn, Saul agrees to be her national security advisor, and Keane introduces him in a hastily arranged press conference. (Carrie fumes when she sees Saul and Keane together on TV.) But there is one catch to Saul’s new position: Wellington informs him that bringing in the fugitive O’Keefe is his first order of business.

Saul heads down to the mattress store where O’Keefe did his broadcast last week, and finds the locals angrily protesting the FBI presence. They’ve detained one of the cops who escorted O’Keefe out, and roughed him up for resisting arrest, which Saul instantly recognizes as a bad move. He tries to play “good cop” with the guy, telling him he’s exposing the people he’s sworn to protect to serious harm. Saul insists he knows O’Keefe, O’Keefe knows him and he just wants to find him and talk: “No one will get hurt.” Yeah, after seven seasons, we know better than that, don’t we? 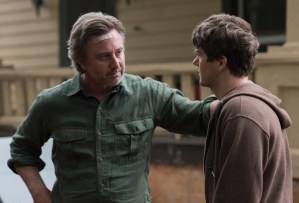 * Speaking of O’Keefe: He’s still broadcasting on the run, this time from the dingy basement of a West Virginia family. But O’Keefe might be outstaying his welcome: First, he shows how hapless he is with an actual gun in his hand by firing one and letting it kick back and gash him in the forehead. Then a young listener — who even has an O’Keefe tattoo on his arm! — overhears him referring to the family as “the lunatic fringe.” Uh-oh… could a disgruntled listener end up turning O’Keefe over to Saul and the feds?

* We’ve got new opening credits, people! Season 7’s version plays the usual dissonant jazz, along with a few disorienting glitches, over visions of a manic Carrie and violent protests. I’ll take that as further confirmation that Carrie’s mental state is a major plot point this season.

* I just have so many questions about Carrie’s storyline this week: Didn’t she worry that the hacker would record her striptease and use that against her? Couldn’t he have already made copies of her incriminating files? Would a hacker really agree to meet someone he’s extorting just for sex? Does Carrie really think he’s just going to go away after that?

* Poor Franny, asking Carrie after she raged at Keane during Saul’s press conference: “Why are you mad all the time?” At least the kid didn’t wander in while Mommy was doing that webcam striptease.

* LOL at Max’s response to Carrie’s financial woes: “I can loan you 753 dollars.”

* Not one but two Mr. Robot alums in this week’s episode: Sakina Jaffrey as Carrie’s therapist Dr. Meyer, and Sandrine Holt as the mystery woman in Wellington’s house. If only Elliot could’ve dropped by to help Carrie with her laptop…