Homeland‘s Carrie may not technically be a spy anymore… but she still knows how to throw on a wig and start some trouble. (It’s like riding a bike, apparently.)

As Sunday’s Season 7 premiere opens, Carrie is unemployed — President Keane dumped her as part of her paranoia-fueled purge, following last season’s assassination attempt — and now she and Franny are living with her sister Maggie in the D.C. suburbs. Maggie’s husband Bill works for Keane’s Treasury department, and their teen daughter Josie is a budding activist, comparing Keane to Stalin. Carrie agrees, calling Keane a “fascist” while noting that Saul is still in jail, along with two hundred other intelligence agents. Maggie just wants Carrie to find a job, and Carrie insists she’s about to leave for a job interview. But when she leaves, she packs a burner phone… and decides against bringing a gun.

Turns out she’s having a good old-fashioned secret rendezvous in the back of a restaurant with Senator Sam Paley (The Good Wife‘s Dylan Baker), who’s been a vocal critic of Keane’s tactics. Carrie’s been leaking information to Paley from an ex-FBI pal of hers who’s been looking into the two hundred agents Keane had detained, and can’t find a shed of evidence any of them were involved in the attempt on Keane’s life. Now Carrie says her source is ready to testify on the record — and his testimony can implicate Keane’s right-hand man David Wellington. 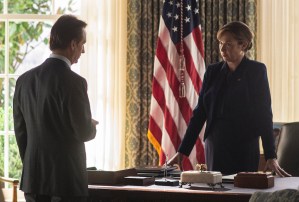 Speaking of Wellington, he’s busy talking Keane off the ledge after the sentencing of General McClendon, who actually did orchestrate the Keane attack. Keane testifies at McClendon’s hearing, asking for the death penalty, and is crushed when she learns he’ll just spend life in prison. (She even sees it as “condoning another attempt on my life.”) Wellington tries to calm her down, but she abruptly cuts him off, ordering him to “fix it.” And yes, she means that in a Tony Soprano kind of way.

Carrie snaps back into spy mode, checking into a D.C. hotel under a fake name, then throwing on a brunette wig and checking into another hotel under another fake name. She asks the front desk to hold an extra key for her “husband,” and watches from the lobby as a man picks up the key. But he’s being tailed by another guy, so Carrie hustles her “husband” — Dante, her source — out of the hotel and into the trunk of her car. They escape, but their cover’s blown, so now Carrie needs a new venue to introduce Dante to Senator Paley. 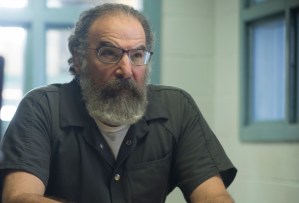 Saul, meanwhile, is stewing in prison, and he gets a visit from Wellington, who tells him Keane is feeling “vulnerable.” She wants Saul as an ally, and is prepared to offer him the position of National Security Advisor. (When Wellington asks Saul if he’s surprised, Saul’s reply is classic: “I’m in a federal f–king prison. What do you think? Of course I’m surprised.”) Saul will only agree, though, if Keane releases all the other agents who were arrested along with him: He won’t work for “a woman who can’t rise above her own vindictiveness.” 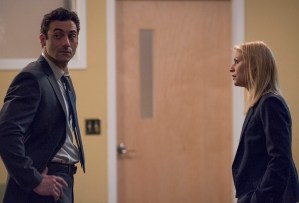 Scrambling for a new venue, Carrie (inexplicably) decides to use her sister Maggie’s medical office after dark, even having teen Josie drop off the keys. (Not only does Josie see Carrie in her wig, she also spots her taking Dante out of her trunk.) The meet-and-greet doesn’t go great: Dante refuses to go on the record, despite Carrie’s pleas, and when Senator Paley shows up, he feels ambushed. (C’mon, Carrie, you didn’t clear it with the guy first?) Dante panics and bolts, roughly tossing Carrie out of the way when she tries to block the door. Her back channel to the Senator is burned, too: “You can’t call me again,” Paley tells her on his way out.

Back at home, Carrie has to face the wrath of Maggie and Bill, whose daughter left Franny with some strange guy “because Aunt Carrie really needed help.” Maggie confronts Carrie about her steep credit-card bill ($38,000 in debt, under a number of aliases) and worries Carrie is off her meds again. Carrie insists she’s not paranoid — Keane really is that bad — and fires back at Maggie: “You’re the one married to a collaborator!” (Oof.) She tries to apologize, but the damage is done, and when Carrie looks in on a sleeping Franny, you wonder if she thinks she’s gone too far. There is some good news, though: Our old pal Max managed to sneak inside Wellington’s home as part of a surveillance sweep and install a series of cameras, so Carrie can keep an eye on the guy from her laptop.

Wellington has a lot to answer for, too: When McClendon is booked into federal prison, he’s forced to strip down and endure a cavity search. As he’s getting dressed, his breathing stops. He gasps and falls to the ground in pain — and dies. The guard who searched him watches coldly on a security camera, then carefully removes the gloves he used and seals them in a plastic bag. Yikes… maybe those labeling Keane as dangerous aren’t paranoid after all? 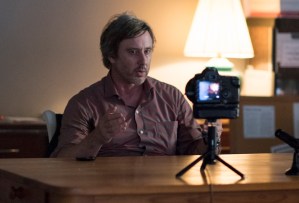 * The blustery, Alex Jones-y talk radio host O’Keefe is on the run, broadcasting his fiery anti-Keane rhetoric from random spots across the country. (His producer identifies a mattress store as friendly by spotting a pro-Second Amendment sticker outside.) The female producer is tired of his misogynistic quips about Keane going through menopause, though, and threatens to quit. But when rogue cops show up to escort them away safely before federal marshals close in, she agrees to stay on. (O’Keefe tries to kiss her, too, at one point. So they were a thing?)

* A paranoid President closing ranks and declaring war on the intelligence community? Nah, would never happen.

* So unless I missed something, the late, great Peter Quinn wasn’t mentioned or referenced even once this episode. Huh. Well, we miss him, anyway.

* Nice to see Amy Hargreaves back as Maggie for the first time since Season 4. But Josie was a little girl the last time we saw her; did she really have time to grow into a surly teen by now?

* Also: Carrie’s usually so careful about covering her tracks, so why didn’t she wait until Josie drove away to let Dante out of her trunk?

* Funniest line of the week came when Carrie handed the Senator’s aide a burner phone, and the aide replied with: “Is this spy s—t really necessary?” Lady, we’ve gotten seven seasons out of “this spy s—t” so far. Just go with it.

* Of course Carrie works out to frenetic free-jazz. Of course she does.

Now it’s your turn: Grade Homeland‘s Season 7 premiere in our poll, then drop your thoughts in a comment below.