What terror awaits Supernatural‘s Sam? What Timeless mystery did you not even know existed? Did The 100‘s Death Wave rattle relationships? Is Criminal Minds steering toward a cliffhanger? Read on for answers to those questions plus teases from other shows.

After getting scoop on Supernatural‘s Dean, can we get some for Sam, too? Anything big coming for him? –Maria
Brace yourself for Episode 21. “Sam deals with something pretty harrowing and terrifying and has a few owies,” star Jared Padalecki tells TVLine. Meanwhile, co-showrunner Andrew Dabb assures us that despite Sam’s recent crisis of faith, he and Dean are “charging forward” and “very much are on the same page.” As they continue to gather the ingredients needed to open the rift between worlds, the brothers remain focused on the mission, doubts be damned. “Once the rubber hits the road, once they’re on that path, they’re hellbent to get it done,” Dabb says. “That’s where we’re going to see our guys, really, for the rest of the season.” 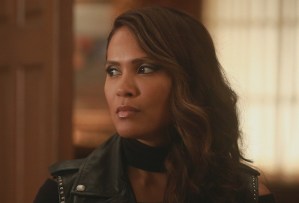 Anything regarding Lucifer? Is Maze going back to hell? –Marina
“Maze certainly wants to get back to Hell,” says co-showrunner Joe Henderson. “But to get there, she may need to make her own deal with a devil. And the question will be if the cost is too high even for her….”

I’m looking forward to Season 2 of The Gifted. Any scoop? –Lorraine
If you’re ready for Caitlin to get a bit less domestic, know that Amy Acker is, too. “This first season was about getting into this world, and now I’m ready for crazy stuff to happen,” she told TVLine. “Not that crazy stuff hasn’t already happened, but my character has stayed pretty much in ‘the Mom realm,’ so I’m excited to see if they let me go outside of that. The reason I’ve always liked doing genre shows is that anything can happen.” 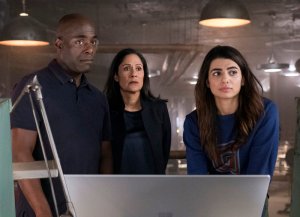 Any Timeless news? —Mary
File this under Oddly Interesting: Paterson Joseph says “there’s a good reason” why Connor Mason never goes into the time machine he created. “Midway through the season, you’ll know why…,” he adds. “There’s a very specific, personal reason.”

Anything regarding The 100? Maybe some Bellarke info? —Suzie
Discovering that Clarke survived the Death Wave is “obviously a huge shock” for Bellamy, Bob Morley teases. “She’s also focused on her family unit, which is Maddie, and [Bellamy] has [his] space crew. So they deviate in that sense. … Everyone’s got their people now, and there’s a lot of the ‘my people,’ ‘your people’ stuff as per usual. In this particular season, it’s very definitive as to who people are loyal to. So that kind of dictates where their relationship is, and where it goes.”

Any scoop on the Counterpart finale (airing next Sunday, April 1)? —Isa
Simply said, do not underestimate the significance of that surviving gunman collapsing smack dab on the border between the two worlds. “It has a ripple effect on everybody, [him being] in that classic sort of ‘demilitarized zone,’ that no man’s land there,” J.K. Simmons told me. “It does complicate matters for the Howards — and for many other people.” 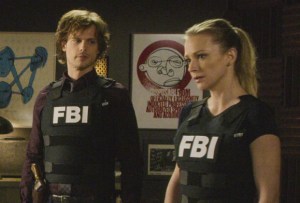 I need some clarification about Criminal Minds. Although you have it listed as a “safe bet” on the Renewal Scorecard, the season finale has been moved to 18 April. This is starting to look and sound like a series finale. So what gives? Is it the end of the season or the series? —Amanda
Multiple sources tell TVLine that, given that Season 13 ends with a heart-in-your-throat cliffhanger, there is every reason to believe that the show will be renewed. And if it’s not, there are going to be millions of pissed-off fans lamenting the lack of closure. (Matthew Gray Gubler echoed the “great cliffhanger” tease, then proceeded to basically tell me which lives will be in jeopardy, but I’ll keep that to myself. For now.)

Any scoop on Catherine’s return to Hawaii Five-0? —Jen
When Catherine (played by Michelle Borth) returns in the Friday, April 13 episode to enlist McGarrett and his particular set of skills to track down some hidden munitions, “We got to get a little closure,” Alex O’Loughlin says. Having previously danced around the fact that he was about to propose when she skipped out of town on a secret mission, this time they delve a bit more into the missed opportunity. Afterward, O’Loughlin says, “They sort of go, ‘We always were great friends; maybe we shouldn’t have slept together in the first place. But it’s good to be friends again.'” 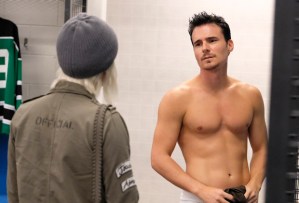 What can you tease about iZombie? —Simy
Next Monday’s episode introduces Daniel Bonjour (Frequency, The Walking Dead) as a documentary filmmaker… and Liv’s new love interest! “I was very excited that their ‘ship name would be ‘Livon,’ which was clearly no accident knowing our writers,” star Rose McIver says. “He’s completely different [from] her boyfriends [that] we’ve met in the past… It’s a version of a person Liv connects with that we haven’t seen before, which is cool.”

Will Gotham‘s Jim see Lee again? And if so, when? –Felicity
You mean aside from glimpsing her jack his car? The forever-estranged lovebirds will share scenes “certainly in the last few episodes,” Morena Baccarin told me, “and then in the finale.”

Any scoop on Chicago P.D.‘s Burgess and Ruzek? –Victoria
“They both have strong feelings for each other. It’s just a question of whether they’re going to act on them, given the complexities of working together,” hedges showrunner Rick Eid. For her part, actress Marina Squerciati is all for some “Burzek” action. “I do love the slow burn. I don’t want it to be a quick thing, and I feel like they are feeling each other out,” she says. “But I would love a little bit more to sink my teeth into, to be honest. That’s the trick with having a love story on a procedural show, because it’s never going to be the A-story, which I’m OK with. I don’t want it to be like a romantic show. It’s not what it is.” 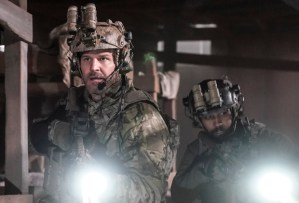 Since we are nearing the end of the season, do you have any scoop on the SEAL Team finale? —Elspeth
I am hearing that despite this week’s false lead, Jason and the team will get closer than ever to avenging Echo Team’s murder. But not everyone makes it out alive when their ‘copter takes a deadly hit, effecting their team forever.

Scoop on The Fosters, please! My favorite show is ending and I was wondering if you could tell me anything about the last few episodes. –Edil
“Jude has a really great story in the final three [episodes],” executive producer Joanna Johnson previews. “Now he’s at university, and we’re going to find him struggling like everyone else to find out his identity in the world without the support of his everyday family [and] living at home… We’re going to [see] him as a more mature 19-year-old kid.”

Real questions from real people get real answers! If you need the Inside Line on a favorite show, email InsideLine@tvline.com! (With reporting by Vlada Gelman and Scott Huver)