The 150th episode of CBS’ Hawaii Five-0 crossed some t’s and dotted some i’s with regards to Steve and Doris’ complicated dynamic. But it also brought some closure to a thread that’d been dangling for well over a year.

Crashing McGarrett’s cozy home-cooked dinner date with Lynn, Catherine Rollins (played by Michelle Borth) stormed into the picture to deliver the news that Doris had been captured and imprisoned at a CIA black site in Morocco, in the course of trying to spring Wo Fat’s father. As Steve busily prepared to launch a rescue op, Catherine made wonderfully awkward small talk with Lynn, who let slip that a marriage proposal was imminent at the time Catherine bailed on Steve last season.

Catherine made no big, obvious deal upon hearing that she missed out on a proposal, though the topic eventually came up after Doris’ rescue was successfully pulled off (with help from Chin Ho, Kono and Grover) — as detailed in the dialogue sample shared below.

When Catherine revealed to Steve that she knew about the proposal, why did he push for what her answer might have been? “I think it’s an important piece of information,” Alex O’Loughlin tells TVLine. “I mean, [wanting to know] out of curiosity is one reason, but also, I think he wants to hear her say, ‘It wasn’t you, you weren’t the problem. I was the problem.'”

Indeed, the former couple’s discussion of this very delicate piece of personal business came just as Catherine was about to flit off to another covert assignment — one she didn’t give any thought to bailing on, even after admitting she would have said yes to being his wife. 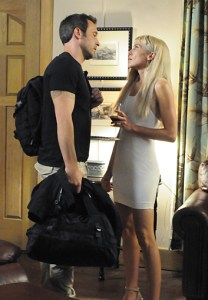 should fans of Steve’s comparatively nascent romance with Lynn (played by Sarah Carter) interpret his interest in Catherine’s hypothetical proposal response as any kind of slight, a red flag?

“Absolutely not. No f–king way,” O’Loughlin makes clear, adding that Catherine is not “the one who got away” but “the one who was not meant to be.”

“As far as I’m concerned, he was just curious,” the actor adds, “because for him to get serious with anyone else — really serious, if that’s what happens — he needs closure on [Catherine], and [hearing her answer] gives him that closure. He’s like, ‘OK. How ironic. I guess this just wasn’t in the cards,’ you know.”

Grade Episode 150 and then revisit McRollins’ (latest) good-bye below:

MCGARRETT
Do me a favor, tell me something —
are you happy, doing what you’re doing?

CATHERINE
Yeah…. I am.

MCGARRETT
Thanks for coming to get me.

CATHERINE
You know, just because I’m not in your life
doesn’t mean I don’t still care about you….

MCGARRETT
I know. I know.

CATHERINE
See you around, sailor.
[Begins to climb steps, stops, turns, comes clean]
I know about it.

CATHERINE
I know what you were going
to do before I left…. I’m sorry.

MCGARRETT
Just, you know, out of curiosity…. If I’d have
asked, what would you have said?

CATHERINE
[Thinks for barely a moment]
I would have said yes.
[McGarrett processes, nods. Then, before they say goodbye]
Hey — Lynn, she seems like a nice girl. I hope that
works out. You deserve to be happy.

What did you think of H50 No. 150, which also included Chin Ho losing his bid to delay Sara’s adoption, and Grover comically enlisting his son to get the 411 on Grace’s boyfriend for Danny?