Wednesday’s Season 11 finale ended on a giant cliffhanger: Though the pandemic in Scully’s visions was averted, it came with a price — the apparent death of her son, William/Jackson, at Cigarette Smoking Man’s hand. When a grief-stricken Mulder lamented that his son was dead, Scully sadly corrected him: The boy was, indeed, Cigarette Smoking Man’s child, created with technology (which explains his ability to blow people up using just his mind) and implanted in her all those years ago.

But there’s a silver — some might say downright miraculous — lining to this gray cloud: As Scully revealed to an incredulous Mulder in the hour’s final moments, she’s pregnant with their child.

The twist seems to complicate things for the sci-fi drama, which — if it does nab another pick-up — may have to forge ahead without series star Gillian Anderson, who recently announced that she is done playing Dana Scully.

We talked with X-Files creator Chris Carter for his take on the canon-changing season and the prospect of a Scully-free Season 12.

TVLINE | Honestly, at the beginning of the season, I thought that Cigarette Smoking Man’s claim that he was Jackson’s father was a fakeout. But you went there. Tell me about when you knew this was a twist the story was going to take.
[Laughs] I thought of that way back in Season 7 when Scully had taken that fateful trip with him and lost time and found herself in a bed with pajamas on and not knowing how she got there and him telling her that he had science beyond her imagination. That, for me, was a perfect time to set up what played out in this four-part series which we called “My Struggle.”

TVLINE | The reaction from fans online was pretty intense after the season premiere. What type of feedback do you think you’ll get now?
People will either love me or hate me. [Laughs] I think they’ll have reasons for both. It certainly is one of the most interesting cliffhangers that the show has ever had. 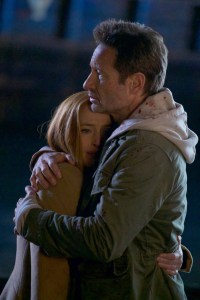 TVLINE | The other side of that cliffhanger is what Scully told Mulder at the very end of the episode: She’s pregnant with their child. Some fans were speculating that was what she whispered to him at the end of Episode 9. Clearly that’s not the case, but what did he say?
I can’t tell you, but I think his reaction would’ve been much bigger if she said that to him in the last episode.

TVLINE | Scully’s revelation seems like it would be deeply involved in something you were talking about earlier this season, which is the future of the show — if Fox renews it — and whether or not Gillian Anderson will be around for it. Scully’s pregnancy seems like a big thing to not have her around for. Can you speak to the back and forth regarding the future of the show?
I can’t imagine there wouldn’t be more X-Files, in some shape or form. I think there are lots more stories to tell and ways to tell them. I’m leaving this as a giant cliffhanger, and Gillian has announced that she’s not coming back. Hard-core X-Files fans know there have been no real endings on the show.

TVLINE | Speaking of endings: I’m not even going to ask you about Cigarette Smoking Man, given how often he’s popped back up from the dead on this show.
[Laughs]

TVLINE | But it looks like Skinner might’ve been able to dive under the car before he was hit. Is that a possibility?
Yes, there is a possibility that he is lying there alive, under that car. I’m hoping that’s what people take away from it.

TVLINE | You had hoped to get Robert Patrick for this season. How would Doggett have figured into this season if you had been able to secure him?
I wanted him to come back in the third of the four-part “My-Struggle” series. He’s been unavailable to us because of his other work. It actually worked out that the character Spender, Mulder’s half-brother, was able to essentially occupy that same space.

TVLINE | Let’s go deep: Was Scully living in that spectacular house all season?
Yes. They lived apart, as they have since right after the second movie, when we presume that they were together. But that reunion and partnership dissolved, as it has before in the series.

TVLINE | Do you think where they are at the end of the season is a new era in their relationship, or are they doomed to always repeat this pattern of being together and then apart?
No, they talked about it in Episode 3 this season, [about] the future and where they would be when they get old and they retire. As those questions were posed in Episode 3 and answered to some extent, they are still interesting questions. I don’t know how long David [Duchovny] and Gillian would want to play these character. Gillian says she’s done. How long they would want to continue this journey. So it’s really hard for me to say. 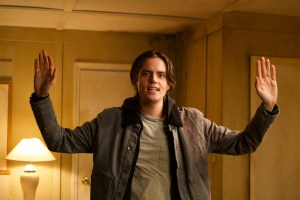 TVLINE | Along those lines, if this is the last episode of the series, are you good with where it ended? What are your feelings about this being your last X-Files?
For me, it’s not an ending. It is, in a way, a beginning. So I don’t see it necessarily as a conclusion.

TVLINE | Can you envision a spinoff that centers on Jackson, for example?
[Laughs] No. People have asked me that question and right now, he is a 17-year-old kid dealing with the strangeness of his life and the idea that he would find any proscribed or limiting category in life is not unimaginable.

TVLINE | You know what I always forget? You are the man who created Cigarette Smoking Man, so you can deceive, inveigle and obfuscate better than anyone else.
[Laughs]