It will officially be all hands on deck when ABC’s Once Upon a Time gets its own happy ending.

TVLine has learned that Jennifer Morrison, TV parents Ginnifer Goodwin and Josh Dallas, and Emilie de Ravin are all set to return for the series finale, which will span two Friday nights (May 11 and 18) and is titled “Leaving Storybrooke.” 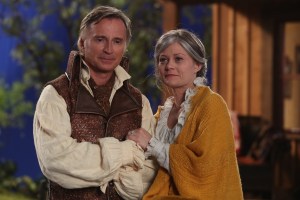 Also, Rebecca Mader’s run as Zelena will continue into the finale.

“Seven years after we set off on this magical journey, we prepare to say goodbye to the cast, crew and writers that made the ‘happily ever after’ that is Once Upon a Time possible,” co-creators Eddy Kitsis and Adam Horowitz said in a statement. “We couldn’t think of a more fitting way to say farewell than by reuniting so many of the characters that our fiercely loyal fans spent years with on their adventures. We hope everyone joins our Once family, old and new, for what we hope will be the sendoff of a lifetime befitting this stellar cast and its incomparable fans.”

Although Morrison, Goodwin, Dallas and de Ravin did not return as series regulars for Season 7, Morrison guest-starred in the second episode (to among other things establish that Emma was pregnant with Killian’s child back in Storybrooke), while de Ravin similarly put in one encore (setting in motion Rumple’s mission to find The Guardian and reunite with his late love).

Neither Goodwin nor Dallas — both of whom recently booked pilots for the fall TV season — had appeared during Season 7 in any capacity, though as Snow White herself surely would have advised you, “Always have hope”!

Which of the many returns has you most excited for the big finale?