Matthew Gray Gubler‘s dream of clowning around finally came true — even if it threatens to put a brief dent in the Coulrophobics 18-49 demo.

For this Wednesday’s episode of Criminal Minds (CBS, 10/9c), Spencer Reid’s portrayer stepped behind the camera for an 11th time to spin a tale of two brothers and their frighteningly different approaches to donning funny wigs and make-up.

Here, Gubler talks about tackling the well-trod ground of killer clowns, as well as weighs in on the BAU’s recent roadblock and Reid’s stint as college professor. 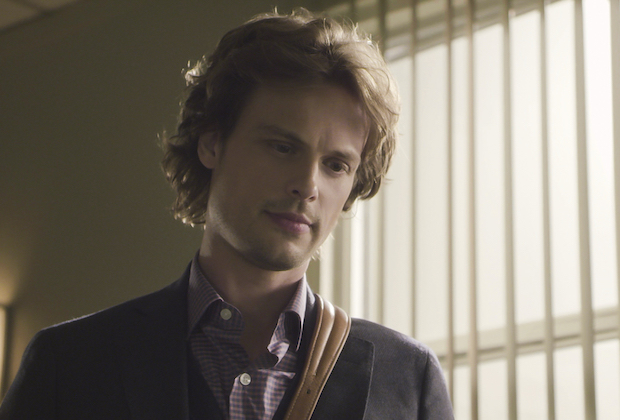 TVLINE | I was thinking that I last saw you on my birthday, August 1 at the Summer TCA party, and you already knew back then you were directing a clown episode.
I did, and it went wonderfully well. For four years I’ve been trying to get a clown one happening. It was a tough nut to crack — or a tough nose to honk — for Criminal Minds because we’re not a supernatural show and the writers wanted to make sure that they could crack it from a psychological standpoint. We finally did, and couldn’t be more proud of the outcome.

TVLINE | At the time that I saw you, had you just gotten the word from [showrunner] Erica Messer that she would be writing this…?
Erica wrote the first one that I directed [of 11], and we have worked together three or four times over the course of the show, so we have a lovely shorthand. She just was like, “What do you want to do?” I said, “Let’s finally make the clown one happen.”

TVLINE | Scary clowns have obviously gotten heavy play in pop culture over the past year or so. Was it almost intimidating, or simply a great challenge, to find a fresh spin?
Good question. I’ve always been fascinated by clowns — I actually just graduated from clown school — so I have a very soft spot for them. I know what you’re saying about the recent interest, but they’ve always been pertinent to society, I think, for a lot of good. I’m in love with the concept of a clown because it’s very important to laugh at ourselves. I feel like every day we wake up and we put on this thin veil of what society tells us we need to do. We need to “wear a tie and a suit,” and pretend to be reserved, and not mess up, and not fall down stairs. And at the end of the night when we see someone doing that and bouncing back up from that — and maybe even doing it with a smile — it gives us, as a society, great relief and joy and happiness. I’ve always been fascinated by that aspect of it.

What’s as interesting to me is the fact that we love clowns because they’re naïve and they’re childlike and they’re unexpected and they don’t play by society’s rules, so there’s nothing more terrifying than the concept of someone like that but with a dangerous agenda. What happens when you put an axe into the hand of…

TVLINE | Someone who doesn’t “play by society’s rules.”
Exactly. An unpredictable force, someone that maybe doesn’t understand, someone that’s so filled with wonder and enchantment that they don’t know what’s happening. It’s sort of like Frankenstein’s Monster, I think, in a weird way. He’s almost a clown, and I’ve always been interested in that interplay. Again, when I was 13 I used to dress up as a scary clown for Halloween….

TVLINE | Kirsten [Vangsness] told me you hosted a Clown Prom on set.
I did! I had a clown costume contest and the crew dressed up. I’ve always been enchanted by it, so one thing that Erica and I were very careful to protect is I feel like there are a lot of great clowns. It’s almost like a double-sided emotion I have towards it, where I wanted to pay respect to the beauty and the art of sincere clowning and not just have it be something scary and “clowns are this and that.” [This episode] is really about the struggle between two brothers — one is a lovely clown who wants to entertain people and make people happy, and the other one is not, and it’s about showing both sides of that spectrum. The good that clowns bring to the world while simultaneously showing you how horrifying it can be if one of them runs amok.

TVLINE | Without revealing too much about why one of them “runs amok,” would you say his origin story is almost heartbreaking?
It is. There’s a silent film starring Lon Chaney from 1924 called He Who Gets Slapped. It’s about a man who becomes a clown and he is just slapped in the face the whole movie and it’s a really beautiful story ultimately about love and sacrifice. It had a big effect on me so much so that I always try to challenge myself when I direct these episodes to do something that the show has never done before. For this one, we managed to make a three-minute, completely silent teaser. The beginning of the show is complete silence, which has never been done.

[As the episode unfolds] it’s about the death of an industry, which is something that I think everyone can, to a certain extent, identify with — whether it’s the loss of the horse-and-buggy as it was replaced by the car, or Uber taking over taxi driving…. 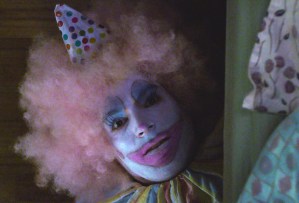 TVLINE | Toys ‘R’ Us going bankrupt….
Exactly. Truly, the good guy [here] is a good clown; the bad guy is just dressed as one. I was very careful, because my heart goes out to preserving the wonderful things that clowns provide us, which is happiness and laughter, which to me is holy. I also as a director of course love the primal emotion of fear, so I always try with everything I do to couch it in those opposites. I always try to dress my UnSubs — or in this case do the clown makeup — in very light, welcoming, pastel colors, because I find when there’s that softness and sweetness to something, it becomes scarier.

TVLINE | I noticed that color scheme when I was cutting the photos for this feature.
It’s the least threatening, visually, and that inherently makes the audience lean closer and feel a weird sense of comfort while simultaneously being scared. I love the world of clowns. I love them for laughter. I love them for scares. I love them for everything.

TVLINE | I think you’re trying to say is that you’ve delivered the most sympathetic portrayal of killer clowns.
I would hope so. I always try to paint everyone as a real human and, if I can, for one split second make someone understand why someone might do something terrible like this. That creates an interesting mental challenge that engages the viewers.

TVLINE | Turning to this season as a whole, is the Barnes business all behind us now?
Barnes is pretty neatly wrapped up.

TVLINE | Prentiss pretty masterfully threw Barnes (played by Kim Rhodes) under the bus last week. I was cheering from my couch.
Kim Rhodes is incredible, so it was a real pleasure and honor to work with her. But that’s all done. The clown episode is a completely standalone episode, which is the kind I like to direct. Anybody can watch it for the first time and not know anything about the show and have a beginning, middle, and end that’s satisfying without any loose ends. 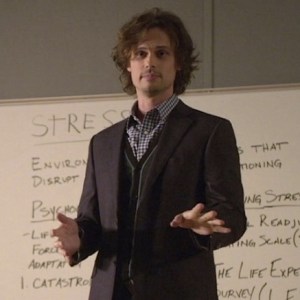 TVLINE | Lastly, I had to wonder: Did you get a kick out of the scene last week where Reid was teaching the college course and the female students were fluttering their eyelashes at him like he was Indiana Jones?
You know what’s so funny? I love Reid and I’m very protective of him, and my pitch was the exact opposite. My immediate thought was he’s passionately giving this speech and you can tell that he loves what he’s doing, and then it cuts to the reverse and you realize there’s one person in the class. I’ve always seen Reid as sort of the ultimate outsider, so it was a little bit…. I think it worked [as written], I don’t doubt that it worked, but I kind of was hoping more for Reid to be more like I really am! [Laughs]