Is Lucifer about to Cainblock himself? Is S.H.I.E.L.D. heading for a wedding? Which #OneChicago couple will face fresh conflict? Will Timeless get musical? Read on for answers to those questions plus teases from other shows.

Have any scoop on the Pierce/Chloe romantic relationship on Lucifer? —Emily
“After Monday’s episode, Chloe and Lucifer seem closer than ever, don’t they?” co-showrunenr Joe Henderson tells Inside Line. “What better time for a wrench to get thrown in the works?? Expect Pierce/Chloe to start heating up very soon… and Lucifer may be partially to blame for it!

Anything on Suits‘ Harvey and Donna? —Ana
Only that the Season 7B premiere (airing Wednesday, March 28 on USA Network) kicks off immediately after the pair’s kiss, and quickly dive into its aftermath — including how it will change Harvey and Donna’s working and personal relationship (as well as Harvey and Paula).

Any scoop on what will transpire on The Big Bang Theory this spring? —Mario
Although it seems as if Leonard, Penny, Sheldon and Amy are the only residents of their multi-story, elevator-challenged apartment building, the fact is they do have other neighbors. And we’ll meet a few of them in an upcoming episode. “Sheldon and Leonard are vying for the head of the Tenants’ Association,” showrunner Steve Holland teases of the plot. “And Leonard has to go knock on some apartment doors to do some politicking.” 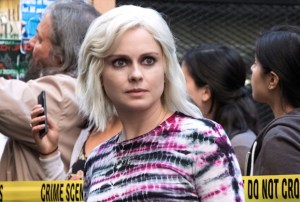 Now that the humans of iZombie‘s Seattle know about zombies, any chance Liv will be able to reunite with her mother and brother? —Dina
“We have so many storylines that we are servicing in this show, and we have so many regulars with their own storylines, that it hasn’t made sense quite yet for that to be a focal story point,” star Rose McIver said when we visited the show’s set. “But it’s definitely hovering there. I hope we come back to that soon. I am fascinated by Liv’s dad, who he is…. There was talk about trying to bring it in this season, but it’s been such a dense plot. I think the writers have focused, at the moment, on what’s going on in wider Seattle.”

Any Timeless scoops? Potential storylines involving certain historical events? —Eve
It sounds like the Time Team’s trip to Hollywood circa the 1940s is going to be particularly delightful — and lyrical! “We’re trying to figure out what Rittenhouse wants with Citizen Kane, because they’re trying to steal that movie, and we meet Hedy Lamarr,” Abigail Spencer previews. And to that end, “Wyatt and Lucy go undercover as the next big musical duo,” the actress shares with a laugh. “[Rufus is] a playwright-turned-screenwriter, and when we get the attention of [Paramount Pictures president] Barney Balaban, [Rufus says], ‘And this is my new musical duo, White Folks!’ It’s really hilarious. … We go into a party that he throws with [William Randolph] Hearst, so it’s Barney Balaban and Hearst and Hedy Lamarr, and Barney Balaban is like, ‘You guys should get up and perform a song,’ and we’re like, ‘No, no, no, no.’ Wyatt and Lucy fight about it, and then Wyatt pushes Lucy on stage, and comedy ensues.”

Any Criminal Minds scoop to share? It’s been a while! —Diane
As one might have surmised when we first told you about it back in August, the Matthew Gray Gubler-directed episode involving clowns is “creepy,” Kirsten Vangsness told me. She then said to watch for this moment: “When we’re breaking down the case, [Agent Simmons] talks about how he’s afraid of clowns, and there was an episode years ago where Garcia said she hates clowns — because once at a birthday party a clown honked her breasts. So we have a little moment where without saying anything, I’m like, ‘I hate clowns too!'” Fun fact: Gubler taunted coulrophobics off-camera as well. “He held a Prom Clown contest, where everybody dressed up as clowns,” Vangsness shares. “It was pretty weird.”

What’s next for Chicago P.D.‘s Sgt. Voight now that the body of his son’s killer has been found? —AJ
The discovery presents “a major problem” for the sergeant and “certain other members of his team,” showrunner Rick Eid teases. “Olinsky and Voight’s relationship will be put to the test. The body’s discovered, an investigation begins, and you’ll figure out who your friends are.” 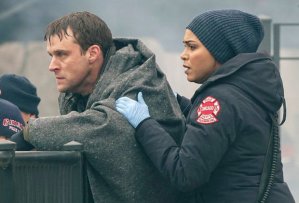 Will we see Chicago Fire‘s Dawsey tackle problems together this season as opposed to being at odds with each other? —Rachel
Eep, we’ve got bad news: “There’s some conflict coming” for the married couple, showrunner Derek Haas previews. “We have a new firefighter [played by Damon Dayoub] coming into the firehouse who’s got a history with [Dawson]…. I’m not going to say whether it was romantic or not, but they know each other from just out of the academy.”

We know it’s Agents of S.H.I.E.L.D., but can we hope that we might get to see FitzSimmons actually having a wedding? —Eva
“I hope so,” Elizabeth Henstridge told us at the 100th episode party, “but Simmons doesn’t have the best track record of things turning out well!” Iain de Caestecker is of the same, skeptical school of thought. “I don’t know if we’ll ever see it,” he said. “It’s something that might be, hopefully towards the end of the show, hinted at, maybe in a flash forward, but I don’t know. The cool thing about their relationship is it’s been kind of a roller coaster, but through it all, you’ve always felt that they’re kind of inseparable. They’ll always kind of come back together. They’ve got a bond that’s kind of unbreakable.”

When is Ducky coming back to NCIS? Miss him! —Shellie
David McCallum in fact returns next Tuesday, March 6 — in a truly wonderful episode guest-starring Drew Carey as a retired Marine Sergeant — and then also appears in the March 13 episode, in which American Pickers host Mike Wolfe plays himself. 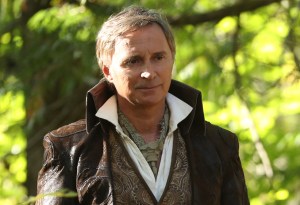 We haven’t heard anything about Once Upon a Time‘s Rumple in a while! Anything that can be said on what challenges will come up for him in his quest for the Guardian so he can unite with Belle? —Ashley
“We know that he has a very tough mission, which is to resist his darker impulses so he can keep his heart clean and go back to Belle, and that is going to be challenged,” says co-creator Eddy Kitsis. “Whether as Weaver, as Rumplestiltskin or as Gold, he is the Dark One who wields the most powerful dark magic, and at some point someone’s going to want to take that knife. And so I would say that we’re going to see a couple of people go after him … and it is going to be very tough for him to not punch back.” Bonus scoop: The continuity nerds out there will be happy to know that an upcoming flashback will explain why Rumple was back to his scaly self at the time the new curse hit.

Any plans to have a more serious and meaningful relationship between Chicago Fire‘s Sylvie Brett and Chicago P.D.‘s Antonio Dawson? –Marybelle
The romance will be “reignited in [next week’s] crossover,” but Fire showrunner Derek Haas says on-and-off is “kind of now the pattern with them.” As he notes, “I think it’s realistic because I have known plenty of friends who have had relationships like this one, where they’re right for each other, and then they’re wrong for each other, and then they’re right for each other, and you, as a friend, have a hard time keeping up.” And when it comes to a longterm “Brettonio” relationship, TV logistics often get in the way. “We’re trying to figure out how we can even do that, honestly, from a scheduling standpoint,” Haas admits. “But I really like their chemistry. And they’re cute together, they’re great actors. So it’s not going to be over any time soon, but it’s not going to be as stable as Casey/Dawson.” 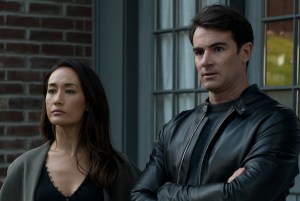 Any scoop on Designated Survivor? —C.B.
If you’re one of the handful of remaining viewers wondering what Damian Rennett was retrieving from his pocket when Hannah went ahead and shot him, showrunner Keith Eisner says that “ultimately” we will get that answer. “That’s a slow reveal, but yes… there are more shoes to drop with Damien and the hacker story, I promise.”

Can find out which villains are going to share scenes on Gotham? Will we get Riddler and Jerome? Riddler and Scarecrow? Penguin, Riddler and Jerome? —Alexandra
As Robin Lord Taylor will detail in an upcoming TVLine feature, you of course are getting a cra-a-a-azy amount of Penguin/Jerome action over in Arkham. Additionally, Cory Michael Smith told me, “There’s a really interesting ‘alliance’ where Penguin and Riddler find each other again.” And though not a villain per se, Smith also said, “There’s some fun stuff between Gordon and Nygma toward the end of the season, that has to do with Lee Thompkins.”

Do you have any information on who is after Danny on Hawaii Five-0 and why? —Sarah
I am hearing that there will soon be a resolution to “Who shot Danny?” when the team was infirmed mystery, and it will reveal a past relationship Danny had literally right before meeting Rachel.

Real questions from real people get real answers! If you need the Inside Line on a favorite show, email InsideLine@tvline.com! (With reporting by Vlada Gelman and Scott Huver)