Iris West-Allen takes on the mantle of The Flash‘s resident speedster during this Tuesday’s episode (The CW, 8/7c) when a bus meta transfers Barry’s powers to his wife. The twist was just what star Candice Patton needed to get through the grueling, overcast Vancouver days as the show heads into Season 4’s final episodes.

“It kind of reignited my love for the character, not that it ever went away,” the actress said during a recent press screening. “You do these shows for four years, 23 episodes [a season]. It kind of can feel monotonous.” So getting to suit up and go out into the field “reignited my love for [Iris] and her tenacity and courage and strength.” 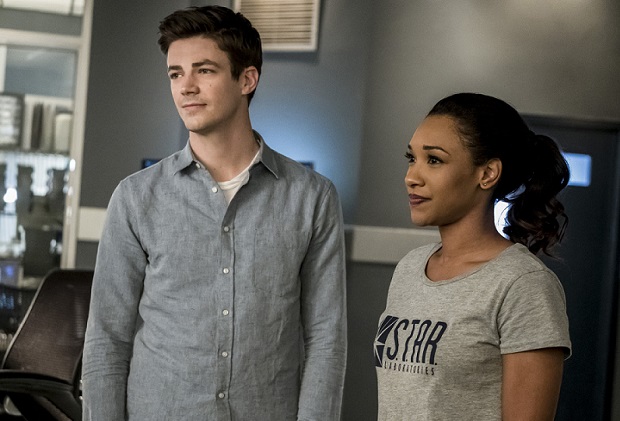 The plotline also gave the writers a chance to craft a different kind of origin story. “We knew we were going to do it in one episode, so it’s not like she can go through all the trials and tribulations that Barry went through,” executive producer Todd Helbing explained. Instead, they focused on two goals: “We wanted to have her do something that Barry’s never done before,” with the help of his expertise. “But we really wanted to have this dynamic [where,] when they [switch] places, she gets to now know what it’s like for Barry every time he goes out there, and Barry gets to know what it’s like for her.”

Added Patton: “It’s about Barry and Iris — it’s a complete role-reversal — and the team trusting in her, and her getting her moment to step out behind the console and be a leader in a different way.”

But stepping into a speedster’s suit is not so easy. For starters, Iris’ mask “was a bit of a challenge,” Patton shared. Originally, the team leader was supposed to don Ralph Dibny’s mask, but seeing as how he’s “a structured man,” the look “was not cute on my face,” Patton said. “We put it on in the fitting, and I texted Todd immediately, and I was just like, ‘No.’ I just trolled him all day, sending him photos of what I thought I looked like, like the Minion, and I was just like, ‘Please don’t make me look like this on screen!'” (As for the purple jacket, there’s a reason the producers chose it, which will be revealed soon. Hmm, could it be related to this?) 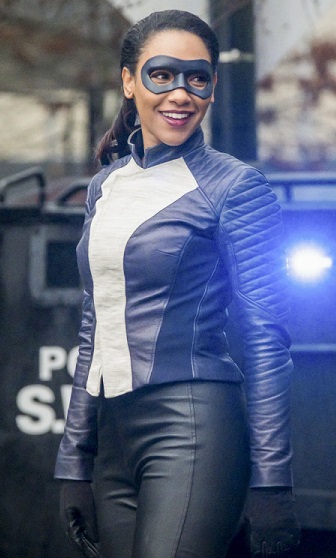 Then there was the fake running, something Patton has watched her castmate Grant Gustin do for years, thinking she would never have to deal with the same difficulties. “There is no school for acting in front of a green screen, not that I’m aware of,” the actress lamented. “It’s like your arms are moving, your legs are not, which is a weird thing. Grant, God bless him, he was giving me tips. He was like, ‘Don’t stand up straight and do it, because you’re going to look ridiculous. You literally have to hitch over.’ … It was weird and interesting and fun and challenging all at the same time. It was great. I’m so happy that I got to do that. [But] I don’t know that I’d want to do it every day.”

Flash fans, are you excited to see Iris as a speedster? Hit the comments with your thoughts!