Following a few words from Carrie Underwood — which, let’s be real, probably would have been spoken by Kelly Clarkson were it not for her commitment to The Voice — ABC on Sunday (finally!) returned American Idol to the airwaves.

Despite a new trio of judges — Luke Bryan, Katy Perry and Lionel Richie, each of whom shined in this premiere without stealing too much focus from the contestants — ABC’s Idol feels a lot like the one we spent 15 years watching on Fox, complete with all the requisite cheese we’ve come to expect. (For example, blasting “Life Is a Highway” while showing footage of a tour bus driving down an actual highway might be a little too on-the-nose for some shows, but not Idol!)

Before I continue, I’d like to address one of several elephants in the room: I know many of you were expecting and/or hoping to see Michael Slezak‘s byline at the top of this article, but just as ABC is rebooting the franchise, so too must we all reboot our expectations. No one could cover Idol like the Great and Powerful Slezak™, but I’ll do my best to fill his shoes, hopefully without tripping over the laces.

As I approach my first season as an Idol reviewer, I ask the spirits of judges past to bestow upon me their most precious gifts: Simon Cowell’s brutal honesty, Randy Jackson’s perfect pitch and Paula Abdul’s penchant for nonsensical tangents. (I ask for nothing from Mariah Carey — except maybe her penthouse apartment from that ridiculous episode of Cribs.)

On that note, let’s talk about the 12 most memorable (for better or worse) auditions from the first night: 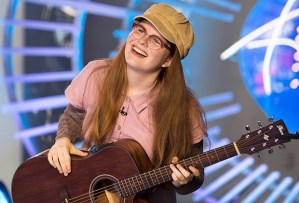 CATIE TURNER, 17 | The first audition of ABC’s Idol, Turner had me at “I know I’m a little awkward.” (Self-awareness is important in this business, people!) Unfortunately, things got a little… sad from there. “Sometimes, I can make people tense just by being around them,” she continued. “I’m not popular — look at me!” That’s when Turner, who at 17 has never known a world in which American Idol didn’t exist, performed “21st Century Machine,” a brilliant original song about how the media affected her as a girl growing up in America. Bryan applauded her “wisdom,” Richie gushed over her voice and Perry silently pondered how she could get away with stealing the song and passing it off as her own.

RON BULTONGEZ, 22 | Confession: I’m still not sure how I feel about this one. Don’t get me wrong, I was fully invested in his backstory — which involved escaping an abusive father in the Congo, immigrating to America with his mother and breaking the cycle of abuse with his own infant son, all of which Bryan called “dag-gum inspiring” — but I was underwhelmed by his performance of James Bay’s “Let It Go.” Frankly, it was a bummer after all that build-up. And the judges seemed to agree, with Richie telling him, “I want you to come back with your identity.” (To make matters worse, ABC played the actual Bay song as Bultongez exited the room, reminding us all what it was supposed to sound like.)

Then came the first twist of the night: After dismissing Bultongez from the audition room, Richie called him back. (I guess finding one’s identity can be done during a commercial break.) “I couldn’t get you off my mind,” Richie said, before changing his vote to a yes. We never really found out how the other two judges felt about Bultongez’s voice, but considering they gave him a nickname — the oh-so-clever “Congo Ron,” because I’m sure that’s what he wants to be associated with forever — I’m guessing they also approve. 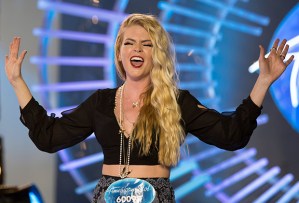 KOBY, 26 | ABC’s Idol may not be in the business of merciless mockery via the traditional bad-audition montages, but some singers — like this Colorado coconut, whose bats–t crazy original song consisted only of the lyrics “The devil never stops coming for you” — invite the mockery upon themselves. The judges tried to let her down gently, suggesting that her voice might be better suited for Broadway, but when she informed them that she wasn’t going to leave without a golden ticket, Perry had to get real with her: “This is not how we listen to music.”

HARPER GRACE, 16 | Six years after going viral for her horrendous rendition of the National Anthem at a Major League Soccer match, this young Juliette Barnes two-stepped into the audition room and cleared her good name — not to mention her Google search — with the whip-smart original ditty “Yard Sale,” the second song of the night that Perry is plotting to steal.

LAYLA SPRING, 16 | After performing a duet with her adorable younger sister (whose name is Dyxie!), this Kentucky girl went solo with a bold performance of the Jackson 5’s “Who’s Lovin’ You.” It took some convincing on Perry’s behalf, but the judges ultimately decided to put her through, with Richie offering this chilling piece of advice: “Understand, you’re going into the fire.” It’s too soon to say for sure, but I think that saying weird, cryptic things to the singers might be Richie’s schtick. (Side note: Giving Dyxie her own golden ticket for 2026 may be a little presumptuous on Idol’s part, but now I’m really hoping ABC keeps it around long enough to make good on that promise.)

BENJAMIN GLAZE, 20 | There’s a slight chance I’m overreacting, but this was the kind of audition that makes you want a cold shower and a lobotomy. Like, red flag No. 1: The guy introduced himself by saying that he enjoys working as a cashier because it means female customers have to talk to him, explaining that “they’re not going anywhere without saying hi.” (Note to his manager: Keep an eye on those security tapes.) Glaze briefly redeemed himself when he got a kiss (his first ever!) from Perry, but then he went and ruined everything by completely butchering Nick Jonas’ “Levels.” I’m sorry to have to shout this, but “LEVELS” IS AN UNDERRATED JAM AND THIS IS NOT THE KIND OF EXPOSURE IT NEEDS. 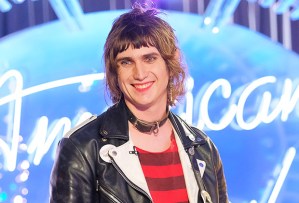 NICO BONES, 22 | I’d say that this guy probably shouldn’t have showed up hungover to his audition, but considering he came prepared with a song about his friends hating him for eating worms, I’m guessing he doesn’t really care what people think about him. Except for Perry, of course, who told him that he’s winning at life — even if he isn’t moving forward to Hollywood. (Side note: I couldn’t have been less surprised to learn that Bones works at a skate shop in California.)

NOAH DAVIS, 18 | There’s a chance you already fell in love with Davis — his special moment with Perry (“Wig!”) went viral earlier this week — but if Sunday’s premiere was your first encounter with him, you were in for a treat. Not only was the nursing major super charming (he just wants an alpaca!), but as heard in his rendition of Rihanna’s “Stay,” he also has the voice of a damn angel. Wig, indeed.

ALYSSA RAGHU, 15 | Speaking of killer vocals, this Orlando, Fla., native delivered arguably the night’s best performance, a dreamy rendition of Ariana Grande and Nathan Sykes’ “Almost is Never Enough.” Her performance, which caused Perry’s leg hairs to stand on end, even earned another weird, cryptic quote from Richie: “At 15 years old, this is not supposed to be happening.” The judges predicted they’ll see her in the Top 10.

SARDOR MILANO, 26 | I have so many questions about Milano, who apparently won The X-Factor in Russia in 2015: What passes for “music” in Russia? Isn’t three years a little soon to throw in the towel and go back on another reality show? And, most importantly, what products does he put in his “superstar hair” that Ryan Seacrest couldn’t stop gabbing about? 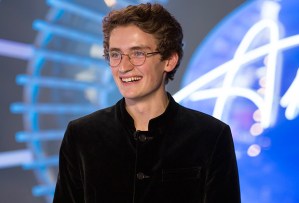 ZACH D’ONOFRIO, 17 | The kids at school may make fun of him for his voice — not for his extensive sock collection, though I suppose bullies tend to grab low-hanging fruit — but no one was laughing when D’Onofrio laid down those golden(ish) pipes with a performance of Frank Sinatra’s “The Way You Look Tonight.” I don’t expect him to last much longer in the competition, but at least he can always say he danced with Perry.

DENNIS LORENZO, 26 | It turns out the Fresh Prince wasn’t exaggerating about life in West Philadelphia; Lorenzo said he was heading down a dark path after his father’s murder, but a gift at 16 from his grandparents (a guitar!) helped him turn it all around. Playing a guitar with a hole in it, Lorenzo delivered a soulful rendition of Alan Stone’s “Unaware,” wowing the judges and earning him the final golden ticket of Sunday’s premiere.

Your thoughts on these (or other) contestants? The judges? The show in general? Vote in our polls below, then drop a comment with your take on the new Idol.