I remember it vividly, joyfully — but not just because the exceptional Haley Reinhart (who’d been enduring egregious sabotage from judges Jennifer Lopez and Randy Jackson) improbably survived over rocker dude James Durbin. Mostly, the date is blazed into my memory because of a surprise delivery I’d received a few hours earlier from the New Jersey State Division of Youth and Family Services: Three-month-old foster twins, ridiculously cute boys whom my husband and I had only learned about earlier that morning.

With one or both of the little bundles zzzing on my lap or gulping down bottles of formula, I managed to watch (and take notes on) the unexpected continuation of Haley’s underdog run — then crank out a 1,162-word recap of the episode that included a lyrical parody of Jordin Sparks’ “This Is My Now” fueled by giddy adrenaline and the not-entirely-digested realization that our lives would never again be the same.

On the eve of Idol‘s series finale (tonight, 8/7c on Fox), as I reflect on what the show has meant to me, it’s astonishing how this admittedly cheesy, endlessly hopeful and sometimes infuriating reality competition series became inextricably linked to so many of my personal and professional milestones.

Even before I began recapping Idol for a living, I found myself freakishly obsessed with the show. I can recall throwing a viewing party for the Season 3 performance finale — with an invitation that sternly insisted on a prompt 7:30pm arrival time and total silence during Fantasia Barrino’s musical performances. (This was the pre-DVR era, after all!) When friends of friends had the audacity to arrive in the middle of ‘Tasia’s “All My Life,” I seriously contemplated murder — but then realized I probably wouldn’t be able to clean up the gore by the time the commercial break ended and my R&B goddess’ showdown with plucky Diana DeGarmo continued. 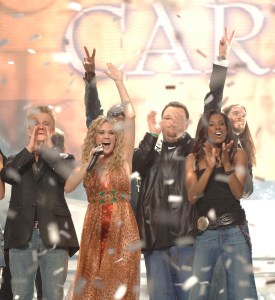 Six months later, when I got hired by EW.com and learned there was an open slot to recap Fox’s ratings juggernaut, confetti rained down on my head, as “A Moment Like This” blared through unseen speakers.

That gig allowed me to find my voice as a writer. My tentative first stabs into first-person opinion — yes, folks, I still think Aloha Mischeaux* deserved a Top 12 berth based solely on her funky “Work It Out” — became bolder, my skin grew thicker and my fascination with food-based metaphors rose like dough flamed by the heat of passionate readers who braved the indignities of dial-up and hinky message-board technology to tell me why I was so boneheadedly wrong for insisting Bo Bice deserved the Season 4 crown over eventual global superstar Carrie Underwood. For the record, even with the gift of hindsight, I’d still have cast my vote for the shaggy-maned rocker… which is no knock on Carrie’s incredible development as an artist in the 11 years since. (*I implore you to check out Aloha’s new band The Knuckles. Their new music — especially “Love Potion” — is straight fire.)

Back in 2005, that critic/writer back-and-forth felt weird and exciting and sometimes a little scary (like that time a reader posted that I should have my throat slit with a dull, plastic blade), but it also made me realize how personally the Idoloonie nation took its duties. And that realization became even more clear to me in the age of Twitter and Facebook, and after I made the leap to my current home at TVLine in 2011. 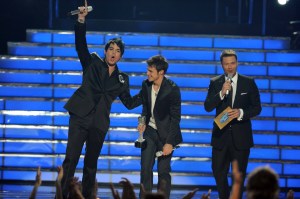 With record labels and radio stations consolidating — investing more in Auto-Tune and taking fewer chances on outliers — Idol was our annual opportunity to wrestle back control of the process, to reward one tremendously talented kid with a life-changing opportunity. So, whether you were #TeamKris or #TeamAdam, fancied David Cook or David Archuleta, or spent six years frustratedly wondering “What’s a woman got to do to take home the title?”, there was something undeniably beautiful — and a little innocent — about the process… regardless of the way the show’s producers and judges increasingly tried to manipulate the process.

That celebration of talent over connections, the idea that hard work and creativity could transcend circumstance, appealed to this scrawny, gay kid who’d grown up in upstate New York obsessively tracking the Billboard singles charts and strategizing how I was going to survive gym class and go on to make a life for myself in the big city (any big city, really). That very same kid found his way to the surface during Idol: dancing on the living room couch, shouting at the judges in a blind rage and voting into the wee hours of the morning every season from Tamyra Gray through La’Porsha Renae. Oh, and he cried. A lot. Blubbering during David Cook’s “The World I Know.” Sobbing during Allison Iraheta’s exit rendition of “Cry Baby.” Weeping with some strange combination of joy, pride and release  during Candice Glover’s epic one-two punch of “Don’t Make Me Over” and “Lovesong”in Season 12.

I’m pretty sure if you’ve made it this far into this blog post — I can hear Simon Cowell’s voice in my head, snarking that it’s “utterly indulgent” — you not only understand my myriad emotional responses to the show through the years, but you’ve experienced them yourself.

For me, Idol was never about the cruelty of the auditions — they were something to be endured, rather than celebrated — or the faces who appeared on the judges’ panel. (Nevertheless, Simon’s tart honesty ranks him at No. 1 on my list, while the arrival of Ellen DeGeneres in Season 9 signaled producers’ fatal miscalculation that bigger celebrities could/should be the cornerstone of The House That Kelly Clarkson Built.) 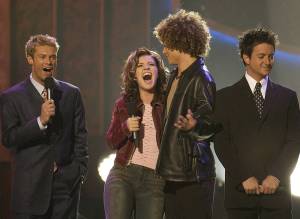 Ultimately, Idol‘s hundreds of finalists and semifinalists — and even those undeniably talented young’uns who disappeared without explanation during Hollywood Week and the Green Mile episodes — are responsible for the show becoming a pop-culture phenomenon. Kelly Clarkson’s transformation from goofball to goddess in the summer of 2002. The nail-biting dread of Season 4’s Top 4 results show. Gentle Brooke White flubbing her intro to “You Must Love Me” in Season 7. (Oh, do check out her post-show tunes, too, please!) Wednesday night’s jaw-dropping singoff between Trent Harmon and La’Porsha Renae. (Can the farewell season maybe end in a draw?) Those who never watched Idol or dismissed it as reality garbage knew not what they missed: It was great TV.

I’ll miss Ryan Seacrest’s cheerful, effortless hosting. I’ll miss drumming up misplaced optimism — and then getting disappointed all over again — by the producers’ anemic lists of song choices. I’ll miss that rush of blood to the head when you hear the first few notes from a sensational singer who’s just made you a fan for life. I’ll miss taping Reality Check with “Season 6 standout Melinda Doolittle” — a vocalist so sublimely talented, I will never stop believing she’ll be the show’s next Jennifer Hudson-esque, “Oh, America really did mess that one up!” breakout success story.

Of course, just because Kieran will permanently dim the lights in the Idoldome tonight doesn’t mean my work here at TVLine is done. I’m still recapping The Voice and Chasing Destiny and So You Think You Can Dance and a boatload of scripted series, too. It’s just that, to paraphrase a rock classic covered by Carrie, Haley, Jax and Kree — and even Asia’h Epperson — Idol took a piece of my heart (and is hours away from breaking it, too.) 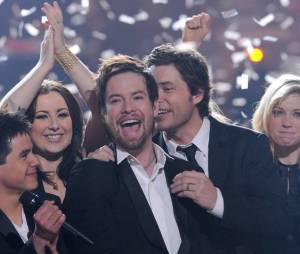 Still, someday, when Fox or another network (or the mobile device that’s going to be implanted in all our noggins) revives the format, I hope my own boys won’t yet be grown and off to college, that they’ll plunk down on the couch with their hopelessly uncool papa and let themselves succumb to Idol‘s singular, silly charms. Some people wait a lifetime for a moment like that. I’ll start the countdown clock Friday morning.