“I don’t kill people. Because I’m not a murderer.”

Less than five minutes into the Season 2 premiere of Marvel’s Jessica Jones, our titular heroine is forced to utter that sentence to her latest private investigation client, who wants Jessica to kill a philandering lover. But Jessica angrily refuses to do so, maintaining that she’s not some kind of monster — and it seems she’s trying to convince herself as much as her client.

Jessica Jones‘ second season — which dropped on Netflix Thursday, aka International Women’s Day — takes place after the events of last summer’s Defenders; not only does the general public know that powered people exist, but everyone in New York City seems to know that Jessica ended Kilgrave’s life a few months back — and that must make her a vigilante superhero, right?

But Jessica has no interest in that two-word moniker. When we catch up with her in the premiere, she’s drinking more than ever and only taking on P.I. cases that don’t have emotional backstories, lest she actually feel something. Her best friend, Trish, meanwhile, has been talking about powered people almost constantly on her radio show, making it harder for Jessica to move past the whole Kilgrave thing. 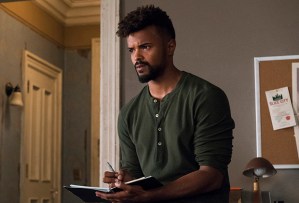 All of this comes to a head when Trish gets her hands on a file from the hospital Jessica stayed at after her family’s fatal car accident 17 years ago. And the file contains a worrying tidbit: Though Jessica had been admitted to that hospital immediately after the accident, she wasn’t assigned a bed until 20 days later. So, where was she during that time? What was being done to her off the record? And is it possible that IGH — the company that mysteriously paid all of Jessica’s medical bills — used these 20 days to experiment on Jessica and turn her into the superpowered woman she is now?

At first, Jessica has no intention of answering those questions. “I can’t change the past,” she tells Trish, clearly reluctant to dredge up the painful memories of her family’s death. But in the hour that follows, she (1) assaults a competing private investigator, Pryce Cheng, after he presumes to know her history with Kilgrave; (2) watches a fellow powered person, “The Whizzer,” get crushed under fallen scaffolding, after she repeatedly ignored his conspiracy theories about someone wanting him dead; and (3) begins to wonder if perhaps Trish is right. Maybe IGH did mess her up in those 20 days.

Jessica finally gives in and starts investigating IGH, easily tracking down a nearby building that houses all sorts of old medical equipment. And when she turns to snap a photo of one particularly dingy hallway, Jessica suddenly has a memory of being in this exact building when she was young, crying as she was strapped down to a bed and wheeled into a room where nothing good could have possibly taken place.

“Something happened behind these doors. We were made here. Me, Whizzer… and something else,” Jessica narrates, flashing to another fuzzy memory of a burned and deformed man in that building. “Whatever it is… the only way to find it is to open the door wider.”

OK, your turn. How did you feel about Jessica Jones‘ first episode back? Grade it in our poll below, then hit the comments with your thoughts!