Still reeling from the news that Season 14 of Grey’s Anatomy will be Arizona’s last? You’re not alone. But, while we’ve been trying to wrap our heads around the notion of the ABC drama without Jessica Capshaw, who joined the cast in 2009, those same heads of ours have also been coming up with ideas about what might constitute a proper sendoff for her beloved character. The best of the bunch (so far):

ARIZONA REUNITES WITH CALLIE | A long shot, sure. But suppose the ex-wives realized that Carina was no more the one for Robbins than Penny was the one for Torres, and decided to start over with daughter Sofia someplace altogether new? Puts a whole new spin on “Let’s all be happy,” eh? 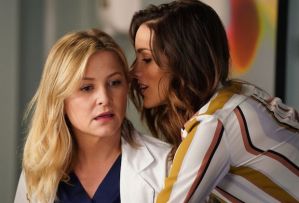 ARIZONA MOVES TO NEW YORK WITH CARINA | Since the chemistry between Robbins and DeLuca’s sister is off-the-charts hot, and since their research into maternal mortality could be done anywhere, the lovers could move to Manhattan so as to save Arizona from having to time-share Sofia.

ARIZONA GETS A NEW OPPORTUNITY | We always felt like there was unfinished business between Robbins and onetime mentor Nicole Herman. So what if it was a job offer from the now-blind fetal surgeon that drew her away from Grey Sloan and Carina?

ARIZONA DIES | It pains us even to type this one out, so horrific is the suggestion. But this is Grey’s Anatomy, and the show does like to break our hearts. (Right, Derek? George? Mark? Lexie? We could keep going… )

So, do any of these scenarios sound right to you? Or do you have a better suggestion? Either way, hit the comments.