The minute Amelia declared, “I miss sex!” in the promos for Thursday’s Grey’s Anatomy, we all assumed that somebody was gonna be getting it on, right? That made the only question, which twosome? The commercial made it look like it was going to be Amelia and her ex, Owen — which, being too obvious, made me think, like it or not, it was instead going to be Maggie and Jackson, especially since the game night that Pierce threw was for the sole purpose of allowing Meredith and Amelia to judge their sis’ new beau, Clive. (The show loves to try to throw us off like that, after all.) Or maybe even that herring wasn’t red enough, and it was going to be Meredith and Dr. Cerone, the owner of the polymer patent she and Jo need? (There’s no saying he has to be the Wilford Brimley kind of older man.) So, who, if anyone, done it? Read on and find out… 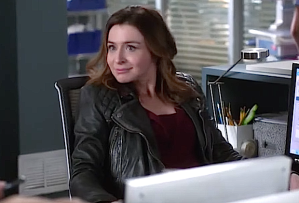 ‘HE’S NOT A SERIAL KILLER, HE’S TOO NICE’ | As “Games People Play” began, Clive was delighted to be Maggie’s “dirty secret” since she wanted to sneak him out of the house without the kids seeing him. Shortly, at Grey Sloan, Amelia remarked that hearing Maggie and Clive going at it every night through the house’s thin walls had left her with sex on the tumor-free brain. It wasn’t bothering Mer, though. Her sex drive had become her work drive, she said. Plus, she had “a really excellent back massager.” When Maggie admitted that she thought she might actually like Clive — for more than nookie, that is — but couldn’t be sure since her late mom had always told her whether her boyfriends were keepers, Amelia suggested forming a “sister panel” to weigh in. They’d hold a game night, it was decided. “And he’ll have no idea,” Amelia said, “that the real game is us judging him!” Hilariously, Helmouth, having overheard, thought that she and Levi had been invited.

‘YOU CUT A GIRL’S EAR OFF!’ | In the ER, April was treating a young patient named Sarah who’d come in with her school’s rugby team when holy crap! A flyaway ball knocked the doc, resulting in the girl’s ear pretty much being sliced off. Right on cue, DeLuca slipped on it and got himself a pre-concussion, per Amelia’s MRI. When Maggie looked in on Sarah, she noted a “lotta vibes” between Pierce and Jackson. Afterwards, when the guy who’d thrown the ball refused to be treated by the ear-slicer, Kepner gleefully assigned to him Levi. But her day was about to get way worse: Owen sent her home while legal looked into the ear-slicing incident that had opened Grey Sloan up to a massive lawsuit. Meanwhile, as Sarah focused as much on a potential cure for her heart ailment as her Van Gogh’d ear, she kept pointing out the vibes Maggie was giving off regarding Jackson — even when all she’d done was say his name. 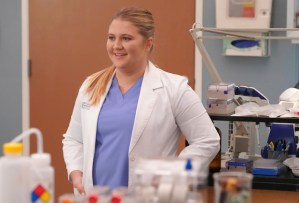 ‘YOU WERE A DISEMBODIED GIGGLE’ | In the lab, Jo revealed to Mer that their test on a mouse had been a success. But their celebration was supremely short-lived. They couldn’t even show Cerone the critter since they’d used his patent without permission. In no time, Helmouth came in with even worse news: Cerone was dead. (Guess that ruled him out as a potential hookup for Mer or anybody.) In fact, he’d died last week. So Mer and Jo were actually meeting with his daughter, Marie… who it turned out was an old family friend, the kind of old family friend that gets away with calling her “Mer-Mer,” even. (Wouldn’t that have occurred to Grey before she came face to face with the woman?) Catching up with Mer, Marie said she’d really wanted to get in touch when her dear friend Ellis died. But she’d been watching and was sure Mer’s mom would be proud. Alas, Marie refused to sell the patent based on Mer-Mer’s theory. “Helm,” Grey said, “get the mouse.”

‘I LIKE A MAN WITH AUTHORITY’ | When Owen put the rowdy rugby players in their place military style, Amelia couldn’t help but be turned on. (At the same time, Koracick was still circling Amelia like a hungry shark.) In the O.R., Maggie invited Jackson to game night. He could bring someone, she added. So he was going to bring Priya. Luckily, Sarah’s surgery went well. She even settled down her dad, a malpractice lawyer eager to lower the boom on Grey Sloan. Nauseous from her treatment, Kimmie asked Alex to get her some medical marijuana. It was her grandma’s idea, she said. And given that Kimmie was at that moment puking, there was no way he could say no. But could he actually get it for her? He did, but then it turned out not only hadn’t this been Grandma’s idea, she was so vehemently opposed to it that she fired Karev. In DeLuca’s room, he had a hard time recuperating since his sister and Arizona were busily doing research for their project in there. Elsewhere, Sam fretted so over DeLuca that Amelia advised her to just tell him she loved him already.

‘MY GOD, YOU ARE YOUR MOTHER’S DAUGHTER’ | When Mer and Jo revealed that their mouse had new livers and was alive and well, Marie couldn’t help but be impressed — by how Ellis it was of her to have used the polymer without permission. Rather than go to dinner with Grey, Marie was headed back to her hotel to drink a mini-champagne and crash. They could discuss price the following day. When Richard caught a glimpse of Marie leaving, he asked Mer if she was less angry now. Turned out, Marie and Ellis had only been BFFs until… dun-dun-DUN… they weren’t anymore. 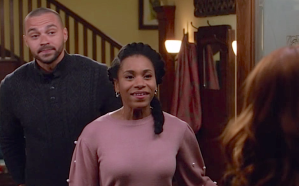 ‘YOUR PARENTS MUST BE THRILLED’ | At game night, things went from awkward to super awkward faster than April could ring the doorbell. Even before she arrived, Maggie was doing much too much nervous laughing around Jackson and Priya. And when Kepner did come knocking, she guessed from the way Maggie and Jackson looked in the doorway that they were already a thing. Did she want something to drink? Nah — she’d brought her own. “This looks like a rager,” cracked Koracick when he walked in on the sorry scene. (“Please don’t let him hook up with April!” I cried even as it looked more and more like that was gonna happen.) Watching the couples canoodle, Kepner’s mood went further and further south. She eventually got so intense about the rules of the games that she earned a slow clap from Koracick. Just then, the doorbell rang — it was Clive’s wife!

‘I’M A HOMEWRECKER’ | When Sam went to see DeLuca, he suggested that they were older and less dumb than they’d been the first time around. And she’d never just been sex to him, he said. “I love you, too,” she replied. Off Carina’s review of an OB’s records, Arizona pointed out to her now-former friend that her rate of C-sections — seemingly for convenience’s sake — was through the roof. Alex appealed to Kimmie’s grandma not to associate medical marijuana with insta-addict, and she ultimately relented. As game night broke up along with Maggie and Clive, Koracick gave a soused April a lift. (And, per scenes for next week, aw, man — a whole lot more.) Back at Grey Sloan, Owen, off his patient’s outburst about things left unsaid, thanked Amelia for making their split so easy. Was he grateful enough, she asked, to let her use him for sex? “Use me in every way you can think of,” he said enthusiastically. And then it was truly game on. 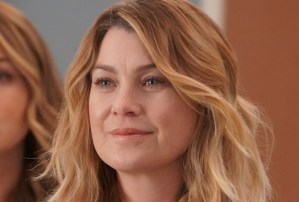 ‘I GOT PLAYED’ | As the episode drew to a close, Levi and Helmouth actually showed up at Mer’s for game night, then Jackson returned, having told Priya that they were through. “All the time I’m with her,” he told Maggie, “I’m thinking of you.” So, risks be damned, wouldn’t she go on a real date with him? And the more he described the date, the closer he got to her until finally they were kissing. And OK, there was some heat there. At that very moment, Mer burst in, but she was so intent on finding her mom’s journals that she didn’t even seem to notice Jaggie smooching. As far as Mer could tell, Marie had played her — gotten her whole theory and procedure out of her, and now planned to use it herself. Yikes!

So, what did you think of the episode? Jaggie’s kiss? Omelia’s hookup? Hit the comments.