We made it, Bachelor fans: After ten weeks and an endless three-hour season finale, Arie Luyendyk Jr. finally made his choice between Becca and Lauren. And then… he changed his damn mind. (Yep, we’ve got another Jason Mesnick on our hands, people.)

To be fair, host Chris Harrison did prepare us for a chaotic night with an ominous introduction promising that Monday’s finale would make Arie “the most controversial Bachelor in history” (!) and teasing that, for the first time ever, we’d see the season’s final moments unedited (!!). (They even had Mesnick on to offer commentary!) The bulk of the finale was padded out with the usual pointless filler — Arie’s in love with both women, he can’t decide, Peru is enchanting, blah blah blah — so let’s skip ahead to the good stuff, shall we? 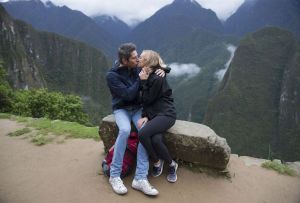 Entering his final date with Lauren, Arie claimed that his mind was already made up: He was choosing Becca. But then Lauren looked so cute while climbing Machu Picchu, and he got confused! But then he had his final date with Becca, and she made him a scrapbook, and he got even more confused! “The hardest breakups are the breakups you don’t see coming,” he lamented during a post-date confessional. Well, maybe then you shouldn’t have told both women you love them a hundred times, huh, buddy?

Still, leading into the traditional Neil Lane ring selection scene, Arie (again) claimed he knew which woman’s finger he’d be sliding that rock onto. And when the ladies’ SUVs pulled up for the fateful reveal, Lauren got out first — traditionally the loser slot. While she professed her love, he started shaking his head and sobbing, telling her, “I can’t go through with it… I gave it everything I had to see if it could work.” She cried (“I’m extremely confused”), he cried, they hugged, llamas looked on impassively… a typically heart-wrenching Bachelor goodbye. Lauren did wonder about Arie’s indecision, though: “How could you get down on one knee if you weren’t sure three hours ago?” Good point, Lauren!

So then Becca pulled up, and the fairy tale began, right? They exchanged love speeches, and Arie got down on one knee, telling Becca: “I choose you every day from here on out.” He asked her if she’ll marry him… and she said yes! But she did drop the final rose (foreshadowing!), and there was still almost an hour left… During a montage of Arie and Becca’s first days together as a happy couple, he admitted, “I go to bed and I think about Lauren, and I get up and I think about Lauren.” And Becca knew he wasn’t over her! “I have to follow my heart,” he declared. “I really feel like I made a mistake.” So he decided to call off the engagement and break up with Becca to give Lauren another shot.

RELATED UnREAL Season 3 Premiere Recap: Oh, So This Is What a Feminist Looks Like?

But poor Becca didn’t know any of this. So when she showed up for “a happy couple weekend with Arie” in L.A., she got ambushed by Arie, who had some very bad news for her. (This is the “real and raw” unedited part Harrison promised.) With an awkwardly intimate split-screen showing both of their reactions, a teary Arie told Becca he wants to reconcile with Lauren. (Becca’s response: “Are you f–king kidding me?”) He babbled on about being “conflicted,” but she cut him off, telling him he was never ready to get engaged: “You shouldn’t have gotten down on one knee.” She finally ordered him to leave, so we could listen to her cry alone for several minutes. (Classy move, Bachelor producers!) 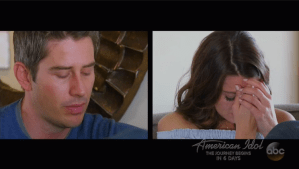 Arie didn’t even have the decency to walk away, forcing her to choke out, “What did I do wrong?” in between sobs. She finally sat down with him, and he offered a string of half-hearted apologies while she cried: “I feel like my future was ripped away.” Finally, she told him (again) to leave, and after a few more excruciating beats of lingering, he left. More crying. Brutal. Becca did join Chris Harrison live for a brief chat (and a much-deserved ovation), admitting, “I felt betrayed… because I was lied to for so long.”

We did get a hint about all this when ABC moved the traditional “After the Final Rose” post-season interview with Arie and his chosen lady to Tuesday night at 8/7c and bumped it up to a full two hours. Both Lauren and Becca will be on hand tomorrow night for a friendly chat with Arie. (Will Lauren even want this fool after all this?) Plus, next season’s Bachelorette star will be revealed. Hey guys, Becca is available!

Alright, Bachelor Nation: Chime in on Arie’s place in history in our poll below, then hit the comments with your take on the grand finale.