UnREAL is back with its first female “suitress” — and Rachel and Quinn might be wishing they just went with another easily manipulated hunk instead.

Monday’s Season 3 premiere seems to be well aware of last season’s infamously bad sophomore slump: It opens with Quinn tracking Rachel down at a New Age-y retreat and tells her Everlasting is now on the verge of being cancelled after how badly last season went. (Oh, you don’t say?) But Rachel is perfectly happy floating in lakes, herding goats and practicing “essential honesty”: telling the uncensored truth at all times, to everyone. Yeah, that’s not going to mesh well with producing Everlasting.

Quinn wins her back, though, when she pitches the idea of the show’s first-ever “suitress” (still not sure that’s actually a word): Serena Wolcott, an icy blonde tech investor played by Masters of Sex alum Caitlin FitzGerald. Chet’s onboard — he sees feminism as a marketing opportunity, basically — but the new network executive in charge of the show warns Quinn that if this season flops, she’s fired. Plus, Quinn has to worry about Rachel practicing her “essential honesty” on set; she tells Chet he’s an “overpaid, incompetent man-baby” to his face on the first day of shooting. (To be fair, he asked for it.) 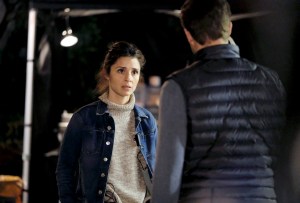 Oh, and did I mention Jeremy is back? And looking much more like Season 1 Jeremy (clean-shaven, in shape) than Season 2 (bearded, bloated)? His presence freaks Rachel out — you know, because of the whole “he killed two people last season” thing — and Chet, sensing a problem, collects Rachel, Quinn and Jeremy in a room and swears them all to a “blood oath” not to breathe a word of what happened last season. He’s serious, too: He pricks everyone’s finger and swears everyone to absolute silence. Hmmm… any bets on how long that’ll last?

On the plus side, Serena takes a quick liking to Rachel, telling her, “You don’t seem like a bulls–tter.” (Rachel’s reply: “I’m currently not.”) And Serena’s not shy about sharing her opinions: She rejects her opening-night dress, saying it makes her look like “a stripper mermaid.” (Which, fair enough.) When the SUVs full of guys arrive, we meet her romantic options, including a sweet firefighter with a daughter, a Wall Street charmer who plays hard to get, a shirtless ballet dancer and a dude sporting a man-bun fresh from the Peace Corps. (Totally Rachel’s type, apparently.) It’s nice to see the producers still applying the traditional “wifey” terminology to guys this season, too.

Serena balks, though, when she sees that a tiny jockey named Norman is one of the contestants. She senses he’s only there to be laughed at, and when Essentially Honest Rachel admits that she’s right, she wants him out. Plus, Serena lets it slip that she borrowed a producer’s phone to Google the Wall Street guy and check his credentials. (What have you unleashed here, Quinn?) Serena ends the charade, telling Norman the jockey he was only cast as a sight gag and cutting him on the spot. This sends Quinn into scramble mode, and in the ensuing chaos, Serena goes AWOL with Owen the firefighter, with the two sharing a nice, off-camera moment together — and even a kiss. 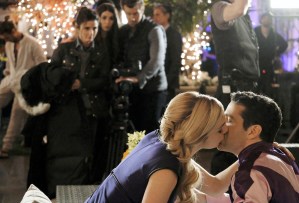 When Rachel finds her, she warns her to play ball, or else Quinn will edit her to make her look terrible: “No guy is ever going to want to date you.” She pushes Serena to kiss Norman to set things right, and after a few drinks, Serena obliges before descending into a wild night of dancing and drinking with the boys. (“That ass is officially stick-free,” Quinn declares.) But maybe that stick served a purpose: Rachel later walks in on Norman, um, riding Serena from behind in the bathroom. After puking up a pint of tequila, Serena confides in Rachel that she’s hopeless at love. All her friends are married and have it all figured out. They think she’s too picky, “but the truth is,” she admits, “nobody picks me.”

Rachel promises to help Serena find her Mr. Right — and Serena takes her first step toward that by defying Quinn’s wishes and dumping Norman at the first elimination ceremony. To further complicate matters, Jeremy interrupts Rachel flirting with Mr. Man-Bun to tell her he killed those two people “because you told me to,” and that he’s still in love with her. Oh, and young producer Madison is sleeping with the new executive and plotting against Quinn (“I don’t think she’s got it anymore,” she tells him), and Rachel realizes the show’s new therapist Dr. Simon is really just there to make sure she doesn’t go off the rails. Ahhh… it’s nice to have something resembling the old UnREAL back, isn’t it?

Is UnREAL bouncing back in Season 3? Give the premiere a grade in our poll below, then hit the comments with your post-premiere thoughts.